If Laura Ingraham Goes Down for 'Bullying,' You're Next!

Larry Elder
|
Posted: Apr 05, 2018 12:01 AM
Share   Tweet
The opinions expressed by columnists are their own and do not necessarily represent the views of Townhall.com. 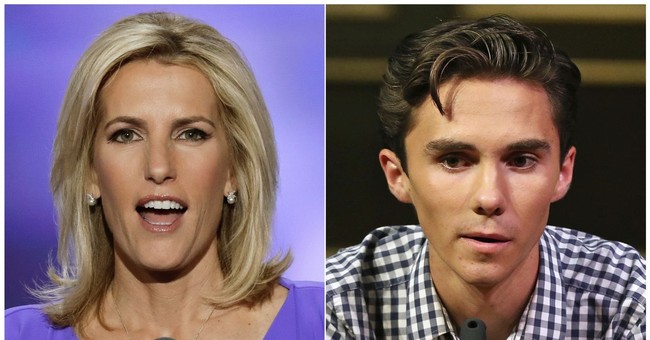 What did Fox News' Laura Ingraham say that cost her advertisers?

About David Hogg, the teenage Parkland, Florida, high school shooting survivor, Fox's Ingraham tweeted: "David Hogg Rejected By Four Colleges To Which He Applied and whines about it. (Dinged by UCLA with a 4.1 GPA...totally predictable given acceptance rates.)" Insensitive, given the mass shooting that killed 17 at Hogg's high school? Yes. Insulting and condescending coming from an Ivy League-educated lawyer? Yes. But the punishment does not fit the crime.

Hogg urged Ingraham's advertisers to drop her show. Several did. Ingraham apologized, but Hogg refused to accept her apology. He called her a "bully" and wants Ingraham to extend her apology to others she offended: "She told Lebron James to shut up and dribble. I don't see any apology for those people. ... I would only consider (going back on her show) after she apologizes to all the people that she's hurt throughout her professional career because of her immaturity and unprofessionalism."

Two weeks after the Parkland shooting, Hogg gave an interview to The Outline, in which the writer described Hogg as "exhausted" and "still traumatized." Hogg said:

"What sick f-----s out there want to continue to sell more guns, murder more children, and honestly just get reelected. What type of s----- person does that? They could have blood from children splattered all over their faces and they wouldn't take action, because they all still see these dollar signs."

Referring to Republican Florida Sen. Marco Rubio and money contributed to him by the National Rifle Association, Hogg said: "What about the $176,000 you took for those 17 people's blood?"

But Ingraham is a "bully"?

Now does this "Ingraham Standard" apply to, say, CNN's Anderson Cooper? Frustrated at what he perceived as his guest's blind defense of President Donald Trump, Cooper said, "If (Trump) took a dump on his desk, you would defend him." Cooper apologized, but, then, so did Ingraham.

What about Time Warner's "Real Time With Bill Maher" show on HBO? Here are some of Maher's greatest hits on conservative women:

Sarah Palin is a C-word -- an offensive slang word for female genitalia.

Sarah Palin's son, who has Down syndrome, is "retarded."

The Rev. Al Sharpton, an MSNBC host, has an exhaustive list of offensive, incendiary, anti-Semitic comments. At a rally in Harlem in 1991, Sharpton said, "If the Jews want to get it on, tell them to pin their yarmulkes back and come over to my house." A few days later, a 7-year-old black boy was accidentally hit and killed by a car driven by a Jew in the Crown Heights area of Brooklyn, New York. Immediately after the young boy's death, three days of anti-Semitic rioting ensued in Crown Heights, where two people died and almost 200 were wounded. Surrounded by a mob yelling, "Kill the Jew!" a young Talmudic scholar was stabbed to death. Many believe Sharpton's rhetoric played a role in fomenting the Crown Heights riots. A Columbia University professor called it "a modern-day pogrom."

At the 7-year-old boy's funeral Sharpton said: "The world will tell us he was killed by accident. Yes, it was a social accident. ... It's an accident to allow an apartheid ambulance service in the middle of Crown Heights. ... Talk about how Oppenheimer in South Africa sends diamonds straight to Tel Aviv and deals with the diamond merchants right here in Crown Heights. The issue is not anti-Semitism; the issue is apartheid. ... All we want to say is what Jesus said: If you offend one of these little ones, you got to pay for it. No compromise, no meetings, no kaffeeklatsch, no skinnin' and grinnin'. Pay for your deeds."

If Ingraham is a "bully," what do you call MSNBC's caustic, Trump-hating lineup of hosts? Apply the Ingraham Standard to MSNBC's Chris Matthews. Angry with the Republican opposition to Obamacare, Matthews tore into the GOP and accused the Party of wanting "people who don't have insurance to die on the gurney."

As for Hogg, especially when complaining about "parents," he sounds like a teenager. Oh, wait, he is.

Latest Revelation About Liz Cheney Has to Be the Final Stake in Her Political Career
Townhall
Jonathan Turley finds Biden DOJ effort to circumvent a Trump commutation 'deeply concerning'
Twitchy
DOJ Pokes Another Stick in Trump's Eye - It Will Retry a Man Donald Trump Granted Clemency To
Redstate
Yes, They're Going to Arrest Donald Trump. Deal With It.
PJ Media