Larry Elder
|
Posted: Nov 02, 2017 12:01 AM
Share   Tweet
The opinions expressed by columnists are their own and do not necessarily represent the views of Townhall.com. 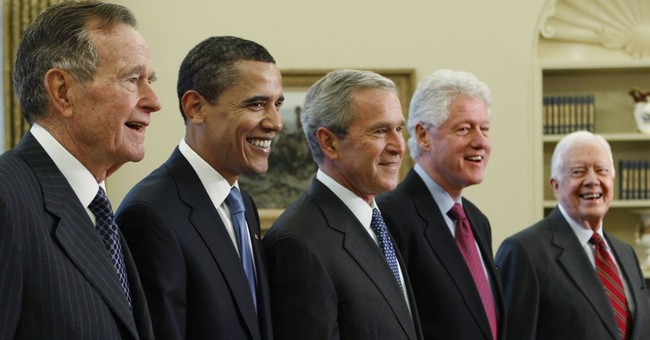 All five living former Presidents recently came together at a benefit concert for victims of this year's devastating hurricanes. A month earlier, they broadcast an appeal for Americans to donate for hurricane relief efforts.

But the former presidents' records of expanding government belie their rhetoric about the generosity of Americans.

In the case of President Carter, in 1978, he created FEMA, the Federal Emergency Management Agency, displacing, in some cases, much of the local, state and private sector assistance that the distressed once relied on. But after Carter established FEMA, something interesting occurred. The country experienced an uptick in declared natural disasters, which triggered an influx of federal money. FEMA was intended to handle civil defense and public evacuations and to ensure continuity of government in the event of nuclear or other attacks. But after FEMA was determined to have mishandled the response to Hurricane Hugo in 1988, the Loma Prieta earthquake in San Francisco in 1989 and Hurricane Andrew in 1992, President Clinton reorganized it, elevating the organization to Cabinet status. It is no surprise that states and localities started relying on the Feds more and spending less on things like snow-removal equipment, freeing the money for other projects.

Carter also signed the Community Reinvestment Act to encourage banks to lend to "underrepresented minority" loan applicants. President Clinton put teeth into the law, which, among other factors, had the effect of altering lending standards for the entire industry. If Presidents Carter and Clinton believed in American generosity, why force lenders to do that which their basic kindness would have them do anyway?

In the case of President George Herbert Walker Bush, he signed the Americans with Disabilities Act. Despite its noble name and intentions, the ADA actually made it (SET ITAL)more(END ITAL) difficult for a job applicant with a disability to find employment. "Since the highly touted Americans with Disabilities Act passed ... a decade ago," reported the Los Angeles Times in 1999, "supposedly offering new protections for the disabled, things have worsened significantly. ... During the Clinton administration, unemployment of working-age people with disabilities has soared from a horrendous 66 percent to a disastrous 75 percent. For those with severe disabilities, for example those who cannot walk, the unemployment rate, once 87 percent, is rising."

What explained the uptick in unemployment? Though ADA supporters claimed the act provided incentives for both employer and prospective disabled employee, the law of unintended consequences kicked in. Employers worried, "Will I face a lawsuit should I need to fire a disabled person? How much must I spend in order to 'accommodate' a disabled employee?" If President Bush 41 truly believed the things he says about American generosity, and his rhetoric and about our nation's "thousand points of light," why force an employer to be charitable?

President George W. Bush, to deal with the carnage caused by the government intrusion into the housing market, bailed out banks and other institutions with TARP, the Troubled Asset Relief Program. So we experienced even more government intrusion into the housing market in response to the damage caused by forcing lenders to, in essence, practice generosity.

Former President Obama, of course, signed into law Obamacare, in large part because the left feels health care is a right and that private insurance should be forced to sign those with pre-existing illnesses. So much for the charity of Americans to deal with those who cannot otherwise afford health care or health care insurance.

Now Clinton deserves credit for signing the welfare reform act of 1996, which for the first time put caps on welfare along with time limits. Able-bodied and able-minded people got off the couch and into the job market. But for the most part, these presidents, while in office, expanded the federal government to do things that could and should be done by the very same American people they insist are so compassionate.