Trump? What About the 'Chaos' in the Clinton White House?

Larry Elder
|
Posted: Aug 03, 2017 12:01 AM
Share   Tweet
The opinions expressed by columnists are their own and do not necessarily represent the views of Townhall.com. 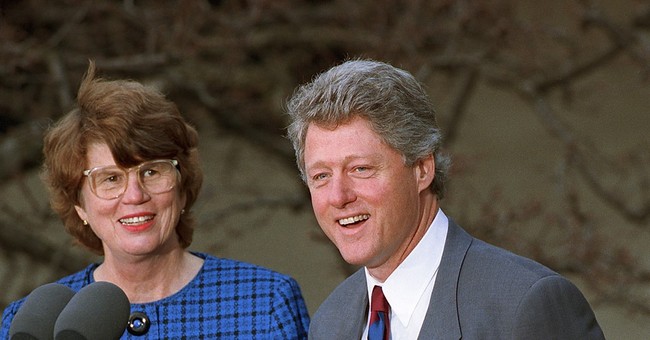 In a newspaper piece about a White House in turmoil, a prominent paper described an atmosphere of beleaguered aides confused by their unscripted boss, a man who needed a "rudder on what many believed was a loose and listing ship."

This is not from a recent piece about President Donald Trump's White House. The Washington Post, in 1997, wrote this about President Bill Clinton and the state of his presidency in mid-1994. The White House staff, wrote the Post, "was suffering from what increasingly looked to be callowness and naivete." Enter veteran congressman and new chief of staff Leon Panetta, who learned, as he put it, that "no one had an organizational chart." He added, "As far as I know, anybody who walked down the hall walked in (to the Oval Office)." Clinton, whose approval ratings were at one time about as bad as Trump's, went on to an easy re-election.

As to Trump's changing of White House personnel, President Barack Obama, over his two terms, had five chiefs of staff. One "interim" chief of staff lasted less time than did Reince Priebus. Bill Clinton and Ronald Reagan, two-term presidents, had four each.

Obama had four secretaries of Defense, more than Clinton and Reagan. In the case of Obama's first three, upon departure, they had significant policy differences with the boss.

Leon Panetta, Obama's second secretary of Defense, complained about what he considered Obama's poor leadership, one that "avoids the battle, complains and misses opportunities." On Iraq, Panetta felt that Obama "kind of lost his way" when he pulled out all the troops over Panetta's objection.

Obama declared a "red line" in Syria, that the U.S. would strike if Syria used chemical weapons. Panetta criticized Obama's flip-flop, which left the decision to Congress, which, Panetta says, was, "as he well knew, an almost certain way to scotch any action." This hurt America's credibility, Panetta said, because "the power of the United States rests on its word, and clear signals are important both to deter adventurism and to reassure allies that we can be counted on."

On Obama's deliberation over whether to intervene in Libya, Robert Gates, his first secretary of Defense, a holdover from the George W. Bush administration, wrote: "I was running out of patience on multiple fronts, but most of all people blithely talking about the use of military force as though it were some kind of video game." White House staff, said Gates, were "talking about military options with the President without Defense being involved."

He even said that Hillary Clinton and Obama both admitted that when they were in the Senate and opposed the Iraq "surge," they did so for political, not technical, reasons. Gates was shocked that they so candidly admitted it during a meeting he attended: "Hillary told the president that her opposition to the (2007) surge in Iraq had been political because she was facing him in the Iowa primary. ... The President conceded vaguely that opposition to the Iraq surge had been political. To hear the two of them making these admissions, and in front of me, was as surprising as it was dismaying."

Gates dismissed the then-pending Iran nuclear deal as a "hope" that Gates called "unrealistic": "The pursuit of the agreement is based on the President's hope that over a 10-year period with the sanctions being lifted that the Iranians will become a constructive stakeholder. ... That as their economy begins to grow again ... they will abandon their ideology, their theology, their revolutionary principles, their meddling in various parts of the region. And frankly, I believe that's very unrealistic."

Speaking of dysfunction, Obama's secretary of Defense No. 3, Chuck Hagel, said the Obama White House tried to "destroy" him even after he submitted his resignation, with some administration officials maligning him in anonymous comments to the media during his last days in office. "I don't know what the purpose was," he said. "To this day, I'm still mystified by that." Hagel reportedly battled the White House's micromanaging of the Pentagon. He claimed the chairman of the Joint Chiefs complained, "White House staffers were calling generals 'and asking fifth-level questions that the White House should not be involved in.'" These were serious criticisms by ex-secretaries of Defense about an incumbent president during wartime. Yet the media did not foam at the mouth.

This is not to say that there haven't been missteps, pullbacks and recalibrations at a dizzying rate in Trump's new administration. This stems from the top, and the recent personnel changes make it clear that Trump knows he needs discipline. Business and politics are two different creatures, as a frustrated President Trump has, no doubt, discovered. Building an ice rink in Central Park under budget and ahead of schedule is one thing. Getting a consensus on political issues like "repeal and replace" is quite another.

But few remember the tumult of the early Clinton months. If Trump succeeds in getting the economy humming at about 3 percent growth, the musical chairs of today will be a distant memory.