Larry Elder
|
Posted: Jul 06, 2017 12:01 AM
Share   Tweet
The opinions expressed by columnists are their own and do not necessarily represent the views of Townhall.com. 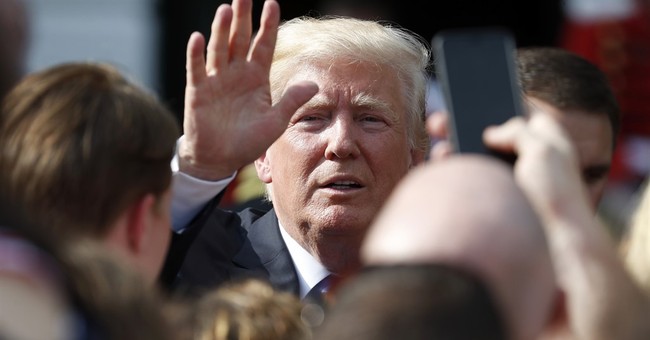 Critics hammered President Donald Trump for his "sexist" tweet in which he made fun of MSNBC's "Morning Joe" co-host Mika Brzezinski. Trump tweeted: "I heard poorly rated MorningJoe speaks badly of me (don't watch anymore). Then how come low I.Q. Crazy Mika, along with Psycho Joe, came to Mar-a-Lago 3 nights in a row around New Year's Eve, and insisted on joining me. She was bleeding badly from a face-lift. I said no!"

What did the morning show do to incur the President's wrath?

During recent shows, host Joe Scarborough, a former Republican member of Congress, called Trump "the greatest liar that's ever sat in the White House." He said: "I mean, to compare (former President Richard) Nixon to this guy is absolutely ridiculous. He lies every day. A lot of times he lies every minute. He forgets the lie that he told five minutes ago." He also said: "Nobody's saying what Donald Trump's doing now is right. In fact we think it's extraordinarily dangerous. Called the media enemy of the people. It's Stalinist."

House Minority Leader Nancy Pelosi, D-Calif., among other Democratic leaders, denounced Trump's tweet as sexist, demeaning and divisive. Pelosi, in 2014, actually said, "We never treated President Bush the way they treat President Obama." Maligning Republicans as stupid, racist fascists is so common that Democrats have probably numbed themselves to it.

About Ronald Reagan, Coretta Scott King said, "I am scared that if Ronald Reagan gets into office, we are going to see more of the Ku Klux Klan and a resurgence of the Nazi Party."

Justin Kaplan, the editor of "Bartlett's Familiar Quotations," said about Reagan (who was re-elected, 49 states to one), "I'm not going to disguise the fact that I despise Ronald Reagan."

About President George Herbert Walker Bush, Rep. Maxine Waters, D-Calif., said, "I would like to ... say ... very clearly that I believe George (H.W.) Bush is a racist."

2004 Democratic presidential candidate John Kerry, on election night, said, "I can't believe I'm losing to this idiot." Earlier that year, when informed that Bush just had an accident on his bicycle, Kerry said, "Did the training wheels come off?"

Unimpressed with the blacks Bush had in his Cabinet, entertainer/activist Harry Belafonte, in August 2005, said, "Hitler had a lot of Jews high up in the hierarchy of the Third Reich."

Billionaire Democratic contributor George Soros, in November 2003, said: "When I hear Bush say, 'You're either with us or against us,' it reminds me of the Germans. My experiences under Nazi and Soviet rule have sensitized me."

Al Gore, in October of 2005, said, to "control and intimidate" the news media, "every day (President George W. Bush's executive branch) unleash squadrons of digital brownshirts to harass and hector any journalist who is critical of the President."

Rep Barney Frank, D-Mass., in February 2006, accused George W. Bush of "ethnic cleansing by inaction" through his allegedly slow response to hurricane Katrina and its aftermath.

Sen. Hillary Clinton, in January 2006, said before an audience of blacks, "The House of Representatives has been run ... like a plantation -- and you know what I'm talking about."

As for President Trump and the presidential race, time and space do not permit even an abbreviated list of the near-pathological attacks. Here are just two. A 2015 column in GQ magazine on Ben Carson, now a member of Trump's Cabinet, was literally entitled, "F--- Ben Carson," using the actual four-letter expletive in the title. Howard Dean, former chair of the DNC, flat-out said, "(Steve Bannon's) a Nazi," referring to the top Trump adviser.

Let's remember that Bill Clinton, not Trump, tried to get Ted Kennedy to support Hillary in 2008 by saying, "A few years ago, this guy (Obama) would have been getting us coffee." Democratic leader Sen. Harry Reid, D-Nev., not Trump, said then-presidential candidate Obama could succeed because he was a "light-skinned" black "with no Negro dialect, unless he wanted to have one."

Tell us again, who are the "racists"? Democrats better hope Trump doesn't tweet about that.