Larry Elder
|
Posted: Apr 20, 2017 12:01 AM
Share   Tweet
The opinions expressed by columnists are their own and do not necessarily represent the views of Townhall.com. 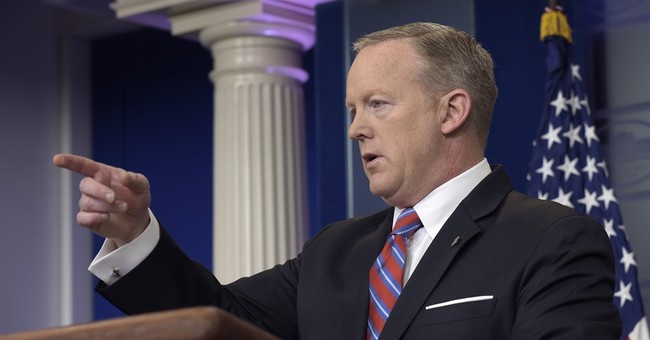 Trending
Press secretary Sean Spicer publicly apologized several times for this comment about Bashar Assad, the murderous dictator of Syria: "You had someone as despicable as Hitler who didn't even sink to using chemical weapons." Spicer got hammered for supposedly minimizing the horror of the Holocaust.

Democrats and liberal media routinely compare Republicans to Hitler and Nazis, and Republican policies to fascism. They've done so for decades. Here are just a few examples:

During the 1964 presidential race, Republican presidential candidate Barry Goldwater accepted an invitation to visit an American military installation located in Bavaria, Germany. On "CBS Evening News," hosted by Walter Cronkite, correspondent Daniel Schorr said: "It is now clear that Sen. Goldwater's interview with Der Spiegel, with its hard line appealing to right-wing elements in Germany, was only the start of a move to link up with his opposite numbers in Germany." When Goldwater accepted the Republican nomination, Democratic California Gov. Pat Brown said, "The stench of fascism is in the air."

After Republicans took control of the House in the mid-'90s, Rep. John Dingell, D-Mich., compared the newly conservative-controlled House to "the Duma and the Reichstag," referring to the legislature set up by Czar Nicholas II of Russia and the parliament of the German Weimar Republic that brought Hitler to power.

About President George W. Bush, billionaire Democratic contributor George Soros said, "(He displays the) supremacist ideology of Nazi Germany," and that his administration used rhetoric that echoes his childhood in occupied Hungary. "When I hear Bush say, 'You're either with us or against us,'" Soros said, "it reminds me of the Germans." He also said: "The (George W.) Bush administration and the Nazi and communist regimes all engaged in the politics of fear. ... Indeed, the Bush administration has been able to improve on the techniques used by the Nazi and Communist propaganda machines."

Former Vice President Al Gore claimed the Bush administration employed "digital" storm troopers, the paramilitary arm of Hitler's Nazi Party: "(George W. Bush's) executive branch has made it a practice to try and control and intimidate news organizations, from PBS to CBS to Newsweek. ... And every day, they unleash squadrons of digital brownshirts to harass and hector any journalist who is critical of the President."

NAACP Chairman Julian Bond played the Nazi card several times. Speaking at historically black Fayetteville State University in North Carolina in 2006, Bond said, "The Republican Party would have the American flag and the swastika flying side by side."

After the 2012 Republican National Convention, California Democratic Party Chairman John Burton said: "(Republicans) lie, and they don't care if people think they lie. As long as you lie, (Nazi propaganda minister) Joseph Goebbels -- the big lie -- you keep repeating it."

In 2012, then-Chairman of the South Carolina Democratic Party Dick Harpootlian compared the state's Republican governor to Hitler's mistress. When told that the Republicans were holding a competing press conference at a NASCAR Hall of Fame basement studio, Harpootlian told the South Carolina delegation, "(Gov. Nikki Haley) was down in the bunker, a la Eva Braun."

Following Donald Trump's election, Washington Post columnist David Ignatius invoked a comparison to the three-night murder spree in 1934 Germany carried out by the Nazi regime, saying about Trump's then-evolving transition team: "I think there is kind of a 'Night of the Long Knives' quality as this Trump team sorts out who is going to be on top, who is going to have the president-elect's ear."

Rep. Keith Ellison, D-Minn., the newly elected second-in-command at the Democratic National Committee, compared then-President George W. Bush and 9/11 to Adolf Hitler and the destruction of the Reichstag, the German parliament building: "9/11 is the juggernaut in American history and it allows ... it's almost like, you know, the Reichstag fire," Ellison said. "After the Reichstag was burned, they blamed the Communists for it, and it put the leader of that country (Hitler) in a position where he could basically have authority to do whatever he wanted."