Democrats: From Temper Tantrum to Self-Delusion

Larry Elder
|
Posted: Dec 08, 2016 12:01 AM
Share   Tweet
The opinions expressed by columnists are their own and do not necessarily represent the views of Townhall.com. 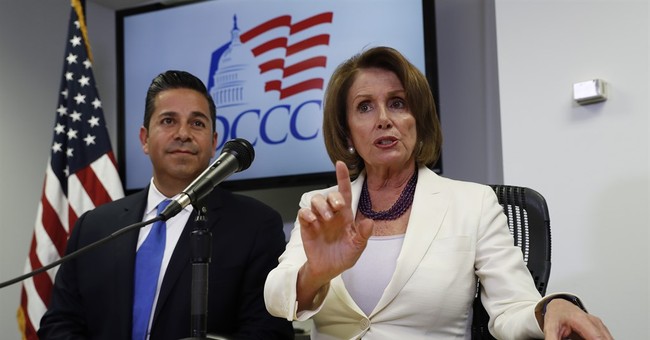 Trending
Hard to believe, but Hillary Clinton's campaign team thinks they lost because Donald Trump ignited America's inner bigot, which caused the KKK and Aryan Brotherhood members and sympathizers to show up in droves and vote Trump.

Following Mitt Romney's 2012 defeat, Democrats and pundits predicted GOP defeats as far as the eye could see, because there aren't enough white voters for Republicans to win. But now the narrative is, "Trump won by appealing to white voters." Could they please pick one and stick to it?

That's the takeaway from the Harvard quadrennial postmortem in which the two campaign camps participated. About Steve Bannon, Trump's campaign CEO, Clinton communications director Jennifer Palmieri said, "If providing a platform for white supremacists makes me a brilliant tactician, I am glad to have lost. ... I would rather lose than win the way you guys did."

To this Kellyanne Conway, Trump's campaign manager, angrily responded, "No, you wouldn't. That's very clear ... respectfully. No, you wouldn't. ... Jenn ... do you think I ran a campaign where white supremacists had a platform? Are you going to look me in the face and tell me that?"

"It did, Kellyanne. It did," countered Palmieri.

Fact: Based on exit polls, Trump got a (SET ITAL) lower (END ITAL) percentage of the white vote than Mitt Romney did in 2012, and a higher percentage of the black vote and the Hispanic vote than Romney. Initial post-election tabulations find that nationwide, Trump won 209 of the 676 counties that voted for Barack Obama twice -- in both 2008 and 2012. And he won another 194 of the 207 counties that Obama took only once -- in either 2008 or 2012. Did a raft of white supremacists move in and change the vote? Or did the voters' latent racism suddenly erupt in 2016?

Fact: When Barack Obama took office in 2009, he had, with the exception of John F. Kennedy, the highest approval ratings, 68 percent, of any elected president since Dwight D. Eisenhower in 1953. It certainly appears that Obama was black or biracial back in 2009, just as he was black or biracial when his poll numbers declined.

Fact: In a nation that the Clinton camp believes teems with white supremacists, Obama, in 2008, got a (SET ITAL) higher (END ITAL) percentage of the white vote than Democratic candidate John Kerry in 2004. But in 2016, whites came down with an acute case of what CNN's Van Jones called "whitelash," a reaction against, as he put it, "a changing country" and "a black president." Now it is true that Obama did not get a majority of the white vote. But the last presidential election in which Democrats won the white vote was in 1964. The majority of voting white Americans don't want a white Democrat or a black Democrat sitting in the Oval Office.

This assumption of vast American white supremacy mirrors the exceptions of many black politicians when, back in the '90s, the Supreme Court struck down and demanded redistricting of Southern congressional districts that had been specifically designed to increase black representation in the House of Representatives. Elaine Jones of the NAACP Legal Defense Fund said, "Once this decision goes through, you'll be able to hold the Black Congressional Caucus in the back of a taxicab." But contrary to the dreary predictions, every black Southern congressperson who decided to run for re-election -- despite having to try and retain a seat in a much more white congressional district -- won his or her race.

Early in the 2008 Democratic primary race, a black South Carolina state lawmaker, Robert Ford, refused to support Obama. He argued that a black presidential candidate would not only lose badly but would trigger such white racism that down-ballot Democrats would suffer: "It's a slim possibility for (Obama) to get the nomination, but then everybody else is doomed. ... Every Democrat running on that ticket next year would lose, because he's black and he's top of the ticket. We'd lose the House and the Senate and the governors and everything. ... I'm a gambling man. I love Obama. ... But I'm not going to kill myself."

Memo to the "racism, racism everywhere" crowd: Whites are as proud of slavery and Jim Crow as Germans and Austrians are of Adolf Hitler.

If Democrats truly believe that racism carried the day for Trump, they're even more out of touch than initially thought. Given that line of reasoning, they will be hard-pressed to get back the middle-class and working-class Americans they lost this cycle.

If Democrats think Trump won by "catering to racists," just wait until the economy improves under Trump, and more Latinos and blacks stop voting like victicrats. Just wait until blacks and Hispanics start voting to continue the policies that caused an improvement in their economic conditions and for education policies like Trump's pro-voucher stance.

Then Democrats will really start losing.