Hey, NFL, What About the Taxpayers' Concussion? 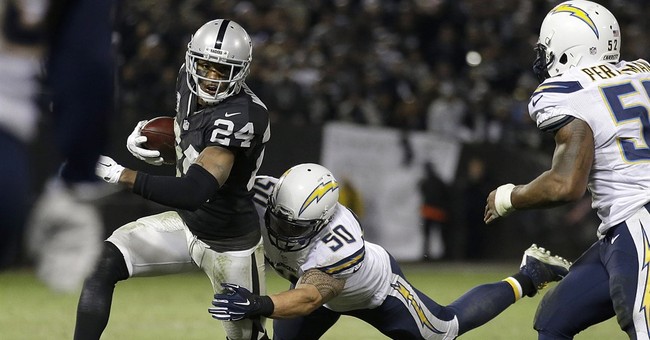 Three NFL teams claim they want to come to Los Angeles, the nation's second-biggest market. Their current home cities either did not agree to build a taxpayer-funded stadium or are dragging their feet in doing so.

Now each of the possibly L.A.-bound teams used to play in L.A., before they left for greener pastures -- aka more taxpayer money than L.A. offered. The two competing L.A. stadiums, where a team or two might or might not be playing,  supposedly are being built (or will be built) without tax dollars: one in L.A.-adjacent Inglewood, the other in nearby Carson.

The Oakland Raiders, who actually left their birth city of Oakland, played in L.A. for a few seasons and then returned to Oakland when those taxpayers ponied up. Raiders' owner Mark Davis says he prefers to stay in Oakland, even as he confabs with the San Diego Chargers (more about them later) on a deal to share a new stadium to be built in Carson. Davis says the Raiders have $500 million to put into a new Oakland stadium -- $300 million from the team and another $200 million from an NFL loan program -- but insists that Oakland needs to put in $400 million or so to get a $900 million stadium built.

The St. Louis Rams, who used to play in Los Angeles for decades before the "Show Me State" taxpayers and politicians lured them to Missouri with a new stadium and amenities for which they'll  still  be paying if and when the Rams move. Like the Raiders, St. Louis now demands a new stadium for them to stay. St. Louis recently offered to pony up $150 million for a new stadium. That offer requires the NFL to put $300 million into the pot -- and the NFL will only commit to $200 million.

The San Diego Chargers used to play in L.A. when the team began as the Los Angeles Chargers in the old American Football League that eventually merged with the NFL. To remain in San Diego, the Chargers also want a new stadium, but the city is mired down in environmental impact studies, challenges for funding and finagling tax revenues. The team already nixed an offer by the city for a downtown location, in part because the hotel industry didn't "offer" the Chargers anything to support that deal.

Why taxpayers give the already massively rich owners their tax money -- only to be jilted if they don't do it again in 20 or 30 years -- is worthy of a taxpayer-funded study. They shower tax subsidies and other public concessions on multibillionaire owners who pay multimillionaire players, all of which the decidedly non-wealthy fans end up paying. Nearly every stadium -- via taxpayer money -- gives owners grants, tax forgiveness, tax abatements, parking and refreshment concessions, sweetheart deals, free or below-market rent or some combination of all of the above.

Later, when owners demand that taxpayers pony up a spiffy new $600 million stadium with a retractable sunroof and luxury boxes, they truck down to city council and say, "Ante up, or I call the movers!" There's always another Suckersville, with an ego-driven but economically illiterate mayor willing to open the vault and yell, "Come on down!"

Politicians tell their constituents that taxpayer-financed stadiums and arenas generate jobs and attract revenue. But Charles C. Euchner, author of "Playing the Field," a book about cities' bidding wars for sports teams, points out, "Money spent on stadiums is money not available for other infrastructure projects, and most U.S. cities are in a state of crisis regarding the condition of roads, water and sewer mains, bridges and tunnels and subways."

Tax subsidies and tax breaks guarantee profits for team owners. And if, despite this generous cushion, owners go bust (or say they do), cities line up to enrich them at taxpayer expense, only to get stiffed when another town blows them kisses.

When other businesses face revenues that are "not sufficient to the economics," they downsize, cut costs or shut down money-losing operations. But when it comes to sports franchises, let's call this what it is -- massive, inexcusable corporate welfare, a shakedown that massively rips off taxpayers.

The movie "Concussion" depicts an NFL supposedly concealing evidence of the long-term brain damage from the head trauma experienced by players. Where's the film on the pocketbook trauma experienced by the taxpayers misled about the alleged, but non-existent, financial benefits of taxpayer-built stadiums? To the owners, it's a business. To the players, it's a job. It's only to the fans that it's a loyalty-driven passion.

So, fans, bend over and cough.