Ben Carson's Resume is Fair Game -- But What of Democrats' Resumes? 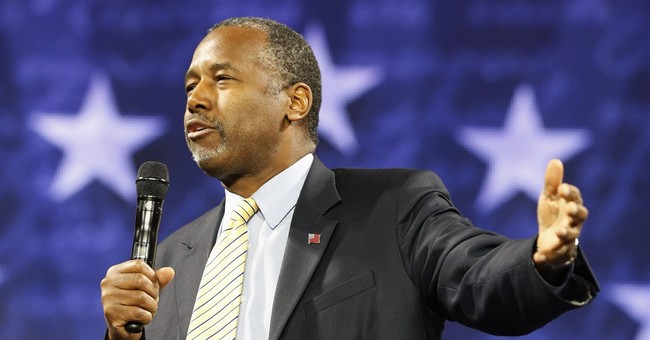 The Politico headline was blunt: "Ben Carson Admits Fabricating West Point Scholarship." Except Carson made no such admission. He acknowledged never applying to West Point. But as a top ROTC student in Detroit, there's little question that had he wanted to go to West Point, he could've gotten in.

Technically, West Point offers appointments, and the full tuition is paid for by taxpayers. But even West Point's own website uses the word "scholarship." In any case, Carson went to Yale, and, as such, could likely have gone to any school in the country.

Whether Carson fabricated parts of his bio is, of course, legitimate grounds for media inquiry. But is there any question that Democrats get less media scrutiny than do Republicans? But for Fox News, would the mainstream media have ever been interested in then-Sen. Barack Obama's relationship with his pastor the Rev. Jeremiah Wright, and Wright's anti-American and anti-Semitic statements?

Unfortunately, politicians, like many job applicants, sometimes enhance their personal stories. Rarely are these discrepancies deal-breakers. Consider some on the Democratic side:

Obama claimed, over and over, that his mom, dying of cancer in a hospital in Hawaii, had to fight with her insurance company to pay her medical and hospital bills. Not true. Ex-New York Times reporter Janny Scott wrote a flattering biography of Obama's mom. The book, however, contained this little bombshell: The sole dispute was over a disability policy issued by his mother's employer. The hospital sent her (SET ITAL) medical (END ITAL) bills directly to her insurance company, which paid the medical bills promptly and without dispute.

Obama said Selma inspired his parents to have him: "This young man named Barack Obama ... came over to this country. And he met this woman. ... They looked at each other and they decided we know that, in the world as it has been, it might not be possible for us to get together and have a child. But something's stirring across the country because of what happened in Selma, Alabama, because some folks are willing to march across a bridge. And so they got together and Barack Obama Jr. was born. So don't tell me I don't have a claim on Selma, Alabama." Moving speech, but Obama Jr. was born in 1961, four years (SET ITAL) before (END ITAL) Selma's Bloody Sunday march.

Obama, during the 2008 campaign, said he and Mom were on food stamps. But this was not mentioned in his autobiography. And Hawaii doesn't keep records.

Vice President Joe Biden blatantly lied about his grades in 1987, when the then-Senator was a presidential candidate. Alan Lockwood, author of "Barack O'Liberal: The Education of President Obama," writes: "During his 1987 campaign for the Democratic presidential nomination, Biden falsely claimed that he had 'graduated with three degrees from college' (he had one degree), was 'the outstanding student in the political science department' (he was in the bottom 26 percent of his class), had gone to law school 'on a full academic scholarship' (he had no academic scholarship), and had graduated in the top half of his law school class (he was in the bottom 12 percent)."

Presidential candidate Biden also said he was descended from coal miners. But he wasn't -- his ancestors never worked in mines.

Hillary Clinton, after meeting Sir Edmund Hillary in Nepal in 1995, told reporters she was named after the famous climber, who was the first to summit Mount Everest. But he did it six years (SET ITAL) after (END ITAL) Hillary was born, and he was widely unknown before that achievement.

There remains a no-fly zone over Hillary and former President Bill Clinton regarding Juanita Broaddrick's allegations of rape and intimidation. But for Ben Caron's "lies" -- unleash the hounds!

One cannot attribute this to simple Republican whining. The Washington Post ombudsman, Deborah Howell, admitted her paper's 2008 Obama bias. Examining stories from June 4, 2008, when Obama became the presumptive nominee, until Aug. 15, 2008, the Post ran 142 political stories about Obama, compared with 96 about John McCain. As to front-page stories, Obama was 35 to McCain's 13. What about photographs? The Post ran, during this time, 143 pictures of Obama versus 100 of McCain. In the year leading up to the November election, the opinion pages also showed their bias. Howell wrote: "The op-ed page ran far more laudatory opinion pieces on Obama, 32, than on Sen. John McCain, 13. There were far more negative pieces about McCain, 58, than there were about Obama, 32, and Obama got the editorial board's endorsement."

The Washington Times' Kelly Riddell wrote a few days ago: "A mere 7 percent of journalists identify as Republicans, and when they do give money to political campaigns they usually donate to Democrats, lending evidence to Republican presidential candidates' claims that they are facing a hostile audience when they deal with the press."

Scrutiny of Ben Carson's record is, of course, fair game. Just show the same level of interest in the other side of the aisle. Is that too much to ask? Apparently so.