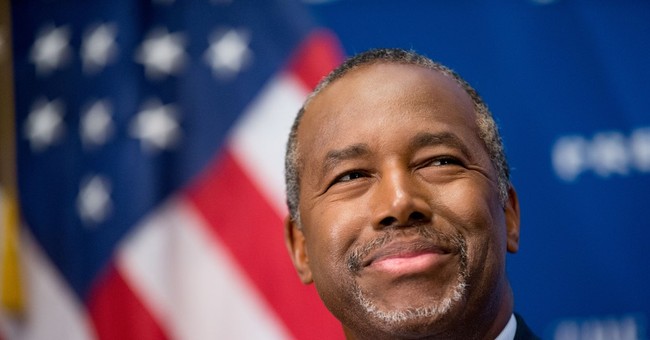 Trending
Dr. Ben Carson, now second in most polls for the Republican presidential nomination, naturally finds himself under attack by threatened lefties. GQ published an anti-Carson article with the headline "F--k Ben Carson," except it spelled out the f-word. Comic actor Seth Rogen tweeted "F--k you" to Carson. And a Daily Beast column accused him of anti-Semitism. The columnist cited Godwin's law, which states that debate gets shut down the minute one invokes Nazi Germany to make a point.

Let's deal with them in order.

First, GQ. What incensed the writer was Carson's assertion that he would not have cooperated with the recent Oregon Community College mass killer, and that he would have urged the other would-be victims to rush the shooter. "I would say, 'Hey, guys, everybody attack him. He may shoot me, but he can't get us all.'" said Carson. To the GQ columnist, Carson must be on performance-enhancing drugs: "You are now bearing witness to an arms race of stupid, because stupid is in such high demand from the GOP base at the present moment. Stupid is what gets you attention, and attention is what gets you better polling numbers."

Was Carson outlandish? Didn't President Obama play host at the White House to three Americans who did just what Carson said -- rushed in and subdued a terrorist on a French train?

And isn't military veteran Chris Mintz rightfully being called a hero for taking seven shots as he blocked the Oregon killer from entering his classroom?

And didn't those passengers on United Flight 93 force a crash landing in a field outside Shanksville, Pennsylvania, rather than allow the terrorists to reach their ultimate destination -- most likely the White House or the U.S. Capitol building?

Second, let's discuss the Canadian import, Seth Rogen. What prompted his profane tweet? Carson said, "The likelihood of Hitler being able to accomplish his goals would have been greatly diminished if the people had been armed." This prompted Rogen's "F--k you, Ben Carson" tweet -- no further elaboration offered. The Anti-Defamation League says that guns would have been of little use.

But Independent Institute's senior research fellow Stephen P. Halbrook, author of "Gun Control in the Third Reich," sides with Carson: "Why did they disarm these people -- that would be the political enemies of the Third Reich, and that would be the Jewish people -- before they did violence on them? There's only one reason. I'm not saying that Nazi Germany would not have been in tyranny, or that the Holocaust would not have happened, but certainly had people had a better means of resistance, the situation might not have been as bad as it was."

Halbrook points to a number of gun control and disarmament actions in Germany that took place just before and during Hitler's rise to power. "And then in 1938," says Halbrook, "in the weeks before Kristallnacht -- the Night of the Broken Glass -- why did the Nazis order a general disarmament of all of the Jews in Germany? There's only one reason -- they could attack them. Some have said that the Kristallnacht was the day the Holocaust began. And that was the day that there were massive, massive attacks throughout all of Germany -- burning synagogues, breaking into Jewish houses, vandalizing their businesses. So gun control facilitated the Holocaust. It didn't cause it -- there were a variety of factors that made it possible."

Third, this brings us to Godwin's Law. Mike Godwin, a law professor, noted that in online discussions -- if they continue long enough -- someone is going to make a Nazi comparison. The term has come to mean that when one uses Nazi comparisons or analogies, he seeks to shut down the conversation, stifling debate.

Does this indignation apply to the left?

Democratic mega-donor George Soros once said the George W. Bush White House displayed the "supremacist ideology of Nazi Germany" and that Bush's administration used rhetoric that echoed his childhood in occupied Hungary. "When I hear Bush say, 'You're either with us or against us,'" Soros said, "it reminds me of the Germans."

Former Vice President Al Gore said, "(President George W. Bush's) executive branch has made it a practice to try and control and intimidate news organizations, from PBS to CBS to Newsweek. ... And every day, they unleash squadrons of digital brownshirts to harass and hector any journalist who is critical of the President."

NAACP chairman Julian Bond, in 2004, criticized those controlling the White House and Congress: "(Republicans) preach racial equality but practice racial division. ... Their idea of equal rights is the American flag and Confederate swastika flying side by side." He later said, "The Republican Party would have the American flag and the swastika flying side by side."

Why the hyperventilation over Ben Carson?

He represents a clear and present danger to the left. He counters Dems' narrative that racism remains a major hindrance to black progress. If 20-25 percent of blacks start voting Republican, the Democratic Party is toast. And they know it.