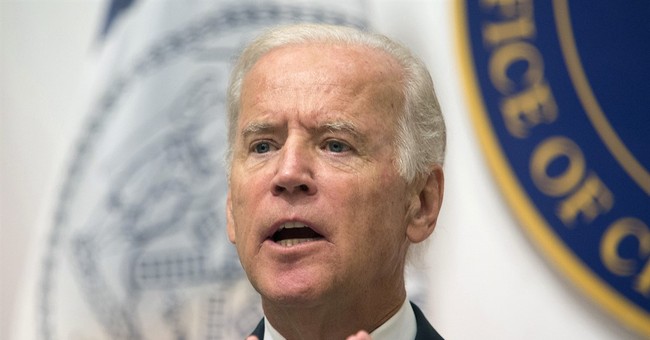 Is Vice President Joe Biden in or out?

Many praised Biden's "honesty" for saying to Stephen Colbert on CBS' "The Late Show": "I don't think any man or woman should run for president unless, number one, they know exactly why they would want to be president, and two, they can look at folks out there and say, 'I promise you, you have my whole heart, my whole soul, my energy and my passion to do this.' And I'd be lying if I said that I knew I was there. I'm being completely honest. Nobody has a right, in my view, to seek that office unless they're willing to give it 110 percent of who they are."

Actually, a completely honest answer would have been, "I'm watching the polls to make sure Hillary Clinton is completely dead, and I'm secretly meeting with donors to insure I'll be the recipient of their money when she implodes."

Biden may think the main issue is whether Hillary Rodham Clinton has sunk far down enough for him safely to jump in. But his problem is more fundamental. A Biden candidacy represents a third term for Obama. For what reason, on what grounds, should Americans give the policies of the Obama administration four more years?

The latest poll of likely voters from Rasmussen Reports found 64 percent think the country is on the "wrong track" and only 29 percent believe it's headed in the "right direction."

As to the economy -- the top reason most voters cast their vote -- a majority considers America on the "wrong track," reports The Atlantic in its new poll on the "American Dream" conducted with the Aspen Institute. Pollsters found that 75 percent of the general population believe "the American Dream is suffering," and 69 percent thought "obstacles to realizing the American Dream are more severe today than ever." Among the top economic obstacles cited were "personal debt," "lack of economic opportunity" and "cost of healthcare" -- a problem Obamacare was supposed to have solved. Also blamed as top obstacles to achieving the dream were "big government," "high government spending," "Obamacare," "excessive government regulations" and "lack of government policies to support economic growth." The biggest problems in America today, said poll respondents, are "healthcare costs" (cited by 29 percent), followed by "national debt" (23 percent), "too much government spending" (22 percent), "unemployment" (20 percent), "illegal immigration" (20 percent) and that "taxes are too high" (18 percent).

According to the Bank of America's annual Small Business Report, as we enter the sixth year of this recovery, only 21 percent of small businesses say they've "fully recovered." According to Karen R. Harned, executive director on the National Federation of Independent Business Small Business Legal Center, small businesses cite, as the primary reasons, lack of sales, taxes and regulations.

"Always entrepreneurial, with a keen focus on the bottom line, the American small business owner looks for ways to minimize the time and money spent on things other than running his or her business. Since many of these regulations wisely exempt the smallest of small businesses, some employers purposefully do not increase hiring because they do not want to have to comply with the regulatory regimes that await businesses that expand to 10, 15, and 50 or more employees."

This presents a dilemma for Biden, as it does for any sitting vice president in an administration with a lousy economy. He must break with Obama, slam the economy and risk being perceived as disloyal. Or he can ignore the polls and insult the voters by claiming things are great.

Biden, during a speech on the U.S. economy to kick-off a Labor Day march in Pittsburgh organized by the AFL-CIO, did say, "It used to be when productivity went up in America, everybody got to share. The people who caused the productivity increase, they got to share. They got a piece of the action. Something is wrong, folks." But that's as far as he went. He didn't say what was wrong, let alone blame taxes or regulations or offer any policy to address what's "wrong."

This raises Biden's second dilemma. How is this tax-spend-and-regulate Democrat going to differentiate himself from an administration that has taxed, spent and regulated its way to the very "recovery" that Americans describe as on the "wrong track"? Please tell us, Joe.