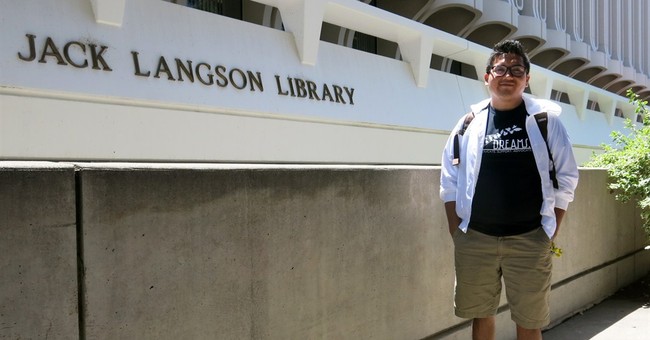 The Los Angeles Times headline was cheerful: "It's Official: Latinos Now Outnumber Whites in California." The Times said, "As of July 1, 2014, about 14.99 million Latinos live in California, edging out the 14.92 million whites in the state."

Is this good news or bad news?

The L.A. Times seems to think the former. The article cites the chief demographer for the state finance department who asserts, "A young Latino workforce helps the economy by backfilling retiring baby boomers." Really?

Education professors Patricia Gandara of UCLA and Frances Contreras of University of Washington wrote the 2009 book "The Latino Education Crisis: The Consequences of Failed Social Policies." Heather Mac Donald, a contributing editor of City Journal, reviewed the book. She wrote: "Hispanics are underachieving academically at an alarming rate, the authors report. Though second- and third-generation Hispanics make some progress over their first-generation parents, that progress starts from an extremely low base and stalls out at high school completion. High school drop-out rates -- around 50 percent -- remain steady across generations. Latinos' grades and test scores are at the bottom of the bell curve. The very low share of college degrees earned by Latinos has not changed for more than two decades. Currently only one in 10 Latinos has a college degree."

Before the book came out, co-author Gandara wrote an article for the National Education Association, where she said: "The most urgent problem for the American education system has a Latino face. Latinos are the largest and most rapidly growing ethnic minority in the country, but, academically, they are lagging dangerously far behind their non-Hispanic peers. For example, upon entering kindergarten 42 percent of Latino children are found in the lowest quartile of performance on reading readiness compared to just 18 percent of white children. By fourth grade, 16 percent of Latino students are proficient in reading according to the 2005 NAEP, compared to 41 percent of white students. A similar pattern is notable at the eighth grade, where only 15 percent of Latinos are proficient in reading compared to 39 percent of whites.

"With respect to college completion, only 11 percent of Latinos 25 to 29 years of age had a BA or higher compared to 34 percent of whites. Perhaps most distressing, however, is the fact that no progress has been made in the percentage of Latinos gaining college degrees over a 20-year period, while other groups have seen significant increases in degree completion."

The New York Times, in 2006, wrote an editorial called "Young Latinas and a Cry for Help": "About one-quarter of Latina teens drop out, a figure surpassed only by Hispanic young men, one-third of whom do not complete high school. Latinas, especially those in recently arrived families, often live in poverty and without health insurance.

"Another piece of the puzzle is how to address the complication of very early, usually unmarried motherhood. Religious beliefs in Hispanic families often limit sex education and rule out abortion. Federal statistics show that about 24 percent of Latinas are mothers by the age of 20 -- three times the rate of non-Hispanic white teens. ... One in four women in the United States will be Hispanic by the middle of the century. The time to help is now."

Dr. Anna Sanchez performs deliveries at a hospital in Orange, California, where the mothers are often Hispanic teenagers. She says: "(The) teens' parents view having babies outside of marriage as normal, too. A lot of the grandmothers are single as well; they never married, or they had successive partners. So the mom sends the message to her daughter that it's OK to have children out of wedlock. ... The girls aren't marrying the guys, so they are married to the state."

Married to the state?

"The Latino Education Crisis" authors Gandara and Contreras fear a "permanent underclass." They write, "With no evidence of an imminent turnaround in the rate at which Latino students are either graduating from high school or obtaining college degrees, it appears that both a regional and national catastrophe are at hand."

City Journal's Mac Donald quotes Anita Berry, a case manager who works at Casa Teresa, a California program for homeless single mothers. Berry says: "There's nothing shameful about having multiple children that you can't care for, and to be pregnant again, because then you can blame the system. ... The problems are deeper and wider. Now you're getting the second generation of foster care and group home residents. The dysfunction is multigenerational."

Whether this can be turned around remains to be seen. But it certainly casts doubt on the Times' blissful assertion that "a young Latino workforce (will help) the economy."

Did You Catch What Biden Said About Our 'New Normal'?
Townhall
'Honey, do you even HISTORY?' Joy Reid SCHOOLED for pushing revisionist history claiming the parties MAGICALLY switched places
Twitchy
Biden's Slip of the Tongue About Kamala Harris at Bill Signing
Redstate
The Democrats' 'Joosie Smoolyay' Problem
PJ Media