If Minimum Wage Is So Great, Why Cite Bogus Study? 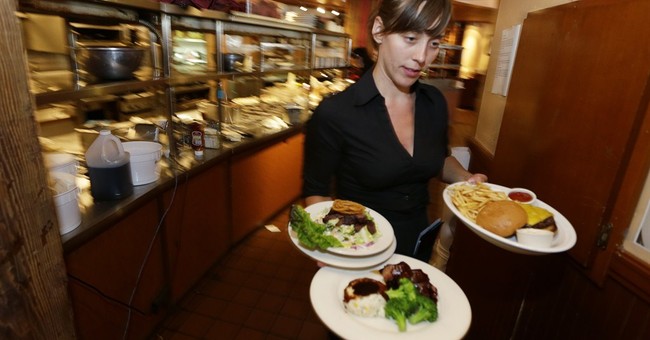 The head of a Los Angeles-based nonprofit "sustainable economy" association calls for a higher minimum wage. No surprise there. But he cites a major pro-minimum wage study that responsible academics long ago abandoned.

Daniel Flaming of the Economic Roundtable, in a recent Los Angeles Times op-ed, said: "The conclusion that wage fairness is not a zero-sum game was established by a landmark study comparing neighboring counties in New Jersey and Pennsylvania, after New Jersey increased the minimum wage but Pennsylvania did not. It found that after the wage hike, employment in the fast-food industry increased more in New Jersey counties than in neighboring Pennsylvania counties."

Well, actually, no. This now infamous study by David Card and Alan Krueger did not prove such an outlandish thing. Here's what happened.

New Jersey raised its minimum wage. Pennsylvania did not. What will happen to the fast-food industry in these adjacent states? Good test case, right? If New Jersey fast-food workers suffered, it proves what most economists believe -- that minimum wage harms workers, particularly unskilled men, women and minorities, the kind of folks the left claims they care about. If, on the other hand, New Jersey's new wage law had no effect -- or even helped -- so much for the "artificially increase the cost of labor and you decrease the demand for it" argument.

Surprisingly, researchers discovered that New Jersey fast-food restaurants saw an (SET ITAL) increase (END ITAL) in employment relative to Pennsylvania. The study flew around the liberal world faster than a Sarah Palin joke. President Bill Clinton cited it. But a funny thing happened when the study was peer reviewed.

Researchers seeking to replicate the results obtained actual payroll records -- rather than simply phoning and asking hiring personnel whether they hired people during the period studied. Turns out, payroll records did not corroborate the verbal assertions made by employers. New Jersey actually suffered a (SET ITAL) decline (END ITAL) in employment relative to Pennsylvania -- just as traditional economic theory would have anticipated.

So why is this bogus study still cited? I put that question to Ohio University economist Lowell Gallaway, who has written critically about the study. Gallaway said: "The Card-Krueger study is still cited because it is useful politically. ... It still has legs because the minimum-wage notion is an idea that just will not die. You cannot put it to rest by any amount of evidence demonstrating its problems. Whenever people want to believe something strongly enough, any study that supports that belief -- no matter how bad it is -- will be accepted."

Vice President Joe Biden recently met with Los Angeles Mayor Eric Garcetti to support the mayor's plan to raise the minimum wage in Los Angeles to $13.25 an hour. Days before that, the L.A. City Council approved another Garcetti plan to increase minimum wage for workers in large hotels to $15.37 per hour. Now back in 2008, the L.A. City Council passed a "living wage ordinance" for hotel workers in the L.A. airport area.

As with the minimum wage study of New Jersey and Pennsylvania, this, too, presented us with a real-world test case. What happened?

Beacon Economics, chosen by both management and labor to give an objective, nonpartisan report on the effect of a $15.37 hourly minimum wage, concluded that the effect of this 2008 wage hike was devastating. Beacon's founding partner, economist Christopher Thornberg, said: "The data clearly show that hotels around the airport have seen a sharp decline in employment relative to hotels in Los Angeles County overall. Some 12 percent more people are employed at hotels in the county than in 2007. ... But in the airport hotels covered by the law, hotel employment has declined 10 percent."

Even the editorial board of the Los Angeles Times, a supporter of the minimum wage, warned of the negative impact if surrounding cities failed to follow suit: "It's important that Los Angeles not go it alone. ... This is important to keep the city from becoming an island of high wages and to keep businesses from fleeing to cheaper locations outside L.A.'s borders." In other words, if Los Angeles acts stupidly, we hope and expect everybody else to do so as well.

More? How about the respected and widely cited leftwing think tank, the Brookings Institution? Brookings economist Gary Burtless, who specializes in labor, also says a $15-an-hour wage goes too far. While supportive of Obama's call for a $10.10 minimum wage, Burtless objected to Seattle's newly enacted $15 minimum wage: "Consider a business that mainly sells low-cost, fast-food meals. If it must pay $15 an hour to its low-wage employees, while its competitors less than a mile away are only required to pay $10 an hour, the companies outside Seattle can charge lower prices to their customers for shakes, burgers and fries, and yet still make a profit." Well, duh.

Why the madness despite its clear job-killing stupidity? L.A. City Councilman Mitch O'Farrell, a Democrat who represents the Hollywood area, said he understood the anti-minimum-wage Beacon report. But, said O'Farrell, "At the end of the day, between the intellect and the heart, the heart wins out."

Larry Elder is a best-selling author and radio talk-show host. To find out more about Larry Elder, or become an "Elderado," visit www.LarryElder.com. Follow Larry on Twitter @larryelder. To read features by other Creators Syndicate writers and cartoonists, visit the Creators Syndicate Web page at www.creators.com.