Unrest in Iran: The Vindication of George W. Bush 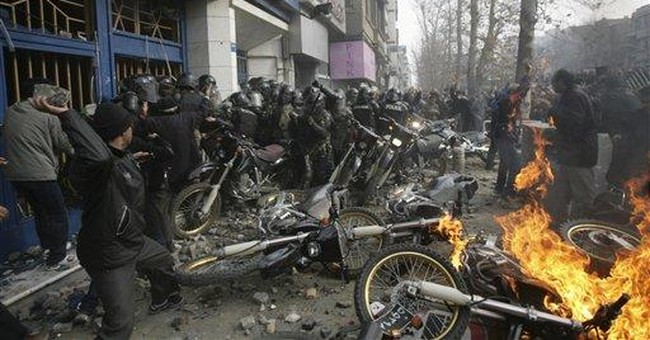 Did Saddam Hussein's fall and the formation of a fledging democracy in Iraq encourage and embolden regime-threatening dissent in Iran?

The anti-Iraq War crowd, many of whom suffer from Give-George-W.-Bush-No Credit-for-Anything Disease, says, "No, of course not." How dare anyone even suggest that the former President was correct, if not about the rightfulness of the war itself, then about his argument that a "free and peaceful" Iraq would provide a "dramatic and inspiring example" to the Middle East and the Muslim world. Good Lord!

The Iraq War-achieved-zero crowd begrudged Bush nothing even after the democratic Cedar Revolution in Lebanon. Never mind that Walid Jumblatt, a Lebanese Druze Muslim leader, said: "It's strange for me to say it, but this process of change has started because of the American invasion of Iraq. I was cynical about Iraq. But when I saw the Iraqi people voting (in 2005), 8 million of them, it was the start of a new Arab world."

As to Iran, The New York Times quoted a pundit-blogger who, when protests began this past summer, wrote, "(N)o Iranian ... has mentioned Iraq as an inspiration for the demonstrations, nor has any leader of their opposition cited their Iraqi neighbors as a model or a source of guidance."

Meet Mohsen Kadivar. In May 2004, Time magazine profiled this Iranian intellectual in a flattering article called "The Critical Cleric -- Reclaiming Islam for a New World." Newsweek called him a global leader "to watch in 2005." His criticism of the Iranian regime landed him in jail. He now teaches at Duke University, and PBS's Charlie Rose interviewed him in July.

What does this cleric says about Iraq's possible influence on his native country? In February 2005, he said: "I think the Iraqis can make what we wanted to create but were unsuccessful: a real Islamic Republic. By that I mean a republic with Islamic values, democracy with Islamic values ... (where) the clergy has no special rights. If they have a good government with Islamic democracy and without any special or divine rights for the clergy, the Iranian government won't be able to justify its situation to the Iranian citizens."

Meet Mashallah Shamsolvaezin. In 2000, this Iranian journalist received an International Press Freedom Award but could not attend the formal dinner honoring him. Shamsolvaezin was then sitting in a Tehran prison for the crime of "insulting Islamic values." The authorities shut down several publications that he edited. Just days ago, he and several other journalists were arrested in Iran.

What did he say about Iraq's possible influence on Iran? "The Shi'as in Iraq have accepted the notion of having a secular government, and they are slowly moving toward the democratization of their country -- free elections, democratic institutions, a free press. All of this in and of itself will have an impact on the situation in Iran."

Meet Mohsen Sazegara. This Revolutionary Guard co-founder and former Islamic Republic supporter became a critic. He attempted to run for president of Iran, but authorities denied his application. He spent three months in jail for opposing the regime. He now lives in the United States and faces more prison time should he return to his country.

What did he say about Iraq's possible influence on Iran? "I personally hope that Iraq's (transition to democracy) will be completed successfully so that it can also help our nation. For sure, neighbors with democratic governments are much better for us than dictators such as Saddam Hussein or backward groups such as the Taliban ... . Our young generation in particular has shown ... that it has a strong desire for democracy, human rights and civil society, and a strong desire to join the international (community). And when democratic changes take place in our neighboring and brother country Iraq, with its many ties to us, it encourages our youth, and emboldens our young people to ask for change in our current constitution."

In truth, the anti-Iraq War/Bush-hating left despises the former President far more than do the Iranians.

Almost two years after we entered Iraq, Iranians, according to a 2004 BBC poll, preferred Bush (52 percent) over John Kerry (42 percent) in the U.S. presidential elections. When asked whether the U.S. should get out of the Middle East, only 20 percent of Iranians said yes.

In May 2004, New York Times columnist Nicholas D. Kristof traveled to Iran. He wrote: "Everywhere I've gone in Iran ... people have been exceptionally friendly and fulsome in their praise for the United States, and often for President Bush as well. ... Indeed, many Iranians seem convinced that the U.S. military ventures in Afghanistan and Iraq are going great, and they say this with more conviction than your average White House spokesman."

The Iraq War and fledging democracy continue to pay dividends. It helped convince Libya's strongman to surrender his WMD. It helped inspire a democratic movement in Lebanon. And it may, just may, help to bring down an Islamofascist government that is the leading exporter of terrorism -- before it gets a nuclear bomb.

Just as the "neo-cons" had hoped.