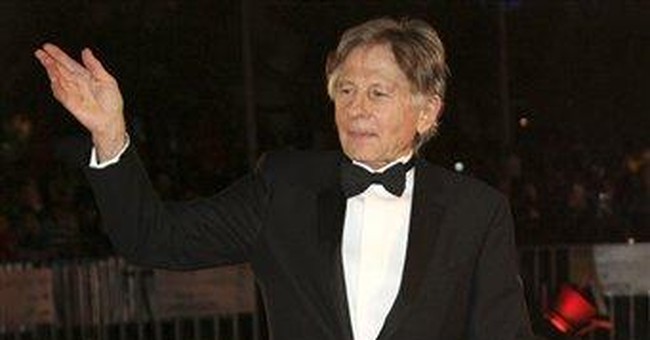 Hollywood and the traditional media seem determined to flaunt their cluelessness.

Director Roman Polanski pleaded guilty, in 1977, to one count of unlawful sex with a minor -- a girl 13 years old. Normal people call this rape. After a photography session with the girl, the 43-year-old Polanski gave her drugs and alcohol. The victim told a grand jury she repeatedly told him to "keep away," but Polanski forced her to have sex -- orally, anally and vaginally.

Authorities charged Polanski with six felony counts -- furnishing a controlled substance to a minor, committing a lewd or lascivious act on a child, unlawful sexual intercourse, rape by use of drugs, perversion and sodomy -- charges that, if resulting in conviction, meant possible prison time of 50 years.

To spare the girl the ordeal of a trial, the prosecution accepted a plea deal and reduced six counts to one, and Polanski agreed to spend 90 days in prison for psychiatric evaluation. Prison officials released Polanski after only 42 days and recommended no additional prison time. Both the defense and prosecution expected the judge to agree.

The judge called the prison report "a whitewash" and, according to some, planned to sentence Polanski to the remaining 48 days -- if the director agreed to a voluntary deportation upon release. Others say the judge planned to impose a long prison term, allegedly ticked off after being shown a photograph of the waiting-to-be-sentenced Polanski in Germany celebrating Oktoberfest with young women. When Polanski returned to the States, he heard rumors that the judge might send him to prison, possibly for a long time.

So Polanski fled the country. He caught a plane to Europe, never to return for 32 years and counting.

He continued making films, one of which, "The Pianist," won an Oscar for Best Director. Two weeks ago, however, Swiss authorities arrested Polanski for fleeing the United States. The Los Angeles County district attorney's office seeks his extradition to America.

Bigwig film producer Harvey Weinstein calls Polanski's unlawful sex a "so-called crime" and claims that "Hollywood has the best moral compass." Harrison Ford, Debra Winger, Martin Scorsese, Woody Allen and many others want Polanski set free. They argue that the publicity-seeking but now-dead judge reneged on his promise of leniency; cash-poor California has higher priorities than to spend taxpayer money on a 30-year-old case; Polanski has "suffered long enough"; his then-wife was murdered by Charlie Manson followers; he lost family in the Holocaust and is himself a Holocaust survivor; the rape victim/survivor, now 45 years old, wants the matter dropped; Polanski makes great films; and, in the immortal words of actress/pundit Whoopi Goldberg, this wasn't "rape-rape."

This brings us to David Letterman.

The late-night host admitted, during a taping of his show, that he has "had sex with women who work on this show." A CBS producer on another show, "48 Hours Mystery," allegedly demanded that Letterman pay him $2 million or face public exposure.

Letterman told the audience that yes, he did have sex with women on his staff. Some laughed, apparently waiting for a punch line. When Letterman said that authorities had arrested the alleged would-be extortionist -- and it became clear that this was no joke -- the audience applauded.

Now, office affairs take place all the time. And no one even intimated that the women were anything other than willing participants. But Letterman is the boss and the producer of his own show.

Did Letterman's female staffers, past or present, feel slighted -- lower salary, loss of promotion, bad assignments -- because of real or perceived favoritism given to those women with whom Letterman was having sex? Who knows? When "reporters" have described the "bombshell" news of the attempted extortion, none -- at least that I've seen -- has raised this obvious question.

Maybe there's nothing there. But what of the failure to even raise this issue? Forget "Letterman." Pencil in "Limbaugh" or "Hannity" or "Beck" and see what happens.

The blatantly liberal Letterman makes no secret of his disdain for former President George W. Bush and for the war in Iraq. Does this cause the supposedly "pro-woman" left to turn into a pretzel because someone they like finds himself in the cross hairs?

For example, Kathleen Willey accused then-President Bill Clinton of taking her hand and placing it on his genitals. Feminist Gloria Steinem actually wrote that assuming the allegation true, this was (SET ITAL) not (END ITAL) harassment or assault! "President Clinton," Steinem said, "took 'no' for an answer."

When ABC's Diane Sawyer interviewed special prosecutor Ken Starr, she actually asked him whether (SET ITAL) he (END ITAL) had ever cheated on his wife -- as if Congress impeached Clinton for cheating. "That's irrelevant and none of your business," Starr should have said. "The appropriate question is whether I've ever committed perjury or obstruction of justice. And the answer is no."

But take comfort. The liberal elite "has the best moral compass."