The Other 'Hispanic' Nominee 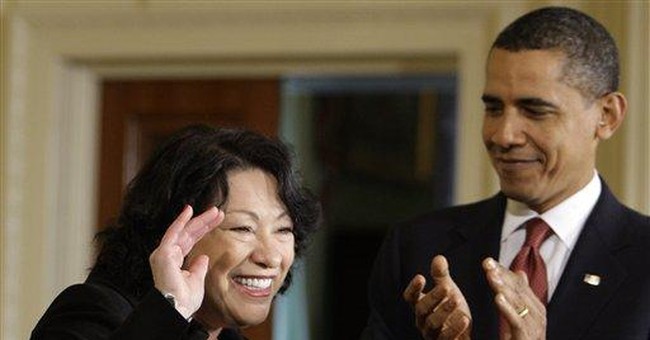 "For the first time in a long time," said one "Hispanic" man in the street interviewed on cable television, "I feel really proud." Others in the "Hispanic community" rejoiced as Sonia Sotomayor became the first Hispanic justice on the Supreme Court.

Sen. Dianne Feinstein, D-Calif., in her statement at the beginning of Sotomayor's confirmation hearings, said: "Your nomination I view with a great sense of personal pride. You are indeed a very special woman. You have overcome adversity and disadvantages (emphasis added)." Senate Majority Whip Dick Durbin, D-Ill., said, "Judge Sotomayor, you have overcome many obstacles (emphasis added) in your life that have given you an understanding of the daily realities and struggles faced by everyday people."

Let's talk about the obstacles, adversity and disadvantages of another Hispanic nominee, one whom many thought -- pre-Sotomayor -- worthy of future consideration as the first Hispanic Supreme Court justice.

The nominee served as a clerk at the U.S. Court of Appeals and the Supreme Court, practiced law in New York, and then served as an assistant U.S. attorney, later joining the Justice Department as an assistant to the solicitor general for the Clinton administration.

Overcoming personal adversity? The nominee's spouse died from an accidental overdose of alcohol and sleeping pills, after the couple had suffered through a miscarriage.

The American Bar Association -- whose evaluation was once hailed as "the gold standard by which judicial candidates are judged," by Senate Judiciary Committee member (and current chairman) Patrick Leahy, D-Vt. -- unanimously gave the nominee its top "well-qualified" rating. Yet the nominee -- despite an admirable record of overcoming personal and professional "obstacles" and "adversity" -- met with a hailstorm of opposition, including a filibuster to prevent an up-or-down vote on the Senate floor.

The Senate only had 55 votes to end the filibuster, but it requires 60 votes to end one. If the Democrats had allowed a full vote, the nominee would have had enough Senate votes to reach confirmation. After all, Clarence Thomas only got 52 votes for his confirmation. Finally, because of fierce opposition by Democratic senators -- including the lengthy, seven-month filibuster staged as a procedure-delaying tactic to deny a full Senate confirmation vote -- the nominee withdrew in 2003. "This should serve as a wake-up call to the White House that it cannot simply expect the Senate to rubber-stamp judicial nominees," said Sen. Edward Kennedy, D-Mass.

The nominee was Miguel Estrada.

Then-President George W. Bush, in 2001, nominated him to the prestigious U.S. Court of Appeals for the District of Columbia Circuit. Had Estrada secured the nomination -- and had Republicans retained the White House in 2008 -- many would have placed Estrada on the list of possible future Supreme Court justices. He, not Sotomayor, could have become that court's first Hispanic justice. Instead, the "minority-sensitive" Democrats treated him like a child molester. One staff strategy memo sent to Sen. Durbin in 2001 -- when the Democrats ran the Senate Judiciary Committee -- called Estrada "especially dangerous, because he has a minimal paper trail, (SET ITAL) he is Latino (END ITAL) (emphasis added), and the White House seems to be grooming him for a Supreme Court appointment."

Sen. Chuck Schumer, D-N.Y., days before chairing a Senate Judiciary Committee's confirmation hearing on Miguel Estrada, told the liberal magazine The Nation: "(Estrada) is like a Stealth missile -- with a nose cone -- (SET ITAL) coming out of the right wing's deepest silo (END ITAL) (emphasis added)." When, however, President Barack Obama nominated Sonia Sotomayor, Schumer regained his "compassion" for minorities: "(Republicans) oppose her at their peril."

Opposition to someone's nomination on ideological grounds or "judicial philosophy" is fair game -- irrespective of the nominee's race, ethnicity or gender. But Democrats consider sob stories of Democratic nominees relevant to show "obstacles" overcome and "adversity" conquered. But as to the sympathetic "back story" of a Republican nominee -- who cares? It means little or nothing -- even in the case of a racial or ethnic "first" -- if nominated by the wrong party.

Democrats market themselves as the party of compassion and sensitivity to racial and ethnic minorities. But they do so only selectively. A Republican nominee like Miguel Estrada becomes a "sellout" or a "Tio Taco." Similarly, Justice Clarence Thomas, following his nomination by then-President George Herbert Walker Bush, found himself caricatured on the cover of a national black magazine as a mammy-style, handkerchief-capped "Uncle Thomas."

"Hispanic pride" and "overcoming obstacles" only count when the "good guys" say so.