Who Drove the Chevy Off the Levy? 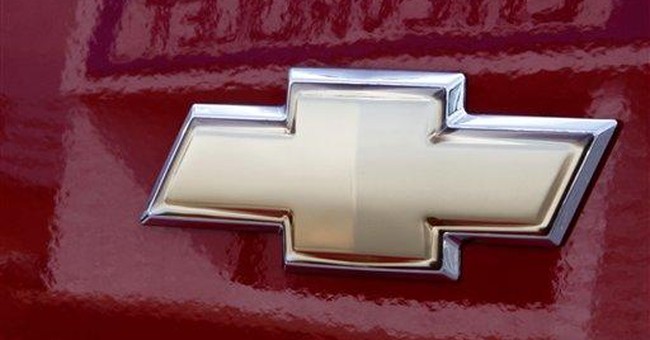 How on earth did this happen?

General Motors, the 100-year-old car company that once employed more than 500,000 workers and had a 50 percent market share, just crumbled into bankruptcy. The government now runs it.

In the mid-'70s, I attended law school in Michigan. Even back then, foreign automakers -- especially the Japanese -- steadily shaved off market share from the once-mighty Big Three: GM, Chrysler and Ford.

This foreign encroachment into the auto industry scared the socks off executives of domestic appliance-makers. Manufacturers of dishwashers, refrigerators and stoves scrambled into all-hands-on-deck mode. They vowed to make better stuff, with continually improved features and zero tolerance for defects. Westinghouse -- a major manufacturer in serious trouble during the early '70s -- set up a "productivity and quality center" to study Japanese manufacturing methods. A 1983 Business Week article quoted one Westinghouse top exec: "We have sent more study teams to Japan than any other American company. We are doing to the Japanese what they have done to us for 20 or 30 years." Today domestic manufacturers of large appliances still dominate the American market.

But while the appliance-makers manufactured better products, the automotive Big Three manufactured excuses: "The Japanese pay their workers less"; "the Japanese benefit from their weak yen"; "OK, the Japanese excel at making tiny cars, but they can't compete with us on larger models and trucks"; etc.

The Big Three then turned to Washington. Their lobbying paid off through protectionist policies: "voluntary" import quotas (forcing American consumers to pay more for Japanese cars); domestic content rules (requiring foreign automakers to use a certain amount of American-produced equipment in their cars); and demands that foreigners "open" their markets to American car products or stand accused of "unfair trade."

All of this shielded the Big Three from the rule of business that determines success or failure: Improve or die.

My uncle Thurman worked at a Cleveland GM plant for 30 years before retiring. He operated machines that, from time to time, broke down. Mechanically skilled, though he lacked formal training, Thurman repaired cars in his garage after work and on weekends for friends, neighbors and referrals. But when his plant machine broke down, union rules required him to sit on his hands -- sometimes for hours -- while he waited for a young, often 20-something "tech" in a white shirt and tie to fix the machine. "Never," Uncle Thurman once told me, "did the kid ask me anything -- even though I could put together and take apart the machine in my sleep."

Chrysler, 30 years ago, teetered on the brink of bankruptcy. If it had been allowed to collapse, the remaining Big Two would likely have purchased much of Chrysler's plants and equipment and hired at least some of its workers. Instead, Congress provided financial aid to "rescue" the company. By not letting Chrysler fail, two major things occurred. First, a feeble company remained alive, only to limp from financial crisis to financial crisis for the next several decades. Second, it sent a message not only to Detroit but also to the rest of America: Expect a taxpayer bailout if the government deems a business "too big to fail."

After World War II, manufacturers in Japan sought out the advice of W. Edwards Deming, an American quality-control expert. American businesses ignored Deming's theories on continual improvement, but Japanese companies lingered on his every word.

The Los Angeles Times named Deming one of the 50 people who most influenced business during the 20th century. "Scholars note that Japan was also receptive to Deming at a time when America was not," wrote the Times, "in part because Deming's ideas dovetailed with many of Japan's own traditions. Japan had long held hard work and quality craftsmanship as important virtues, and its technology even during the war surprised many Americans. Deming preached that companies must treat workers as associates, not hired hands, and he blamed management if workers were not motivated to work well." Today outstanding Japanese companies receive the Deming Application Prize for excellence in total quality management.

Back in Michigan in the '70s, I read article after article about how the Big Three should/could/would respond to the foreign invasion. But in practice, I saw excuses and pleas for protectionism.

"Why doesn't General Motors," I recall asking my roommate, "offer a boatload of money, steal Toyota's No. 2 executive and put him in charge?" My roommate laughed, "Because he doesn't speak English and wouldn't be able to understand the American market." I said, "And General Motors does?"

Today I know that my idea of stealing a Toyota exec was bad. GM should have picked up the phone, asked the government to buy a majority share in the company, handed the office keys to the President of the United States, and said, "Here. You run it."