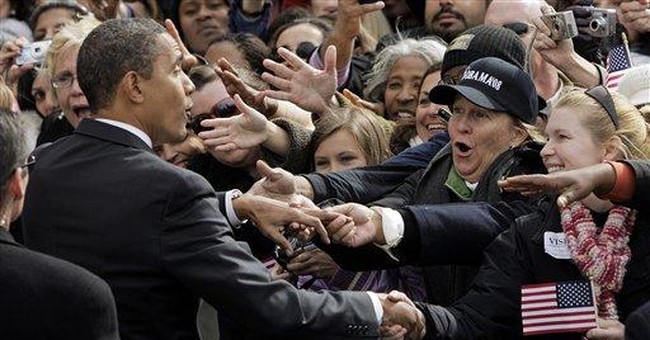 Biden: Are you joking? Is this a joke?

Biden: Or is that a real question?

The none-too-happy Biden denied that Obama wants to spread the wealth -- even though Obama used that exact term. When later given a chance on Good Morning America to retract, refute or moderate the statement he made to Joe the Plumber, Obama stood his ground.

Co-host: Any regrets that you ... said spread the wealth?

Obama: Not at all. Look, if John McCains best argument is that he wants to continue the same Bush tax cuts for the very wealthiest Americans it will prevent the economy from recovering.

Now comes a 2001 Chicago radio interview with then Illinois state Sen. Barack Obama. If you look at the victories and failures of the civil rights movement and its litigation strategy in the court, said Obama, the Supreme Court never ventured into the issues of redistribution of wealth It didnt break free from the essential constraints that were placed by the Founding Fathers in the Constitution.

Calling it congressional overreach, the Supreme Court routinely struck down major portions of considered Franklin D. Roosevelts New Deal. They considered it an assault on the Constitution. Only when FDR threatened to pack the court with New Deal-friendly justices, did the court crumble and begin to interpret the Constitution through the eyes of Roosevelts collectivist eyes.

The framers of the Constitution expected a limited federal government. They viewed the Constitution as a contract between citizens and government, designed to restrain the fed from undue intrusion into our bedrooms and our wallets. For example, the father of the Constitution, James Madison, vehemently objected to a 1792 congressional appropriation of $15,000 to assist some French refugees. Madison wrote, I cannot undertake to lay my finger on that article of the Constitution which granted a right to Congress of expending, on objects of benevolence, the money of their constituents.

But rarely does a politician -- even a leftist Democrat -- flat-out say he intends to take money out of Pocket A and put it into Pocket B in order to spread the wealth. Usually politicians justify the money and power grab by calling it an investment. Or they falsely and unconstitutionally call things like health care, education or job training civil rights.

The issue to Obama turns not on whether government exists to redistribute the wealth, but on how it should be done. But he intends for it to be done.

Expect an Obama presidency to try and spread the wealth in two ways -- through Congress and through the courts. He first wants to raise taxes -- income, payroll, capital gains, dividends and estate -- on the so-called rich. After all, he calls this a matter of neighborliness. Biden calls it a matter of patriotism. Second, Obama wants to appoint judges who view the Constitution not as a contract, but as an obstacle to circumvent. We need somebody whos got the heart, the empathy, he said, in describing his standards for Supreme Court justices, to recognize what its like to be a young teenage mom. The empathy to understand what its like to be poor, or African-American, or gay, or disabled, or old. And thats the criteria by which Im going to be selecting my judges.

Through the feds so-called bailout of private firms and private actors -- with the approval of both Democrats and Republicans -- we now witness the greatest increase in federal power since the New Deal. More horrifying, America now stands on the brink of electing a filibuster-proof collectivist Democrat Congress with a nakedly collectivist Democrat president leading the charge.

Wurzelbacher told me that he plans to campaign -- at his own request -- for John McCain. Why? He calls Obamas spread the wealth plan scary.

Wish we could say it aint so, Joe.