Kyle Shideler
|
Posted: Jun 23, 2016 10:27 AM
Share   Tweet
The opinions expressed by columnists are their own and do not necessarily represent the views of Townhall.com. 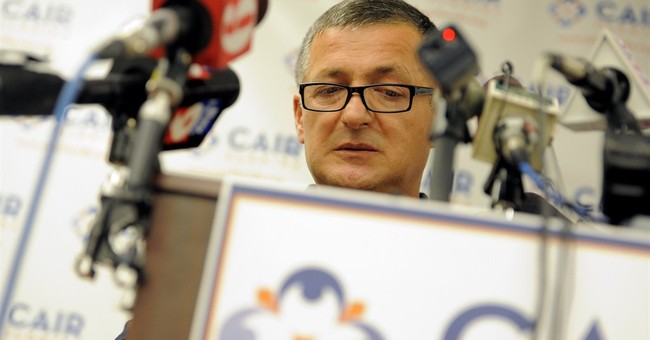 The case, Rene Arturo Lopez, et al v. Council On American Islamic Relations Action Network revolves around the actions of Morris Days, who served as a Civil Rights Manager for CAIR’s Virginia chapter. Days, who represented himself as a lawyer despite not having a law degree, took money from individuals seeking civil rights assistance but never provided appropriate legal services.

An earlier trial court granted CAIR’s request for summary judgment, but that claim was overturned on appeal, with the Appellate court ruling that there is sufficient evidence for a jury trial in the case.

The lawsuit alleges that when the CAIR National office found out about Day’s scam they eventually fired him, but instead of coming clean to the victims and law enforcement, CAIR made efforts to conceal Day’s activities.

Key to the case is the degree to which individual CAIR chapters, such as the now defunct CAIR Virginia chapter, are only loosely aligned affiliates, or tightly controlled subordinates to CAIR National. This is significant because the FBI prohibits agents from dealing with CAIR National, due to the documented ties of its founders, Omar Ahmad and current executive director Nihad Awad to Hamas.

The plaintiffs, consisting of three Muslim Americans and two non-Muslims who all sought civil rights assistance from CAIR, allege that CAIR both profited from Day’s deception, using Day’s false credentials as a lawyer on advertisements and keeping national records of civil rights cases worked by CAIR chapters at the national office. They also allege CAIR National sought to cover up the fraud, by seizing records and shuttering the CAIR Virginia office after evidence of Day’s deception came to light.

CAIR Virginia was previously known for legal entanglements. Former Virginia CAIR director, Abdurrahman Alamoudi, whom the Treasury Department says was a major Al Qaeda financer, was convicted and sentenced to more than 20 years in prison for a plot to kill the then Saudi Crown Prince.

This is not the first time Muslim Americans have accused CAIR of interfering with their efforts to receive American justice. In 2009, members of the Somali community in Minneapolis led a protest against CAIR, alleging the group was actively silencing parents who sought FBI assistance in finding their sons, whom they feared had been recruited by terrorist organization Al Shabaab.

Critics say CAIR has long intimidated the Muslim community to avoid speaking out, including creating posters urging Muslims not to contact or speak to law enforcement, and even putting out bounties for the identifies of Muslim informants working with federal authorities.

The announcement that CAIR will face a trial by jury for it’s own alleged mistreatment of Muslim Americans comes at a bad time for the group, which recently released a report on Islamophobia. CAIR was already forced to cancel a press conference on the report following the jihadist terror attack in Orlando that killed 49 at a gay nightclub.

CAIR attempted to use the Orlando attack to make direct linkages between homophobia and Islamophobia, which itself led to criticism of anti-gay remarks made by Islamic scholars and Muslim leaders associated with CAIR.

CAIR’s report has already come under fire for lead author Hatem Bazian’s role in the American Muslims for Palestine. AMP has been identified by the Anti-Defamation League as having “provided a platform for anti-Semitism,” and the group’s ties to Hamas terror finance and involvement in Boycott, Divestment and Sanctions campaigns were the focus of recent testimony before a Congressional committee. Bazian’s accusations of Islamophobia extend even to the (almost entirely Muslim) Egyptian army, currently engaged in a struggle against jihadists in the Sinai.

There is an obvious irony with CAIR releasing a report on Islamophobia at a time the group itself will face justice for alleged defrauding Muslims and other minorities. A very public jury trial may serve as a reminder that CAIR serves only it’s own interests, and not that of the wider Muslim American community. Meanwhile the allegations of cover up and collusion make clear that CAIR, and it’s ravings about Islamophobia networks, are driven more by an institutional paranoia born of its roots in terror finance conspiracy than by facts.