Kyle Rittenhouse and the Red-Pilling of America

Kurt Schlichter
|
Posted: Nov 22, 2021 12:01 AM
Share   Tweet
The opinions expressed by columnists are their own and do not necessarily represent the views of Townhall.com. 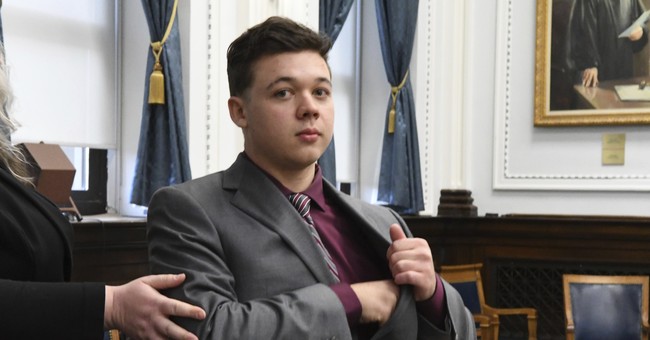 You know, a few more rampages by inept alleged “white supremacists” like Kyle Rittenhouse – he only managed to shoot white criminals! – and everybody is going to be thoroughly awakened to the reality of the leftist scam. The trial that followed the Kenosha Kid’s act of social hygiene constituted only one tab in the big bottle of scarlet pills America’s been force-fed lately. Others include being confronted at work with mandates for vaxes that don’t act as advertised, as well as being inundated with racist CRT garbage, and having one’s kids come home from school with creepy porno crap that makes you wonder if they hit up the Lincoln Project lending library.

There are more pills going on than in Hunter’s medicine cabinet.

Why the festival of figurative pharmaceuticals? Because the left got out over its skis. It went too far, too fast, and now normal folks who just want to live their lives and usually show no interest in political/cultural controversies are showing up at school board meetings asking why the hell their kids are accusing them of slavery. Combined with a crusty old pervert in the White House who is causing economic inflation and international humiliation, and the left is in trouble. Deep trouble. See, the truth is getting out despite the media’s lies. Its pet political party is looking at being demolished next November. But instead of slowing down and taking stock, the Marxists are doubling down on failure knowing they only have their micro-majorities for a year. This genius strategy got them Glenn Youngkin and will get them many more based pols who are many times more hardcore.

Remember, leftism only succeeds when surrounded by a fog of lies. When the fog lifts, people reject it. And the media pumped out all the fog it could. There were people who literally did not know the collection of criminals and/or perverts Kyle exorcised were as white as Mitt Romney at a Cure concert. Really. That was the media’s doing, lying that the only reason Kyle didn’t want to have his brains bashed in by these scumbags was his pallor and reporting that nonsense accordingly. But when people watched the trial, they saw something entirely different from what they had been fed by the Enemy of the People, and it stuck. People were shocked – not people like us who are fully woke to the fact the media is nothing more than a collection of semi-literate, poorly-paid hack transcriptionists for the liberal elite – to see that they were being lied to, and hard. Not little lies. Not careless errors. No, these were calculated, intentional lies designed to push the party line. And their lies were revealed to all in that Kenosha courtroom.

The liberal champions were Binger and Lunchbox, the Tweedle-Dee and Tweedle-Dumbass of assistant DAs who were incompetent when they weren’t straight-up lying. And people saw it all. Normal people, the kind who used to have some faith in the people in charge of the system.

In this, MSNBC did yeoman service – wait, is Joy Reid going to shriek that I assumed the gender of a yeo? Now, few people except communists, masochists, and people who can’t find the remote, watch that festival of cable onanism, so the big effect was not from its non-stop parade of ridiculous people crying about Kyle. No, it was these dummies’ decision to get caught stalking the jury in what was clearly an attempt to dox the jurors. Normal people may not know the statutes and code sections, but they have an understanding that you don’t mess with a deliberating jury. Congrats, MSNBC – you have amazingly managed to drive the reputation of the media even lower, and we thank you for it. We will not be happy until you have alienated every patriotic, non-pinko American!

You know who saved Kyle, and us? It was normal people who got woke to the lie, the jurors. They saw the evidence, or rather, the total absence of it. They deliberated for nearly 24 hours. They asked to review video. They asked to examine copies of the instructions. They – and even I was too cynical to see this coming in an era when every single institution from Hollywood to the Marines has failed us – did their job.

And Americans all over are doing their job, which the left hates. They are confronting school boards. They are voting for patriots. They are organizing. They are pushing back. Right now, the polling for the Democrats is positively gruesome, like that one guy’s bicep. It’s because people are getting activated. They are not sitting on the bench. 2022 is going to be epic.

GOP, take note of the Kyle Rittenhouse phenomenon. Understand why people get angry at school board meetings. Hear the Blank Joe Biden chants. Learn the right lessons from them. Don’t start up with the chin-stroking crap about, “Well, Kyle never should have been there.” Baloney. Americans have a right to be anywhere they damn well please. It’s the dirtbag degenerates who don’t have a right to be there, burning and looting. They don’t have a right to burn and loot in peace. We have a right to be ticked off at CRT and other perversions inflicted on our kids, and if we are rude to bureaucrats, too bad. And who cares if fed-up people yell dirty words about Grandpa Badfinger? Stop clutching your pearls. Stop playing the left’s game because you think it might make you seem “reasonable” and avoid uncomfortable conversations at the country club. Take our side in the fight.

Take Kyle’s side. Take the parents’ side. Take the drunk college kids’ side. Take our side, or you’ll be pushed aside. Be based or be Liz Cheney – you pols are fungible and if you fail to perform there’s someone with testosterone who can replace you.

The American people are waking up and taking their own side in this fight. Kyle. Virginia. Let’s go, Brandon. The GOP must be dragged into the next round of the fight, and it damn well better stop resisting us and start resisting the left.

Conservatives Must Stand Together and Fight. Join Townhall VIP. And Check Out Last Week's Stream of Kurtiousness, Rittenhouse Deserves a Freaking Medal. And my podcast, Unredacted.

Lock and load my sixth Kelly Turnbull conservative action thriller, The Split! It shows what happens when America splits into red and blue countries. Get all six bestsellers, including People's Republic, Indian Country, Wildfire, Collapse, and Crisis!