This Guy Is Senile and Can the Media Stop Pretending He’s Not?

Kurt Schlichter
|
Posted: Sep 02, 2021 12:01 AM
Share   Tweet
The opinions expressed by columnists are their own and do not necessarily represent the views of Townhall.com. 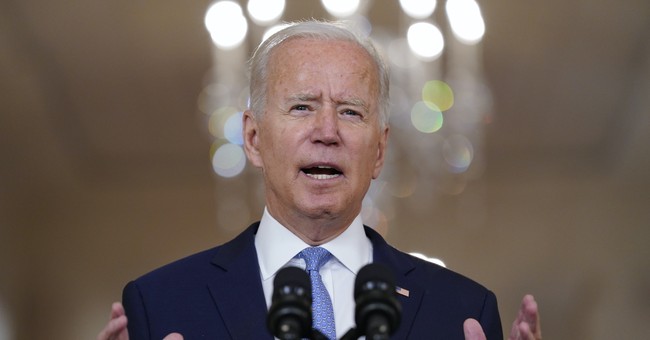 Look, Biden is senile. He was always stupid, and always stubbornly attached to whatever dumb ideas formed in the spongy mass of cells that passes for his brain, but now it’s perfectly clear that this guy is riding the Acela Express to Dementiaville. And the media, sitting front row on what could be the biggest story in political history, just sort of pretends that the guy who is one forgotten Depends short of wetting himself on national television is A-OK.

But the job of the licensed, registered regime media is not to break stories, no matter how big. It’s to run interference for its masters. In the run up to the last election, our courageous reporters studiously ignored the computer files and videos showing *’s son Hoover getting all Pablo Escobar with his hookers, as well as being bought off by Ukrainians, Chi Coms, and anyone else who waved a dollar at him. That was Russian disinformation, we were informed by our glorious media. So, is Putin also behind Biden wandering off to chase squirrels in the Rose Garden?

Just listen to the guy on the rare occasions they pump him up with drugs and let him talk. His Afghanistan victory lap – though it was the eager liberal blue checks that did the lapping – was a bizarre Escher monologue: “Our intel people did a great job but no one saw this coming and it was the greatest evacuation ever and also it was all Trump’s fault.”

He’s a mess, yet the only person we ever see committing felony journalism is Peter Doocy of Fox, much to the dismay of the rest of the reporters. They are all busy competing for the big scoop about the flavor of the latest big scoop of ice cream Dr. Jill let’s Grandpa Badfinger stick in his talkhole.

It was the same with the reporters back in Camelot – which President Kennedy did with the full knowledge of his reporter pals. Maybe it’s a bad idea for the prezzy to get busy with gangsters’ molls, and perhaps boffing White House staffers two at a time in the pool isn’t a demonstration of the best judgment. But the media was mum. After all, boys will be boys – at least in the Sixties, unlike now when they can be pretty much anything and we’re supposed to pretend it’s not ridiculous. Props on tagging Marilyn Monroe, but really? If she had a skirt and a heartbeat, she was fair game for JFK. Teddy, of course, was only half as picky.

And our media heroes covered it up, only to – years later – admit that maybe they could have been a bit more diligent and a bit less accommodating to the peccadillos of their idol. There was much assurance among the professional journalismers that never again would they participate in this kind of cozy covering-up for politicians. And they didn’t – for any Republican.

And now with President Asterisk, their lack of curiosity would be hilarious if it wasn’t getting people killed. The media gave Mr. 10% a pass on Snorty McBurisma, then ignored the election antics, then pretended a guy in Conan drag was leading an insurrection, then blessed the whiplash-inducing 180 spin on vaccines – “Trump vaccine bad, Trump vaccine we can take credit for good!” – and now they are acting like this goober is just fine.

The best part is when Biden just goes and gives away the scam, whether announcing that he’s been ordered not to answer questions or that he’s got a list of pre-approved questions he has to follow. Imagine the faux outrage if Kayleigh McEnany or Sarah Huckabee Sanders approached the White House correspondents/apparatchiks and demanded to prescreen their queries. “BUT MUH JOURNALISTIC INTEGRITIES!” they would huff and puff.

Today? “Pre-screened questions? Yes, Mistress Jenn! Might your worm have the privilege of licking your vinyl boots? Slurp, slurp, slurp.”

He’s angry and shouts, or he whispers like he’s offering passing kids a chance to see the puppies he’s got in his van. And whatever dope they pump him up with to get through the list of scripted questions lasts maybe ten minutes, and then you can see the wheels coming off. Out comes the shepherd’s crook to drag him off-stage to be wrapped in a shawl, handed a bowl of mush, and set in front of the tee vee to watch his stories.

Look, no one’s excited about the 25th Amendment putting Kamala Harris in office. The woman is as dumb as a post, which is a vile calumny to useful and honorable posts everywhere. But we can’t have the shaky, skeletal finger of a vacuum-skulled ninny hovering over the big red button. Our press may studiously ignore it, but our enemies see it and they are acting. The Taliban – or, as that goofy clown says, the “Tally-ban” – realized he would not do anything to stop them and we saw what that led to. The Chi Coms are elbowing Taiwan, saying “Hey, there’s your savior – wanna do this the easy way or the hard way?” And that fat Korean guy is firing up the old reactor again.

They try to slough off his constant failures on the previous guy, but come on. You know, at a certain point, you have to stop blaming Trump for everything. Trump was a lot of things, but a drooling zombie wasn’t one of them.

This is serious business, and we have been bequeathed an unserious media, one that understands its role as supporting and reinforcing the bullSchiff narrative of its political masters. It’s all fun and games until we face the deadly reality that we have real enemies in the world – not unhappy Trump voters, not science deniers, not people who don’t validate the BIPOC trans experience sufficiently, but real enemies who want us dead. That manifested in Kabul, and that led to 13 coffins getting carried off a C-17 at Dover while President Magoo checked his Rolex. Perhaps he had somewhere better to be. Perhaps he was worried he’d miss Matlock. Perhaps he just didn’t give a damn.

Our media is garbage. This staggering shell of an always mediocre man is manifestly unfit, physically and mentally (not to mention in terms of basic competence) to be president. And the brave firefighting truth-tellers of the media say nothing, which says all we need to know about them.

He’s senile. Time to say it out loud. And to get rid of him.

My latest conservative action thriller, The Split, is about what happens when America splits into red and blue countries. Get all six bestsellers, including People's Republic, Indian Country, Wildfire, Collapse, and Crisis!