Our Military Is A Woke Joke

Kurt Schlichter
|
Posted: Aug 16, 2021 12:01 AM
Share   Tweet
The opinions expressed by columnists are their own and do not necessarily represent the views of Townhall.com. 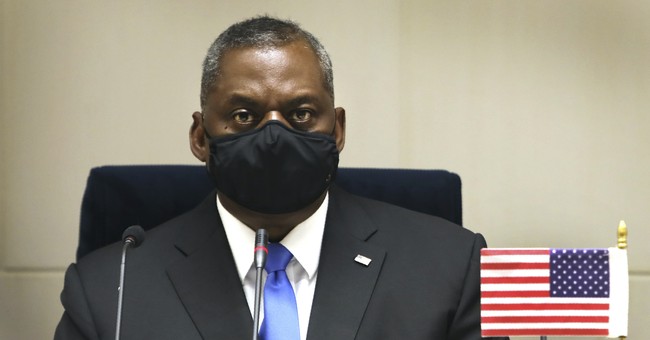 Ignore those pictures of the Afghan army that our military senior leader geniuses spent 20 years and zillions of dollars on disintegrating in the face of a pack of glorified mountain banditos from the Seventh Century – the real story is that, finally, America’s fighting men and women are fully aware of the urgency of accepting and validating the trans experience. And it's even better if said trans people are BIPOC. Plus differently abled.

Our broke, woke armed forces would be a hysterically funny punchline if the joke wasn’t, “The greatest military in human history walks into a bar, puts down trillions of dollars and buckets of American blood, and asks the bartender, ‘So, what would it look like if all the generals and admirals sucked-up to the garbage establishment that has totally failed the people of the USA?’”

Yes, it is a joke, a sick one. Fire all the generals. Invite a few back, maybe a dozen. Clean out the Pentagon. Can all the “Diversity Consultants,” “Equal Opportunity Officers,” “Climate Change Mitigation Specialists,” and every other strap-hanging oxygen thief who doesn’t contribute to the only thing the military should be focusing on right now – putting Chi Coms in graves.

Yeah, there’s been a strategic failure of epic proportions by our civilian establishment. We need to fix that at the ballot box by tossing out every Democrat and every Liz Cheney-esque combat tourist who delights in sending our young people overseas to get ground up in idiotic wars designed to enrich their cronies. Hardest hit at the end of Afghanistan: Haliburton, Raytheon, KBR, and a hundred other contractors you never heard of. Oh, and the Afghan people, but they never really figured into this calculus except in the abstract idea that we were going to convert a nation of savages into Lil’ Vermonters living the Norman Rockwell dream of community democracy.

Twenty years of failure. Twenty years. How far and fast we fell. I was there thirty years ago, in VII Corps main, contributing my car washing skills, when the greatest military force in human history annihilated a country’s entire army in 100 hours and barely broke a sweat doing it. Amazingly, we did it without giving a single thought to our alleged privilege – to the extent cracking over reeking half-barrels in wooden outhouses in the middle of the desert constituted privilege.

Look at us now. Look at the generals, in their stupid throwback uniforms from the Forties that are supposed to make the gender studies seminar we call the US Army think it’s the same force that broke Hitler. It’s not. A serious organization does not alternate its designation of America’s most serious threat between the weather, “racism,” and other Americans who dissent from the generals’ bosses’ political priorities.

The Navy is busy smashing ships into each other, or letting them burn, but it will tell you it’s the most effective, lethal fighting force ever. Baloney. It’s glided along on its WW2 legacy as well for going onto a century. It imagines that its glorious naval tradition is going to compensate for the fact that the Chinese are actually building combat-ready ships and learning how to use them. The Carthaginians were like that too – fat, smug, and eager to sacrifice their children to Moloch, just like our garbage elite. The Romans, who had no naval tradition, took one of their boats and copied it. Sound familiar? Then they built a navy. Also ring a bell? Then the Romans cleared the seas of Carthaginians and went on to rule the world for another 500+ years while Carthage’s field can still provide for all your sodium chloride needs.

By the time you read this missive, there will probably be little or no Afghanistan left unTalibanned – its capitals are getting grabbed up faster than the blueberry muffins at a Vindman family reunion. That guy represents everything wrong with our military and our elite – a mediocrity who stabbed his boss (and the American people) in the back by taking it upon himself to make foreign policy rather than help the guy elected to do so – is held up as an exemplar by our pathetic ruling caste. Recently, he posed (cringingly) with another disappointment who was tested and found wanting, the withered and wrinkly Arnold Schwarzenegger. Arnold the action hero is now just a grouchy old man with barely the virility to sex pester his maid anymore. That’s our military folks – the tough image hiding a pathetic reality. Like The Impregnator when he botched governing California, our military botches its one job when it fights anyone not willing to just roll over.

We saw the root cause when we watched those generals, bedecked in medals from their failed campaigns, sitting before Congress and defending their stupid reading lists consisting of the kind of stupid books that vapid, frigid Chardonnay junkies from Santa Monica read, not combat leaders. Move over, Sun Tzu – Henry “Ibram X. Kendi” Rogers has some insights into why the country you swore to die for sucks. That should motivate that 19-year old paratrooper from Omaha to take that hill! Thucydides, who we need more than ever right now, gets out of the way – here comes “Dr.” Robin DiAngelo to explain how everyone is racist, especially you. So wait, your job is to give your life…for racists?

No wonder we lose. We’re not a serious military. It’s now a jobs program for semi-employable field grade and flag officer failures to time-serve in until they can retire and get a sweet, sweet gig at Boeingrayheedynamics.

Who got fired for losing Afghanistan? No one (and don’t say David McKiernan, a solid officer who was politely asked to leave, not relieved, purely for show).

And no one ever will. Accountability, the garlic to the vampires of our failed ruling caste, is just as foreign to the American military leadership as it is to our civilian leaders.

We will lose the next foreign war, which will most likely be with China. Thousands of Americans will die when their ships go down to PRA hypersonic missiles, and, after much soul-searching, the members of our establishment will determine that the fault lies with everyone else but them – especially you.

But the next war will probably not be a foreign one. Our lousy general officer corps got the message – the new enemy du jour is us. The dissenters. The deplorables. The ones they expect to breed the next generation of soldiers for them to play with – why, you couldn’t expect young Kaden from the Upper West Side to choose to be one of those dirty Marines instead of going to Dartmouth!

But on the bright side, when they try to turn the American military on the American people (“Kurt, you’re being crazy again. Also, it’s good that unarmed conservative vet Ashli Babbit was shot for trespassing and I support the Australians sending their army to make sure every kangaroo jockey downunder has a towel wrapped around his Foster’s hole.”) don’t worry too much. There’s no reason to believe that whatever remains undeserted of the two million or so active and reserve troops we have now will be any more effective here in CONUS against 100 million armed patriots with a significant number of vets of America’s military from when it didn’t suck than it was against those patient tribesmen in the Hindu Kush.

There’s hope for a rebirth – as a hierarchical organization, the military responds to what its civilian leadership demands. The current crop of lap dogs understood that President Asterisk wants wokeness and weather panic, and he got it. President DeSantis, after he fires just about everyone 07 and up (and a lot of O6s) must tell the remaining guys who will need to re-do the post-‘Nam rebuild that their focus is warfighting, warfighting, and more warfighting, and that the enemy is not racial hustles, the climate, or American patriots.

Conservatives Must Stand Together and Fight. Join Townhall VIP. And Check Out Last Week's Stream of Kurtiousness, A Total Failure on Every Level. And my podcast, Unredacted.