Kurt Schlichter
|
Posted: Jun 23, 2021 12:01 AM
Share   Tweet
The opinions expressed by columnists are their own and do not necessarily represent the views of Townhall.com. 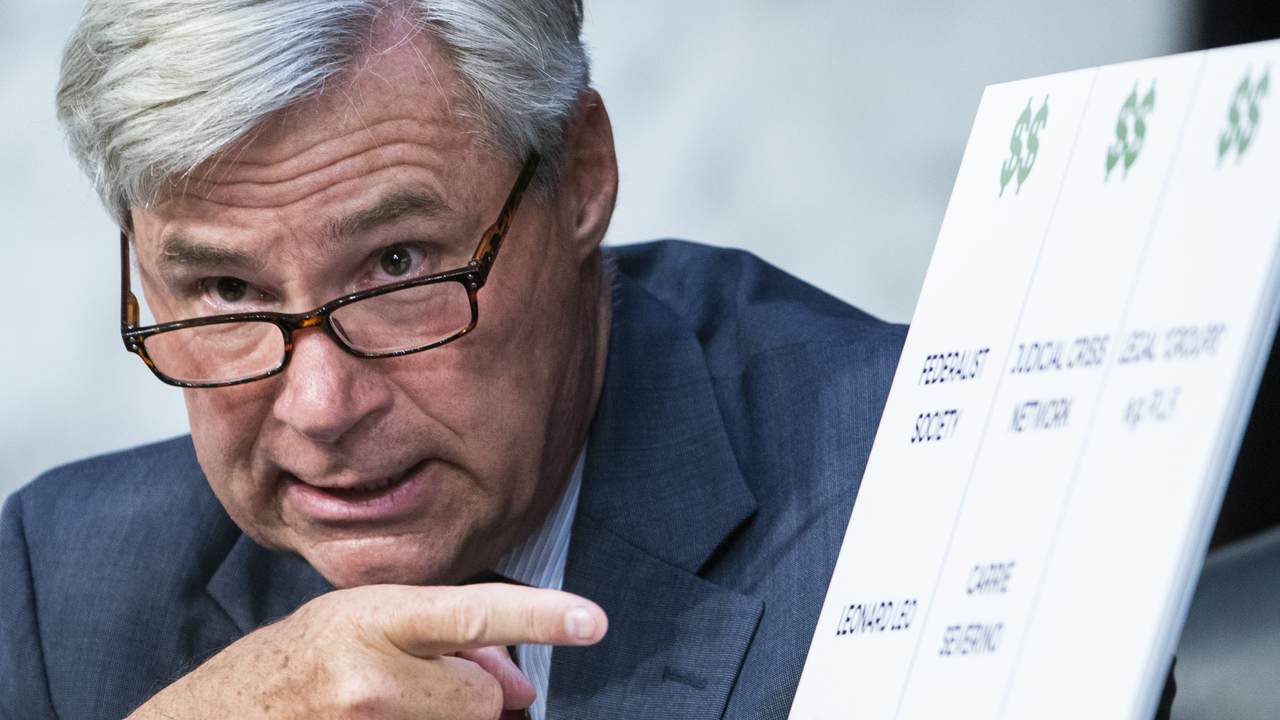 That unctuous ninny Senator Sheldon Whitehouse just got busted for still being a member of the all-white Bailey's Beach Club because of course he is. Now, possibly only Mitt Romney could beat him for the title “THE MOST UNETHNIC MAN IN THE WORLD,” but you would think that merely as a matter of covering his pasty backside this Rhode Island doofus would have quit Camp George Wallace years ago. But no, he didn’t – it’s “a long tradition,” you know, which I guess he imagines makes it better. So, we need to rub his smug, pale face in this, not that his party could care less.

So, let’s have a real conversation about race, and more specifically, how Sheldon Whitehouse is against other races being around him.

Time for some real talk. This is a hate crime.

I am literally shaking that cis-normative person of extreme pallor Sheldon Whitehouse has denied the existence of BIPOC peoples through his membership in a racist club in his home state of Rhode Island, which was built on slavery for some reason.

Even his name is triggering – “Whitehouse.” Does it get more excluding?

It is exhausting dealing with the trauma people like Sheldon Whitehouse inflict upon us every day. Next, we’re going to find out that his club – or should it be his “KKKlub?” – requires ID, which we have been informed – by Sheldon Whitehouse and his friends – is racist.

This is spirit murder.

And he now needs to do the work. So very much work. But that’s not enough.

I feel unsafe because Whitehouse (THAT NAME!) and his whole hood n’ thong-clad surf set are not being held accountable for their complicity in the structural racism endemic to the Ocean State. Except it has another nickname: The Plantation State. Yeah, this state’s official name is "the State of Rhode Island and Providence Plantations."

All the pieces fit. Rhode Island, and specifically his stupid beach club, were built on genocide and slavery. First, their ancestors stole the beach from the Native Americans. Then they caused slavery somehow. Then this.

Again, I am literally shaking.

Except I am not. This is the limo libs’ jam, not ours. I don’t know about you, but it’s a pretty good guess that you don’t belong to some fancy club on the prime strip of however much beach Rhode Island actually has either. We aren’t the New York Times reading swells who sniff at all the alleged bigotry out in America and then retreat into our little enclaves that have all the diversity of a Cheney family reunion. And we wouldn’t be members of such a club if asked, because segregation is stupid and evil, and because we’d rather bathe in premium unleaded then light a stogie rather than hang out with the likes of Sheldon Whitehouse and his stuffy lib partners in hate crime.

You know who famously opened up his club to everyone when the other clubs in town wouldn’t? Donald Trump. The guy we voted for. The guy Sheldon voted against.

Same with the sexual abusers. Question: If your daughter’s car had a flat on a lonely road, who would you rather have stop to help her fix it? A red-hat wearing Trump voter in a Ford F-150, or some liberal male-identifying being sporting an “I’m With Her” sticker on his Prius?

Trick question – liberal men are too sissy to change tires. But you get the point.

And this development is the least surprising twist we’ve seen in the annals of American political idiocy since it came out that Eric “Blue Flame” Swalwell thought that the Chic Com chicky he was interfacing with dug him because she thought he was a sexy, swinging stud instead of a sulphureous sap.

See, this is what happens when you assume the media will always cover for you – some lesser-known media outlet you don’t get to dictate to might come along and out you. Whitehouse was a member of Klub Klan forever, secure in the knowledge that the entire mainstream media was going to go full “Look, a squirrel!” whenever something like Hoover Biden’s laptop came up, confident that they’d never call him on being a member of a club where the patrons make the fans at a Cure concert look tan.

So, what will happen now?

Probably nothing. That’s the Whitehouse privilege, a species of Democrat privilege. Join a racist club? No biggie. Grope a subordinate under Capitol Hill? Call her a liar. And in the macro, oversee the urban blue war zones that see dozens of minority Americans murdered every week because faculty lounge Marxists proclaimed that we must defund the police? Obviously, blame those citizens with guns who don’t live there and never murdered anyone.

The Democrats don’t care. Half of them will probably hit Whitey up for a membership application when the fuss dies down. And soon this pompous joke will no doubt wander down to the Senate floor to once against lie about Republicans doing exactly what he actually is doing. It won’t matter, at least not to his comrades. The political party that lays claim to fighting racism and sexism has never done either. It supports those things, especially when it comes to its pasty poohbahs.

For too long, these hypothetical frauds have occupied the moral high ground. Time to desegregate it.

July will bring my sixth Kelly Turnbull action thriller, The Split. Get the most recent bestseller, Crisis as well as my other four novels about what happens when America splits into red and blue countries, People's Republic, Indian Country, Wildfire, and Collapse!