Democrat Prospects Are Bleak As The Wacky Pack Takes Over

Kurt Schlichter
|
Posted: Jul 29, 2019 12:01 AM
Share   Tweet
The opinions expressed by columnists are their own and do not necessarily represent the views of Townhall.com. 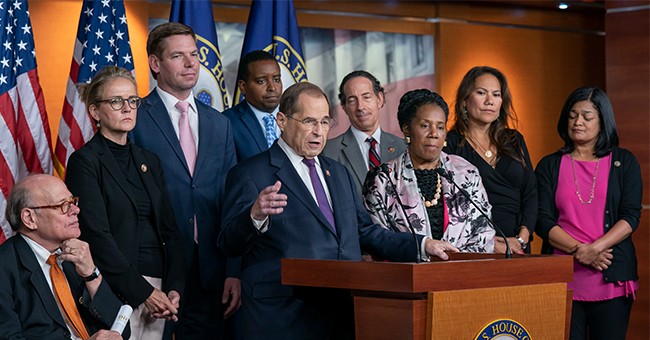 Donald Trump is the odds-on fave to win reelection, and the Republicans can take back the House and keep the Senate if they aren’t stupid and incompetent – meaning it’s far from a done deal. But the Democrats are in a terrible position. The just and satisfying utter humiliation of crusty establishment hack Bob Mueller left them without a lot of good options going forward, since not being leftist idiots is obviously off the table. What do they do now that the entire soft coup hoax is a heap of garbage smoldering in the dumpster of American politics?

Do they stick with Putin paranoia? Do they pivot to talking about their party’s platform? “Hey America, let’s invite the entire world in and you get to pay for their stuff. And also for everyone else’s college. And you also get to repay the debt you don’t owe to people who weren’t slaves. And we’re banning SUVs and BBQs because of the weather in 2119. Vote Democrat!” This is not a viable policy program, except in the freaks how hothouse of some pinko-filled town hall conducted by the Socialist Squaw, Spartacus or Beto, who is a furry.

One option is to shut their eyes real tight, cover their ears and screech, “La la la la la la I can’t hear you!” This is why we were treated to the phenom of the Marxist marionettes on the MSNBCNNs and at the WaPos, as well as the commie blue checks on Twitter (whose new lay-out sucks – how come social media evolution always seems to mean that the product gets worse?), panicking for a bit before calming down and settling on a post-Mueller testimony narrative, which was essentially, “What Mueller testimony?”

Another tactic is to double down on a bad hand – sort of like in blackjack when the dealer is showing a king and you have sixteen. Jerry Nadler cinched his belt tightly about his sternum, waddled up to the podium and announced that Mueller was no biggie and that The Nad was nowhere near finished with his investigation and that there was devastating evidence out there that Trump might have intentionally removed a mattress tag at Mar-A-Lago in 1972 at the behest of Boy Putin. Too bad for Big Jerry that moving goalposts doesn’t count as exercise.

This is all bad news for the purple district Dems who ran in 2018 pretending that they were independent moderates who wanted to find solutions and work together to make a brighter tomorrow and blah blah blah blah blah. They specifically targeted the wussy suburban Republicans who found Trump icky but who would never vote for some brother-marrying loon or toothy commie cartoon character. Except those kooks are now in command in the Democrat Party and the pseudo-centrists are going to get them hung around their necks.

What the Blue Dork Dems would like to do is change the subject, but of course that would mean talking policy and popular policies are not the Democrats’ strong suit. There is just not a lot of enthusiasm out there in America for a bunch of schemes that generally involve Democrat-disfavored people like you and me paying our hard-earned money to subsidize Democrat-favored demographics like illegal aliens, shiftless bums, snooty academics and militant Maoist pottery majors.

That’s why their current strategy is to try to capitalize on squishy suburban mommies’ loathing of Trump’s colorful character (Just pay no attention to the 3% unemployment and your expanding 401K behind the curtain!) and to paint themselves as solution-oriented problem solvers who solve problems using solutions. But then Congresswoman Bro-Hubby starts piping up with her own quirky riff on The Protocols of the Elders of Zion and voters remember who’s actually running the show down at Donkey HQ.

You would hope the GOP would take advantage of this. Cocaine Mitch, when he’s not churning out judge after wall-affirming judge, should be setting up vote after vote after vote on heinous Democrat proposals to get lib senators on the record and challenge ringmistress Nancy Pelosi to do the same. Republicans can slam their opponents for sticking with the Russia Neverending Story-ski, and then slam them again when the libs try to pivot to something else. Luckily, the GOP is full of savvy political geniuses who would never be so inept as to squander a winning hand by being stupid and weak.

Speaking of stupid and weak, count on the Fredocon cruise crew at Conservative, Inc., to leverage its uncanny ability to achieve defeat in the face of overwhelming opportunity and to try to help the Democrats by changing the subject. It’s already starting. After putting their chips on the RUSSIA TREASON EMOULUMENTS TRAITOR COLLUSION MORE TREASON thing, some of our betters have decided that the best way to deal with the insane and begging-to-be-mocked Green New Deal is not to jam it down the moderates’ throats (“Hey soccer moms – that Ford Expedition you cart around your kids in is a no-go because of Gaia.”) but to embrace it. Yeah, because True Conservatism™ now means buying into the global warming hoax for some reason.

Frank Luntz, who is a less entertaining Dick Morris without the credibility, and of course David French, both bought into the grift, but then again are you really surprised? Luntz famously announced “In case I wasn't clear enough from my previous tweets: Hillary Clinton will be the next President of the United States.  #ElectionNight” on November 8, 2016, while French’s schtick for the last few years has been that Jesus hates Trump and, by extension, you. Conservatism for the Never Trump set was always about conserving their influence. Maybe they hope the pagan hot weather gods will make their Trumpy pain go away if they just pray to the climate fraud idols hard enough. Ahoy!

The congressional Democrats are in a miserable position. Their party is under internal attack by leftist loons whose approval ratings are on par with syphilis. Their last three years were wasted chasing the collusion chimera. Their party platform demands Americans give up their doctors, their guns, their cars and their money. The only thing they have going for them is that their opponents are the Republicans. Come to think of it, the odds might actually be in their favor.

For a look at what happens if Trump and the GOP fail, check out my action-packed yet hilarious novels about the United States’ split into red and blue countries, People's Republic, Indian Country and Wildfire. These liberal-infuriating books have been called “Appalling” and have earned the hatred of loser leftists and the hapless geebos who sank the Weekly Standard. This is the Pulitzer Prize for people who aren’t terrible!