Students, Here’s A Plan To Solve Your Debt Problem (You Won’t Like It)

Kurt Schlichter
|
Posted: May 30, 2019 12:01 AM
Share   Tweet
The opinions expressed by columnists are their own and do not necessarily represent the views of Townhall.com. 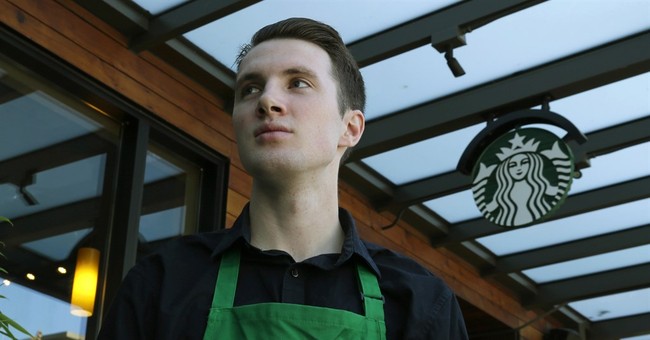 So, you’re a barista with a problem – you took out $200K student loans to get that master’s degree from Gumbo State in “LGBTQ2#v& Experiences as Reflected in 17th Century Bolivian Folk Songs” and now you can’t find an uncaffeinated career. Worse, those fascist monsters who you took money from based on your agreement to pay it back with interest now expect you to pay the money back with interest despite the fact that you really don’t feel like it anymore.

Well, I have a fresh solution to this crisis.

It’s an innovative strategy that totally and permanently resolves this problem in a new and exciting way.

How about you pay your own student debt?

If you follow this bold, one-step program – the one step is you paying your debts – then you will eventually be debt-free. And best of all, I won’t have to pay any of your debts.

See, a lot of Democrat politicians are promising “free college,” but what they really mean is “free for you.” Someone has to pay, and that someone is me, and I need to level with you.

I am not interested in paying for your college.

Now, some may call me “greedy” or “selfish” for not wishing to work and then have the money I earned taken from me to provide things to you that you want but did not pay for instead of being able to spend it – the “it” being the money I earned – on things that I want. I am okay with that. I would much prefer having people who fundamentally misunderstand the concepts of greed and selfishness call me “greedy” and “selfish” than subsidize their educations, educations that evidently did not include learning about basic concepts like greed and selfishness.

I understand that your priorities for my money may differ from mine, but it being my money, my priorities should take precedence. Here is a short, partial list of things that I prioritize for my money over paying off your student loan debts:

1. A lease on a sweet German sedan

5. A pedicure for my wife

6. A pedicure for me

7. A pedicure for my fat corgi Bitey

8. Literally anything else but your student loan debt

For instance, sometimes they say that us working to give other people free stuff is an “investment.” Again with the not understanding what words means…

Traditionally, with an investment, one gets a return on investment. No one ever explains what my return on investment for Kaden’s Marxist Puppetry degree might be, other than an occasional latte which I would still have to pay for. I prefer that I instead determine how to invest my own money in order to benefit myself, which I do not see as unreasonable since it is my money. Which I earned by working.

This is the beauty of my one-step student loan plan. It puts all this controversy aside. Pay your own student loan off. That’s it. End of discussion. Now get to work.

Note that I am not pointing out how I managed to fund my own education without asking strangers to chip in – actually, without forcing them to chip in, because if you don’t pay your taxes designed to fund “free college” people with guns will come to haul you away. The argument that “I paid for mine so you should pay for you own” is valid, but we need not even reach it. No one should ever be forced to give other people free stuff. It’s my money, and that’s reason enough why you can’t have it.

I certainly understand that academia is a scam and that the government allows lending to people who foolishly undertake debts that they cannot pay. I would stop it all – no government participation in the student loan industry and full bankruptcy dischargeability for student debts. Of course, this would mean many less people taking loans, and therefore fewer college students. No lose to society there. This means many colleges would actually start having to compete for students, and even – gasp – lower prices. Sounds good to me, though they would scream bloody murder – colleges have gotten fat off of loan money and many schools would go under without this pot of suckers’ cash. Oh well.

Sure, academia is a grift, but you did sign on the line that is dotted. You took the money. And I say that you pay it back instead of me.

Now, I have read many tales of woe from people who have taken out huge student loans and have not taken jobs that pay enough to support paying them off. Yes, this is a problem. But it is your problem.

Often, after I suggest my patented student loan debt resolution system – which is, in its entirety, “Pay your own debts” – people who have taken out debts they can’t pay will ask me “Well, how do I do that?”

And my answer is, “I don’t know, because it’s not my problem. It’s your problem. You’re an adult, with at least one degree, so you figure it out.”

Now, I can provide some helpful suggestions, if you wish to hear them. You won’t like them, because all of them recognize that your problem is your problem, not mine, and all of them require you to do things that you would probably prefer not to do. These suggestions include:

1. Get a better job. You can thank President Trump for the record low unemployment rate. Sure, you might not be able to continue at your dream job because it does not pay enough, but too bad. I’d rather pay for my own dreams.

2. Get a second job. Yeah, that will cut into your free time. Better that than paying your debt off cutting into mine.

Now, let me once more provide you with my student debt solution.

Here it is again.

Pay your own student debt.

Creating a debtor class of over-educated, under-smart serfs with gender studies degrees is another Cloward-Piven-seque ploy to undermine our society in the pursuit of the socialist Utopia our garbage ruling class seeks to command. Of course, this would be a Utopia built of envy, incompetence and lies. If you want to see the reality of the country they dream of, then check out my action-packed yet super-snarky novels about the United States’ split into red and blue countries, People's Republic, Indian Country and Wildfire.  Liberals hate my novels. The sissy castaways from the Weekly Standard call them “Appalling.” So, obviously you’ll call them “Awesome.”