The Elite Freaks Out When Trump Puts Americans First

Kurt Schlichter
|
Posted: Aug 09, 2018 12:01 AM
Share   Tweet
The opinions expressed by columnists are their own and do not necessarily represent the views of Townhall.com. 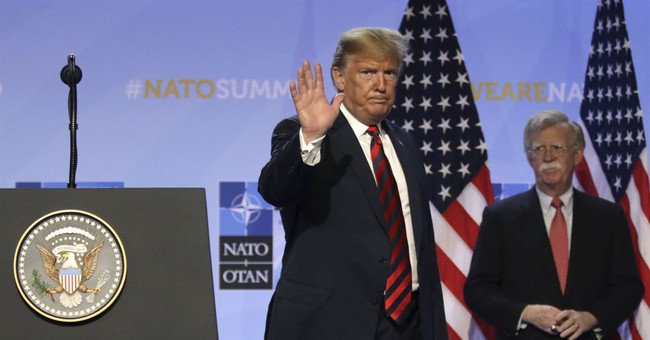 Of all Donald Trump’s many sins against the Great Church of the Transnational Leftist Establishment, his greatest may be his stubborn refusal to subordinate the needs of the normal citizens of the United States to the dogmas of our alleged betters. He rejects the secular civic religion of our betters, one that urges the sacrifice of regular folk’s interests on the altar of their self-regard and cheesy self-interest.

Trump is a heretic, a blasphemer, and it’s no surprise they want to burn him at the stake.

Horrors! He demands that the Europeans fund their own defense at levels that come to about half of what America spends!

Oh well, I never! He refuses to hobble the American economy as a tribute to the false god of the weird weather religion and he dumped the Paris Climate Grift!

Vapors! He rejects the notion that free trade is a one-way street into America’s markets and thinks that we ought to get the same deal on stuff we sell to outsiders as they get selling to us.

The bizarre part is that Trump isn’t even seeking an advantage over these foreigners who have been getting over on us. He seeks only reciprocity in our relations, and as a result the foreign policy elite is collectively wetting itself.

The post-war order did not start out as a massive scam, but we’re really far post the war today, and different times require different arrangements. Back in the late 1940s, with Europe in ruins and America relatively unscathed – actually, ascendant – it made sense for us to pick up the slack to help our allies get on their feet again. It was a hand-up, not a hand-out. The Marshall Plan, which rebuilt Europe, was genius – it created a bulwark against communism while ensuring prosperity.

But that was 70 years ago. Things change. The USSR is gone (a spectacular victory of the postwar order). Germany and the rest of Europe are no longer smoldering piles of rubble (another success). In fact, they are now prosperous and complacent, and of course they don’t want the American subsidy to end. It allows them to pay-off their barren, soul-dead populations via their bloated welfare states with the money they don’t have to contribute to their own defense. America snapping a ball and chain around its ankle in the form of the noxious climate pact lets them virtue signal, while unequal trade arrangements let them take advantage of our markets while blocking access to theirs. They can posture by importing half the Third World because our generosity (and gullibility) gives them the flexibility to do it.

It’s a great deal, for them. But after seven decades, it’s time for something new. And that’s where Donald Trump comes in.

The militant Normals, who get the bill for all this coddling, have been ticked off about it for a while. A lot of us actually served over there – and we know the Europeans have been able to half-step with their militaries for quite a while. Yeah, individual NATO warriors have been brave, and some have sacrificed their lives in battle beside Americans. We honor them. But their countries as a whole are not keeping their commitments, and the glorious achievements of their outnumbered, under-equipped soldiers do not excuse that basic reality.

The elite seeks to deny the truth. And failing that, it seeks to rid itself of this troublesome president. If you ever needed more proof that the Russia baloney was just a heap of rancid luncheon meat, ask yourself why the same idiots spewing spittle about “PUTIN COLLUSION TREASON!” are also outraged that Trump is demanding that other NATO countries actually build up their capacity to defeat the Bear in battle. Is the elite trying to keep NATO from getting stronger to own Putin and the cons?

I believe in NATO, and if you don’t believe me you can bring over a six-pack of Stuttgarter Hof pilsner (it was my favorite when I was stationed there) and we can drink it while I dig around my Army stuff drawer for my NATO medal. And if you believe in NATO, not just the concept but the warfighting force, then you must demand that its members pick up the slack today instead of reissuing the same vague promises to do better someday that never comes. They used to get away with that until Donald Trump beat Felonia Milhous von Pantsuit. But the fact is our allies’ refusal to spend on defense has resulted in their general combat ineffectiveness. German Bundeswehr battalions have shown up to training with broomsticks – really, that’s a thing. That’s unacceptable, meaning we cannot accept it.

If you believe in NATO, you must also seek to maintain the critical support for NATO among the American people. You cannot do that shrugging your shoulders as our allies get over on us. The argument that NATO is both so essential that we Normal Americans must sacrifice lives and dollars for it, yet also that we must excuse the very people who are being protected from pulling their weight is an untenable political position. It makes no sense to Normal Americans (or to their avatar, Donald Trump), but for some reason the foreign policy establishment is totally OK with this bizarre conundrum.

Tucker Carlson, a voice of reason in a wilderness of hacks intent on shoring up the edifice of a 70-year old world order no matter how much it costs the United States, famously asked a guest, “Why should my son die for Montenegro?” Now, I have an answer (I served – under NATO – in the Balkans), but the point is not the answer. The point is the question – Tucker got heaps of grief for even daring to ask it. But it’s hard to imagine a more important or legit question for an American citizen to ask. It demands a straightforward and clear answer, not the furious condescension and abuse it received. How can we expect any American citizen to die, or to send their children to die, yet be told he or she has no right to even inquire as to why?

But the establishment is so flabby and so frightened that it cannot frame a coherent and compelling answer (again, I can, and in terms an 11B infantryman would appreciate), so the elite seeks to simply shut down the argument.

“How dare you even ask that, you NATO-hating peon! I won’t dignify your question about how this arrangement benefits America with an answer. Now write your check to the Treasury and give me your kid and don’t worry your hooded little heads about these questions!”

Sound familiar? It’s similar to the establishment’s response to our cries for help in the face of unequal trade arrangements:

“How dare you even ask why we should accept high tariffs against American goods while not imposing identical ones to defend our markets! I won’t dignify your question about how this benefits America with an answer! Now go learn coding, since your factory job just moved to Oaxaca.”

And it’s also a lot like the establishment’s response to our legit concerns about the effects of unrestricted legal and illegal immigration in terms of crime, jobs, and cultural disruption:

“How can you even ask why we allow so much immigration! Why, you’re clearly a racist and I won’t dignify your question about why all this immigration is a net benefit to actual Americans with an answer! And sorry about your kid getting shot by the gang member from El Salvador who the local cops had already arrested and released five times previously.”

Of course, the elite does not want an honest and open conversation about the basic premises it operates under, whether in terms of foreign or domestic policy. It understands that its policies are indefensible. They are indefensible because they are manifestly designed not for the benefit of Normal Americans – whose interests every US government policy should seek to serve first – but for the benefit of that same elite.

Donald Trump’s common-sense policy of putting America first appeals to Normal Americans for the simple reason that it corresponds to the proper purpose of the United States government – to protect and benefit Normal Americans. We are not seeking to harm our allies – the American graves that dot the European countryside prove our friendship better than mere words ever could – but neither will we tolerate being exploited, no matter how uncomfortable it will be for our foreign policy hacks to explain that to their Eurobuddies over champagne in Brussels.