The Elite Never Takes Your Side

Kurt Schlichter
|
Posted: Jun 14, 2018 12:01 AM
Share   Tweet
The opinions expressed by columnists are their own and do not necessarily represent the views of Townhall.com. 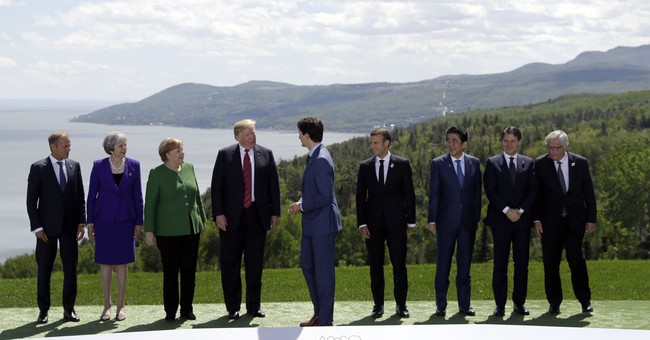 I guess I should just be quiet and let the liberal establishment continue to attack President Trump for refusing to submit to the demands of a bunch of foreigners. As Napoleon warned, perhaps apocryphally but accurately, never interrupt your enemy when he is making a mistake. And it is crazy to think that the American people are going to punish a president who sides with them over that schnitzel-snarfing frau, Monsieur les Eyebrows, and the rest of the globalist twits.

Oh, and let’s not even get started on how they can’t help but manufacture reasons why Trump shouldn’t take a chance on avoiding a war that would lead to thousands of Normal American families burying sons and daughters. Yeah, shaking Rocket Man’s hand is pretty much Munich 2: The EnNorkening.

But I shouldn’t complain. It’s getting so the elite needs to register their activities as in-kind contributions to the Trump 2020 campaign.

Who thinks Normal Americans will be mad about Trump fulminating over how we are putting our cash and our blood on the line against Putin for the Europeans and they won’t even meet the piddly 2% defense spending level they promised? One of the elite’s favorite fallbacks is that demanding our allies carry their own rucksacks for once is totally playing into Vlad’s hands. How? Reasons. And because.

Putin is the all-purpose boogie man now, though the transnational liberal elite was perfectly happy to suck up to him until he became more useful as a pumped-up threat than as a cash cow. A half mil for a speech? Seems legit. Uranium One, anybody? Cool. Weird how the fussbudgets who were AWOL during the real Cold War don't seem upset about that stuff, only about stuff that involves taking America’s side.

Who does the elite side with?

I say we should side with ourselves. So does the president.

I keep asking the establishment shills why America has some moral obligation to tolerate foreign countries imposing higher tariffs upon us than we impose upon them. Seems facially unfair, right? So, there’s got to be a really good reason because how can you support our working people facing a higher obstacle to trade than the foreigners do? I’m just wondering what’s wrong with a level playing field. Fair is fair, right? But I never get a good answer.

Oh, I do get responses. Most of them are weakly snarky tweets informing me that I don't know anything about economics. The rest are a smorgasbord of puny personal attacks. But no one can seem to tell me why we have some sort of moral duty to engage in trade relationships with other countries that are not precisely equal. Maybe I am an idiot like they say, but calling me one doesn’t answer the question.

I don't like tariffs. I like free trade. But in what world is free trade free when we are only free to face higher tariffs than our competitor countries? Apparently, in the world of the liberal transnational globalist elite. They are citizens of the world, you know.

I’m a citizen of the United States. How about you?

And I thought collusion with foreign leaders to influence American policy was wrong. Yet all I see are liberals, their Fredocon travelers, and their media minions commiserating with outsiders, with foreigners, against the guy who Normal Americans elected as the president. Collusion, if you will, to change American policy to what foreigners want. Gosh, it's almost as if all this talk about collusion was a bunch of baloney from the word go.

No wonder the Normals are getting militant.

When your job gets shipped to Oaxaca so somebody who looks like Mitt Romney can import the products you used to make back into the USA, don’t look to the elite to care. Care? They’ll applaud.

They are seeking to ensure their own gravy train doesn't get derailed. This is why they tell you, in between informing you how stupid you are, that there are only a few tariffs out there and they don't matter. Well, they sure as heck don't matter to these think tank jockeys and media scribblers. They are not the guys getting up at 4 a.m. to milk the cows or to harvest the soybeans the tariffs target. They've never worked on a vehicle assembly line in their lives, so what’s it matter to them if Germany’s tariff on US cars is four times ours to theirs? Of course, the tariffs on US products don't matter to the elite. They aren’t the guys who lose their jobs when their company picks up and moves to Vietnam.

I don’t like tariffs. I’d tear them all down, everywhere, just like Trump proposed. But the elite isn’t for that. It’s only against tariffs we impose to retaliate for the tariffs the foreigners impose.

And the elite are now apparently against peace talks, but they aren’t the ones who would fight the war Donald Trump is trying to prevent in North Korea. Turns out peace talks have been terrible since January 2017. Who knew?

Donald Trump is a disruptor. He is disrupting the fat, arrogant, and corrupt elite and the web of self-dealing it has spun over the last seven decades. Is Trump putting at risk everything that's been built in the last 70 years? I sure hope so. Because the system that was built over the last 70 years is no longer working for all of us. It's working really well for a few of us, but that's just not enough anymore.

We’re woke. We’re militant. And the tan, tweeting reckoning that is Donald Trump is at hand.