Top Conservative Predictions For The Rest Of 2017

Kurt Schlichter
|
Posted: Nov 30, 2017 12:01 AM
Share   Tweet
The opinions expressed by columnists are their own and do not necessarily represent the views of Townhall.com. 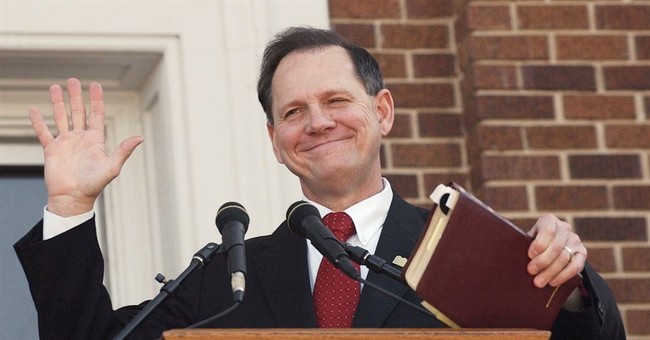 Any goofy pundit can make annual predictions at the New Year and then escape accountability for his foresight failures because everyone forgets them, but the real challenge is making predictions right after Thanksgiving for the rest of the year. That’s living on the edge. And in an era when things change on a dime – Trump tweeted! Democrat got handsy! Idiots are kneeling again! – a month can seem like a year.

So, Democrats, since months seem like years to you these days, that means we have over 37 years of President Donald J. Trump left, plus another 48 more years after he crushes Crusty Commie Bernie or Her Chardonnayness in 2020. Go on, Felonia Milhous von Pantsuit, drink up.

Anyway, here are my predictions for the rest of 2017!

With the defenders of Bob Menendez, Al Franken, and John Conyers all doing the “Hey, sure, sexual abuse is bad, but let’s not get kooky about it, and also all the women, who we should totally believe, are all lying or delusional” thing, what do you think the people of Alabama are going to do? What do you think their thought process will be?

“Gee, I guess we’re morally obligated to send a super liberal Democrat who sees a crosshair where we see a baby to Washington to join the pervs the Democrats are fine with because they are liberal even though the evidence – via WaPo and Gloria Allred – seems to get sketchier by the day. Oh, and we totally want to make Mitch McConnell happy.”

Moore’s totally going to win, but the more interesting question is whether the Democrats, the GOPe, and the mainstream media will take a personal inventory and think about their role in electing Roy Moore.

THE DEMOCRATS, THE GOPe, AND THE MAINSTREAM MEDIA WILL NOT TAKE A PERSONAL INVENTORY AND THINK ABOUT THEIR ROLE IN ELECTING ROY MOORE. (Confidence Factor: 95%)

Nah, it’s much easier, and so much more self-satisfying, for urban elites to pretend that the people of Alabama are a bunch of pro-pedo freaks than to consider that they actually don’t believe the charges, in large part because they don’t trust their establishment and media betters. Oh, and it’s easier to pretend that Alabamians don’t see the incredible hypocrisy being rubbed in their face by people who protect their admittedly guilty establishment fellow travelers while demanding that these red staters submit to years of representation by an ardent leftist based on hotly disputed claims.

TAX REFORM WILL DIE IN THE SENATE (Confidence Factor: 70%)

There’s no way the McCain-Collins-Corker-Flake Axis of Obnoxious is going to allow Trump his long-sought victory. These bitter losers will let it get right up to the edge of passage, and then run to find a microphone and shovel up a load of horse hockey about why, as True Conservatives™, they can’t possibly support this conservative reform. They are petty, selfish, and obnoxious, which is why they are the media’s go-to Republicans and Chuck Schumer’s not-so-secret weapon. If you don’t think they would eagerly shaft millions and millions of Americans just to try and mess with Trump, I would sell you a bridge, except no bridge is going to get built because they will block the infrastructure bill too.

On the upside, as a blue state lawyer, I’m going to save tens of thousands thanks to these idiots’ showboating while their constituents keep getting socked in the gut. Way to go, jerks.

Who said this is a “do nothing” Congress? Well, we’re certain to see them move heaven and earth to keep people who shouldn’t even be here here. And their immediate families. And their extended families. And everyone who ever met a member of their extended families. Because letting illegal aliens not just stay but giving them citizenship so they can vote for liberal Democrats, and paving the way for millions of other people to chain migrate in with them and also get citizenship so they can vote for liberal Democrats too, is totally absolutely what the Republican base sent its elected representatives to Congress to do.

But don’t worry, the GOP knows how to make deals. It will totally get some cool concessions in return, like the promise to maybe possibly think about perhaps asking politely that people not come here illegally anymore, unless they really want to, in which case we will give them all food stamps and a new Buick and citizenship so they can vote for liberal Democrats.

BEN SASSE WILL UTTER SOME HACK CLICHÉ AS HE VIRTUE SIGNALS ABOUT SOMETHING (Confidence Factor: 95%)

Sasse will vote for tax reform only because he has to run again in Nebraska, but that won’t stop him from mouthing off with his “more in sorrow than in anger” act whenever a conservative actually fights back. Not rolling over is unseemly, doncha know. Mocking a liberal who faked being an Indian to score a job? Oh, well, I never!

There’s no real question about whether he’ll do it – the only question is which shopworn chestnut he’ll offer up in his never-ending quest to be the most tiresome Republican in the Senate’s Fussy Fredocon Caucus. Will it be, “We’re better than this?” How about the classic, “If this is what conservatism is, count me out?” Or that old favorite, “I prefer to stand on my principles, even if it means losing?”

SOME AMBIGOUS OCCURRENCE WILL BE TAKEN AS PROOF POSITIVE MUELLER IS ABOUT TO ARREST EVERYONE IN THE WHITE HOUSE BUT THEN NOTHING WILL HAPPEN (Confidence Factor: 70%)

Recently, General Flynn’s lawyers allegedly ending the mutual defense agreement with other lawyers was seen as Flynn “cooperating” with Mueller. And…nothing. Russian collusion has morphed into a Turkish movie deal. Next, some other tea leaf is going to get read as proof of the Trumpocalyse and…nothing. See, there’s this giant problem that all the lunatics who are certain Trump is a hop, skip, and a jump from being put in shackles by the Grand Marshall of the FISA Court: He didn’t collude with the Russians.

THE MEDIA WILL START RUNNING THINK PIECES ON HOW A LITTLE GROPING DOESN’T MEAN YOU AREN’T A FEMINST (Confidence Factor: 77%)

We’ll soon be seeing articles and columns in the press about how this whole sexual abuse fuss is getting out of hand. After all, it was supposed to be a tool to destroy conservatives, but then it got out of hand and people started applying those standards to liberals. Well, we did warn them about how they were going to hate the new rules.

No, this can’t go on. Soon the media mavens will start showing a renewed appreciation for due process, and a concern about what they will call the “witch hunt” nature of the sex abuse revelations. Of course, there really are witches here – liberal witches who can’t seem to keep their wands under wraps. But this whole accountability fad is starting to get painful. Watch the establishment announce it has gone too far and that we need to step back and rethink it – so they can get back to groping as usual.

TRUMP WILL TWEET ABOUT SOMETHING AND THE LIBERALS AND WUSSY NEVER TRUMPERS WILL FREAK OUT AND WE CONSERVATIVES WILL LAUGH HYSTERICALLY (Confidence Factor: 100%)

I mean some freakoutrage besides Pocahantasgate. While the libs and Never Trumpers were wetting their collective collectivist selves, we normals were rolling and those awesome Navajo Code Talkers were totally thinking, “I was at freakin’ Iwo Jima – I think I can handle a joke.”

Yeah, that prediction was almost too easy.