Brace Yourself for Four Years of Nonstop Freakoutrage

Kurt Schlichter
|
Posted: Nov 21, 2016 12:01 AM
Share   Tweet
The opinions expressed by columnists are their own and do not necessarily represent the views of Townhall.com. 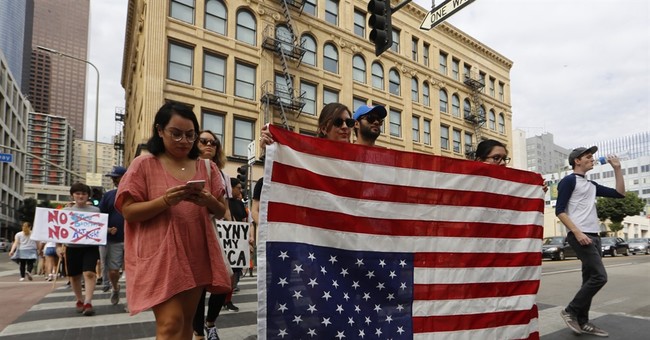 The left is trying to come to grips with its utter rejection, and its response to Donald Trump will be to fall back on an endless series of freakoutrages – hyperbolic, unhinged, hack media-fueled spasms of faux moral panic every time he dares do anything.

Appoint someone to a job? Freak out – it’s an outrage!

Go to dinner? Freak out – it’s an outrage!

Actually keep promises made to the voters? Freak out – it’s an outrage!

But it isn’t going to work. Not anymore. Not with the form of the Destructor Hillary and the rest of super smart Team Smugfail chose. Freakoutrage fatigue is in effect. You can cry Wolf Blitzer all day long and nobody cares.

It’s important to understand why liberals are so angry and so scared. They are angry because they believe they have a moral right to command us, apparently bestowed by Gaia or #Science or having gone to Yale, and we are irredeemably deplorable for not submitting to their benevolent dictatorship.

They are scared because they fear we will wage the same kind of campaign of petty (and not so petty) oppression, intimidation, and bullying that they intended to wage upon us.

And their fear tastes like sunshine puked up by a unicorn.

I was considering being magnanimous in our total victory, but that lasted until a bunch of loving, tolerant, peaceful anti-Trump demonstrators jumped my friend and hurt his dog. So now, their pain is my sugar, and I say let’s spend the next four years having our coffee Sudden Impact-style.

You want to play the freakoutrage card? Go ahead, make my day.

It’s the only practical tool they have left, secession being hard and scary when you’re on the side that wets itself around guns. So instead they sow cultural chaos with the eager, slobbering cooperation of the dying mainstream media. Hence the nonstop series of post-defeat freakoutrages over each and every action undertaken by President-elect Trump – oh, I’m getting Matthewsian tingles down my leg just thinking of how much it hurts you libs to read those words!

But it’s a loser’s game. Freakoutraging is not a power move – it’s a sign of weakness. It’s weak because to work, it depends entirely on cooperation by us and by President-elect Trump – there’s that tingle again! We have to allow it to work. See, you libs can’t make us do anything because we control everything. The Reid Rule is in effect, players, and we’re going to beat down liberalism like a Nordic-Trak beats down Harry.

To work, the freakoutragee has to take the freakoutrage seriously – “Wow, I can’t imagine that anyone would call the Attorney General appointee a white supremacist Klan lover without a really good reason. I shall be wary of this ruffian!” But when you literally call everyone associated with Donald Trump a bigot, racist, sexist, Islamophobe, transphobe, and miscellaneousphobe – including, by extension, the nearly 50% of Americans who voted for him over Harridan McHarpy – then you lose your credibility. When you redefine “bigotry” to mean “I don’t like you,” you’ve deprived the word of its bite.

Non-political people are watching, and when no one goosesteps over to their houses to throw them into Jesus camp with all the other people whose ancestors didn’t hail from Dusseldorf, they’re going to figure out that your endless freakoutrages are all lies. When everybody’s terrible, nobody is. Especially when the people you say are terrible really aren’t.

Freakoutrage need the cooperation of President-elect Trump (Ohhhh, baby, I’m a-tinglin’ again!), and that’s another reason you’ll fail. Freakoutrage is really a way you and your media fluffers try to train conservative leaders. You try to teach the Republican leader that if he does anything you don’t approve of, you’ll scream and whine and then he’ll have to back down. It’s a means of control, like a shock collar. And this works on a lot of Republicans, or used to: “Oh no, the WaPo is angry! Quick, start #caring!”

But The Donald? Nope. You have no heat because he’s giving absolutely no damns.

Ditching the press to scarf a sirloin? WAAAAAA! Damns given: 0.

You’ll be freaking out and the President will be eating a taco bowl and kicking it old school with his hot immigrant wife like a boss, penning and phoning Obama’s miserable legacy into oblivion.

So libs, carry on with your freakoutrages. Please. Each one makes you weaker and us stronger. Everyone sees the truth behind your freakoutrage scam. Everyone sees the truth behind you. The audience of Hamilton didn't boo Pence. The cast didn’t lecture Pence. The audience booed us. The cast lectured us. You libs hate us. Hate, not merely dislike. Hate. Your dream is a country without us, just like I predicted in my new book.

So your freakoutraging did do us one solid – you helped remind us who our real enemy is. It’s you. And we know it because you dorky, safety-pinned, not moving-to-Canada-like-you-promised freakoutragers keep telling us so.