Liberals Try To Connect With Normal Americans And It Goes Poorly

Kurt Schlichter
|
Posted: Oct 19, 2017 12:01 AM
Share   Tweet
The opinions expressed by columnists are their own and do not necessarily represent the views of Townhall.com. 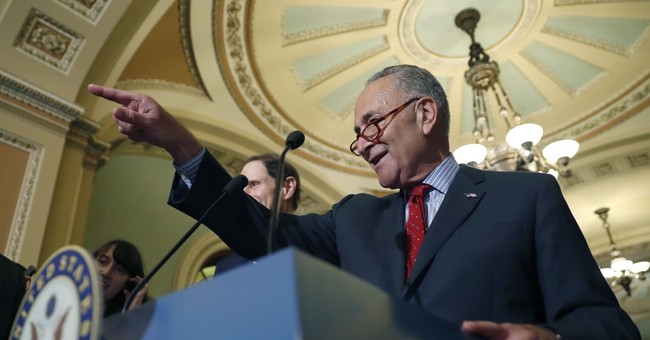 Editor's note: This column is satire.

Key Democrats met secretly to confer about the party’s future as America approached the one-year anniversary of their stunning and hilarious humiliation by Donald Trump. The key question they sought to answer: “How can we Democrats appeal to those Jesus-loving, racist idiots who hate science and don’t live on the coast like everyone we know?”

After opening the seminar by refusing to say the Pledge of Allegiance, Chuck Schumer gaveled the meeting to order, sparking widespread protests. “Hammers are violent tools of oppression that cause oppressed people to literally shake. We need a national conversation about assault gavels that use automatic high-capacity clips,” sputtered the 112 year-old Senator Dianne Feinstein. “Sure, we should be able to have them, but not those, those … little people out there. They don’t need gavels.”

The assembly quickly agreed that in 2018 Democrats must prioritize sensible hammer control, including gavel background checks and ending the tool show loophole, and to enlist Lawrence O’Donnell in their campaign to stop the hammering.

This vital issue settled, Schumer continued: “Remember, we’re here to freely exchange ideas in an atmosphere of openness and unlimited inquiry. With that in mind, your program has a list of the things you can’t say, like ‘illegal alien’ and ‘Christmas.’ It also has a handy cheat sheet of everyone’s preferred pronouns. Mine are ‘he’ and ‘him,’ while Senator Menendez’s are ‘convict’ and ‘Number 675973.’ Also, be sure to observe the rule about not mansplaining, which should not be a problem with this group.”

He then turned it over to 105 year-old Nancy Pelosi, who asked, “Where am I?”

After Schumer whispered in her ear, she began: “With the economy booming, the stock market setting records, and America defeating ISIS, things have never been worse. That’s why we need to keep The Resistance going, because it’s been a huge success so far in my district in San Francisco and, I’m sure, in your districts in Manhattan, Chicago, and Havana. And we need to expand our party, which means we need to convince dirty, stupid, transphobic normal Americans to come to grips with their own failings and join us.”

“We could tell them they’re stupid even more often,” suggested Al Franken.

“In my state, I can go potty with girls!” said California’s Gavin Newsom.

“Clearly, there’s something wrong with these people, so we need to consult with someone with a genuine connection with normal Americans,” Pelosi said. “Sadly, Hillary Clinton isn’t here to help us. If anyone connects with Middle America, it’s her. Unfortunately, she’s fallen and she can’t get up.” Pelosi made the “drinky drinky” gesture, and the crowd nodded.

“But we have someone almost as good, someone who knows how Americans feel, especially the women. Harvey, are you here?"

“Look, I know about how to reach regular Americans through the power of film, even though I may be having some problems caused by the vast right wing conspiracy, the NRA, and chicks who think they’re too good to play ball anymore," Weinstein said.

"I say we do a movie that really address some of the issues normal Americans care about, like global warming, or how much it costs to hire a team of top notch defense lawyers. Maybe we get Matt or Ben to star, and Woody or Roman to direct. And hire some actresses who know how the game is played,” he added, winking.

Schumer moved up and took the mic. “Thanks Harvey. We’re looking forward to having you back on top, so to speak, and writing checks. Okay, let’s hear from our next guest, a true hero whose courage and strength has been an inspiration to everyone, Mr. Colin Kaepernick.”

“Look, I’ll stand, I’ll totally stand. Just hire me, okay? Principles, schmiciples, I need money. I got a lifestyle to support. My girlfriend talked me into this kneeling thing and she just went out and bought a herd of yaks. Why did she buy yaks? You know how much a herd of yaks costs?” he said, eyes wide. Then he stepped down off the dais and ran over to Claire McCaskill’s table and began stuffing rolls into his pockets for later.

“Well, we have some other very special guests tonight who have done so much for us,” said Schumer. “These Republican friends have been a huge help. I especially want to thank John McCain for all he’s done on behalf of preserving Obamacare, and also for not taking things personally and joining up with those of us who spit on him after he returned from Vietnam while turning against the normal Americans who supported him. John, you’re a maverick we can always rely on!”

“Now look,” Schumer said, frustrated. “We have to defend 22 Senate seats next year, many in red states. How the hell are we going to do that?”

“Which one is left?” said Gavin Newsom, staring baffled at his raised hands.

“I know!” came a shrill, grating voice from the back of the room. Hillary Clinton entered with a bandage around her head and limping from the broken toe she got when she “slipped” while wearing her trademark high heels. She took the mic and the room fell still.

“We can start treating normal Americans with respect. We can honor them for their hard work, patriotism, and devotion to family. We can stop insulting their religious beliefs and trying to shove our urban blue state values down their throats. When criminals murder fellow citizens, we can choose not to blame law-abiding gun owners, and instead of calling them ‘racists’ for voting for Trump, talk to them and learn why they felt he was offering them more than the Democratic Party.”

The room was silent, and the crowd sat staring with jaws slack.

“And…and…,” she said, then steadied herself on the podium, looking around confused.

“Are you all right, Madame Should-Be-President?” asked Schumer, handing her a goblet of Chardonnay. She drank it in one gulp.

“I don’t understand…what happened?” she asked.

“You were just mumbling random words, crazy talk,” Schumer said. “It didn’t make any sense at all.”

Joe Biden Proves Once Again Why He Isn't Fit to be President
Townhall
CBS reports breaking news about the Dems' 'Inflation Reduction Act' (Shocker: 'They waited to report this until after it passed')
Twitchy
Random Act of Journalism: Karine Jean-Pierre Gets Called 'Orwellian' During Interview
Redstate
Yes, They're Going to Arrest Donald Trump. Deal With It.
PJ Media