Hollywood is America’s Conscience or Something

Kurt Schlichter
|
Posted: Oct 09, 2017 12:01 AM
Share   Tweet
The opinions expressed by columnists are their own and do not necessarily represent the views of Townhall.com. 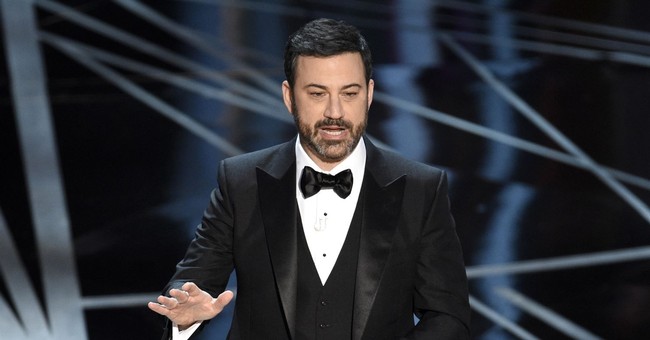 I am one conservative who is thankful for Hollywood’s collective inability not to say stupid things because I’m a columnist and these idiots are the gift that keeps on giving. Tired of writing about failing, fussy Fredocons and goose-stepping libs with a beef against the Bill of Rights? Well, like clockwork some genius will take to Twitter leveraging his GED and his supporting role as the sassy sidekick in a CW teen vampire dramedy to offer his super-insightful political/cultural insights to us normals and … BOOM! I have the launching pad for another sensational column.

And wow, have these Tinseltown twerps ever been stupid.

Let’s start with Jimmy Kimmel, the Johnny Carson of the semi-employable cargo shorts and Corona set. A few weeks ago he was weighing in on health care policy because, apparently, he’s for health care. Exactly what policy he’s for is unclear, because when Jimmy does his thing in front of the fin-slapping trained seal caucus in the studio bleachers, he’s not actually being about policy. He’s being about posing. He’s in favor of health care, damn it, and he doesn’t care whose toes he steps on when he speaks truth to power to all those awful people who are, well, against health care or something. Because conservatives hate health care, just like they hate science.

Is Jimmy the Wonk for single payer? He is if his BFF Chuck Schumer made that today’s talking point! But when the guys who brought you the DMV start bringing you your doctor, and you’re brushing off cobwebs in the waiting room, what are the odds that Jimmy Kimmel and his family are going to be sitting in there with you? If you think Jimmy’s going to get the same low-bidder government doctoring you and I will then I want a hit of whatever you’ve been prescribed. We saw a preview of single payer in the Obama VA. It was a total disaster until Trump fought to be able to fire the hacks over the Democrats’ objection, since the purpose of government healthcare is not to provide healthcare; it’s to provide jobs for unionized government workers. But that won’t be Jimmy’s problem. It’ll be ours.

After Las Vegas, Jimmy got up on his late night soapbox once again to act as Man Pelosi’s ventriloquist dummy and regurgitate Democrat talking points about gun control. According to him, and every other rebel nonconformist late night host, we normals are bad people since we will not immediately surrender our right to self-defense because someone who was not us murdered people. I guess none of his toadies mentioned to him that this is not a compelling argument.

Remember, the goal of politicizing a tragedy like Kimmel did is never to “start the conversation.” It’s to end the conversation by characterizing any rational counter-argument to their fascist schemes as immoral and silence all opposition so the left can push through its agenda without the need to actually formulate an argument as to how the proposed rescission of our rights might solve the problem. But, having become woke, we normals just won’t cooperate anymore with the media narrative – we insist on resisting, thereby proving that we are all just like Hitler plus Pol Pot plus Nickelback.

These Hollywood posers’ best acting is when they are lying to our faces. Anyone want to take a bet that Kimmel’s family isn’t surrounded by bodyguards packing the same kind of heat he wants to strip from us? No? But Chet the Unicorn says there’s no way a Hollywood hero could possibly be such a hypocrite!

Make no mistake – Jimmy and his ilk don’t hold the moral high ground. They aren’t even on the map. Like a lot of normals, I have a Humanitarian Service Medal somewhere in my closet that I got for actually helping folks, and I did some other stuff too. Where was Jimmy when it was time to do, not talk? None of us need to be lectured to on #caring about other Americans by a guy best known for hosting pneumatic bimbos bouncing on a trampoline.

While we’re on the subject of these Hollywood hacks’ bizarre sense of entitlement to judge us, there’s Brie Larson, a starlet who apparently won an award on an awards show I didn’t watch for a movie I didn’t see. The fancy cheese-monikered ingénue, who shares the same kind of muted, generic, non-threatening white girl prettiness of fellow half-wit Jennifer Lawrence, recently tweeted this masterpiece of the genre:

I merely smiled at a TSA agent and he asked for my phone number. To live life as a woman is to live life on the defense.

Wow. I’m in awe. That’s the ultimate encapsulation of Liberal Feminism for Dummies that you see spouted by the likes of Lena Dunham when her maw isn’t full of muffins. To paraphrase Ash the robot in Alien, “Its structural perfection is matched only by its presumption and stupidity.”

Where to begin? Is it the underlying pulsating indignation that someone she perceived as a low-status worker dared to think that he could address Her Majesty? She bequeathed a smile upon him – you call that uppityness gratitude?

And then there is her playing not merely the victim card but the whole silly deck. “To live life as a woman is to live life on the defense?” Whoa. She had to be smiling proudly as she typed that line – one of the classics of the “Things people say that they think sound smart but are tragically dumb” form. You just know she’s never spared a moment thinking of what her sisters in Saudi Arabia or Afghanistan endure. Instead, this dizzy phony takes someone being nice to her and turns it into her own personal acid splash.

Yeah, Brie is the real hero – where’s her parade?

Anyway, Hillary donor Harvey Weinstein is now promising his liberal pals to redeem himself by taking on the NRA. Better make sure whoever tends the plants at the NRA’s offices is ready for a biohazard.

The revelations of Hillary donor Harvey Weinstein are only revelations to us normals; everyone in Hollywood knew about Hillary donor Harvey Weinstein’s perversions. But then, they knew about Blue Dress Bill Clinton’s perversions too – apparently all these big name liberals share both a contempt for women and incredibly bad aim.

I guess we should all be glad that Hillary donor Harvey Weinstein doesn’t like cigars. Regardless, the Hollywood crowd could have shown a little courage and kept other women from being victimized. But they didn’t. Yeah, Ashley the Uberfeminist sure was brave speaking out post-November against the guy who didn’t molest her and couldn’t harm her running-on-fumes career.

I am woman, hear me not roar, because I calculated it’s to my career advantage not to roar even if it means sacrificing some sisters along the way.

The hell with Hollywood. It’s all lies, it’s all a pose, it’s all a scam, and we aren’t falling for it. But at least for the first time in a long time, Kimmel and his Tinseltown pals have us laughing again. Just not why they’d hoped.