Why Should We Trust Mueller?

Kurt Schlichter
|
Posted: Jun 15, 2017 12:02 AM
Share   Tweet
The opinions expressed by columnists are their own and do not necessarily represent the views of Townhall.com. 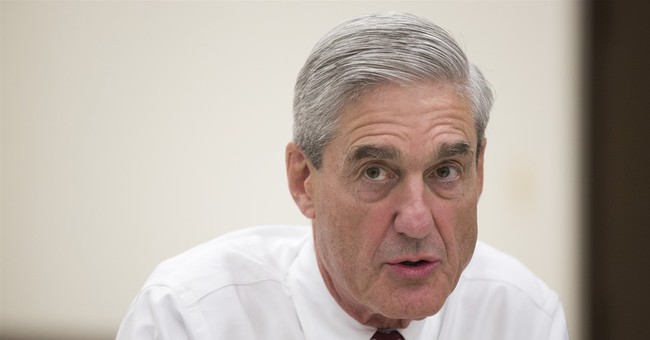 What really stinks is that Robert Mueller may very well be as squared away as people say he is, and it doesn’t matter. The guy is a Purple Heart, Bronze Star Marine, and not a soldier-trashing fraud like John Kerry either. He’s served his country and may be trying to do it again in the context of a fake scandal that has degenerated from “Trump made a pact with Putin BECAUSE TREASON!” to “Trump almost made Comey cry BECAUSE OBSTRUCTION!”

All that’s left of Felonia von Pantsuit’s original lie, created to ease the searing pain of her utter rejection, is the establishment’s wishcasting that Trump somehow obstructed an investigation of nothing.

Regardless, I don’t want to be cynical, though bitter experience compels it. I hope Mueller is as honest as people keep saying he is. I hope he has the integrity people keep telling me he has. I hope that not everyone who has ever held a position of responsibility within the Beltway is an establishment agenda-driven hack trying to squelch Trump and the voices of all those peons who voted for him.

The establishment demands our trust, so it bears the burden of proving this isn’t just another scam. What, exactly, is the evidence that the fix is not already in, that no matter what, Robert Mueller isn’t going to come out with some bunch of nonsense and innuendo that will give the impeachment-addict Democrats and the puff-boy Republicans, who don’t really want to drain the swamp they prosper in, the green light to go along with the soft coup the establishment’s been dreaming of?

Why should we believe this isn’t rigged? Because people in D.C. promise us that “Hey, this guy is honest?”

I guess we’re supposed to think “Yeah, well this time they’ve got to be telling us the truth. They’re totally due.”

But here’s the problem – we now have lots of new facts that change the original picture of our esteemed special counsel. Yes, as the Democrat steno pool that is the media has pointed out as we got woke to what’s happening, a lot of conservatives (including me) were initially satisfied with Mueller when he was appointed to investigate the Trump/Russia connection that everyone now admits doesn’t exist. But then came some troubling revelations which – whoa! – made us re-evaluate our prior understanding. So we – brace yourselves! – changed our minds in the face of new evidence.

Let’s look at all of the evidence. Mueller seems like a good guy. War hero. No scandals as FBI director. Not a known scumbag or skeevy perv. In Washington terms, the last one alone puts him miles ahead of the competition.

But now we find out that he’s Leaky Jim Comey’s bestest buddy there ever was. These guys are pals, and now Mueller is going to investigate the dude who fired his amigo? Does that seem cool to you?

If the HR Department at work is investigating you, do they pick as the lead investigator the guy you go drink Budweiser with? Sure they do, unless Chet the Unicorn is free, because the only thing more unlikely than picking a key player in the investigation’s friend to do it is picking a damn unicorn to do it.

So, Jim Comey – whose hurt feelings seem to be the only thing left of this Schumer-show of a scandal – is the key guy in the pseudo-scandal, and he’s got a motive to shaft the president, yet his friend is investigating it and somehow that’s supposed to be A-OK?

Didn’t Comey admit that he leaked info after getting fired in order to get a special counsel appointed? And didn’t Comey say he’s been meeting with Mueller and they’ve been chatting it up secretly? Did Mueller read him his rights? Why not?

And Comey says Mueller is awesome. So do the Democrats. I’m feeling pretty confident this isn’t rigged. What do you think, Chet the Unicorn?

What’s that, Chet? You have your doubts? Bad, wicked, cynical unicorn, listening to fake news!

Oh, and it gets better. My intrepid fellow Townhall columnist and friend Derek Hunter dug up the fact that Mueller did exactly the same thing as Trump is accused of doing with regard to the Waco massacre. Of course, in the case, such as it is, of Flynn, no one barbecued any children.

Hey, if someone accuses me of a bogus non-crime (because what Honest Jim says Trump did is not remotely a crime), can Derek investigate me? If not, why not?

But let’s put aside that the pal of a potential perjurer is heading the investigation of something he himself did. Let’s look closer. Hey, who’s helping Mueller out? I bet it’s another bunch of pros with no agenda we can put our confidence in because elite insiders are incorruptible.

Well, Mueller’s hiring some folks and their donation histories are on that helpful Federal Election Commission web site. Now guess what they are.

Well, luckily there’s so little partisanship these days that this makes no difference, say the people who support their party. After all, these are public servants of impeccable integrity and stuff who won’t let party get in the way of blah blah blah blah blah blah.

Let me offer you a complete list of non-conservatives who have stood up against this fascist witch hunt and the Deliverance-esque canoe trip that liberals are taking with the concept of justice:

Hmmm. Nope, neither one of them is on the Mueller Team. What’s up with that?

Mueller needs to resign – that’s what a guy with unimpeachable integrity does when he realizes his personal relationships give the appearance of impropriety. It’s also what someone who conforms to the applicable regulation does. That regulation is 28 CFR 45.2, and it says that Justice Department employees cannot participate in a “criminal investigation or prosecution if he has a personal or political relationship with …Any person or organization substantially involved in the conduct that is the subject of the investigation or prosecution.”

I hope this is merely the appearance of impropriety, though that is enough to trigger the regulation, and that this isn’t just another Deep State scam designed to subjugate forever the half of the country that, in desperation, sent Donald Trump to Washington to try and break the establishment’s death grip on power. Because if this is a scam, we’re going to know it, and if they try to cancel out our votes what follows is going to make my recent novel’s dystopian vision of America torn apart look like Happy Bunny Meets Fluffy Puppy at the Hugging Factory.

Mueller’s simply got to go, because there’s simply no way they can satisfactorily answer the question, “Why should we trust Robert Mueller?”

I don’t know him. You probably don’t know him. All we know is he was a heroic Marine, which is a plus, and which is frankly my only source of hope that he’s not just another loathsome establishment tapeworm.

But he is also a Washington insider, one who just happens to be besties with the guy his crew of freaking Democrat donors would be fitting for an orange jumpsuit if this wasn’t just another establishment okey doke.

Worst of all, the media hacks and politicians tell us we have to trust him. That’s pretty close to case closed right there.

Here’s the conundrum. If Mueller is honest, he quits because of his massive conflict of interest, and we lose an honest investigator. And if he doesn’t quit, we know the fix is in.