Trump Won’t Be Punked By Foreign Dirtbags Like Obama Was

Kurt Schlichter
|
Posted: Apr 17, 2017 12:01 AM
Share   Tweet
The opinions expressed by columnists are their own and do not necessarily represent the views of Townhall.com. 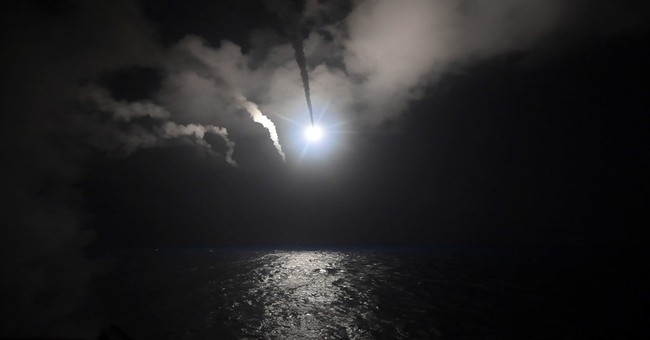 After eight years of Barack Obama’s pathetic fecklessness, America has got its feck back.

And the whiny progressives who prefer our woman-enslaving, gay-tossing, toddler-crucifying enemies to the guy who beat their designated heir to the Crown (Royal) are in a tizzy.

Oh no, America is refusing to continue down the path of submission, humiliation, and utter failure blazed by President Faily McWorsethancarter!

Heavens, we can’t have our enemies respecting us, much less fearing us!

Gosh, we can’t have America re-assuming its rightful place in the world – after all, weren’t we taught that the United States is the root of all evil by our pony-tailed TAs at Fussboy U?

In fact, Donald Trump is in the process of doing what Barack Obama never did and what he and his coterie of pompous twits and political hacks masquerading as a foreign policy brain trust could never do. Trump is establishing a successful foreign policy doctrine. It’s not precisely old school Republican doctrine. It’s also not the activist Bush Doctrine, which is often labeled “neo-con” by people who think “cuck” is a sick burn.

Trump’s policy is “America First.” Obama’s policy was “Blame America First.” Obama employed force only after extensive agonizing and never in the amount required to actually win. The Obama Doctrine was about staving off defeat just long enough so the next sucker would get stuck dealing with the resulting mess while The Lightbringer chills doing who knows what sans spouse in the South Pacific as Bill Ayers types up his memoirs for him.

Obama treated our allies like dirt, and he didn’t just embolden our enemies. He paid them - literally - with pallet loads of cash. Of course our enemies stopped fearing us. To the extent Putin diddled with our election by exposing the depths of Democrat corruption, it’s because he wasn’t afraid of that posing, prancing puffboy in the White House.

Putin’s rethinking his play now, as are those Seventh Century cultists in Tehran and that bloated bratwurst in Pyongyang. They all saw Obama for what he was – a preachy wuss without the stones for a fight, adhering to the motto “Make Love, not war.”

Trump though? “We don’t understand what they’re going to do in Syria, and not only there,” pouted some Putin puppet. Good. When you’re acting like the most dangerous guy in the room, everyone else thinks twice about making any sudden moves. Be careful, because Trump might just kick your Harry Reid.

There’s been a lot of talk about how Trump is “changing his policies” and “flip-flopping.” The mainstream media is desperate for a “Trump Fails!” narrative that might stick, and “Trump Betrays His Supporters By Fighting America’s Enemies!” is as good as any.

Baloney. These prissy pundits don’t get the essential nature of either Donald Trump or the American people. They confuse Trump’s critique of establishment foreign policy – one that resonated with the Americans our fey elite asks to carry the burden of their interventionist shenanigans – with pure isolationism and even pacifism. It is nothing of the sort. Americans are sick of their lives and treasure being squandered by dithering milquetoasts who tie our troops’ hands and won’t do what’s necessary because they can’t get it through their pointy heads that if it’s important enough to fight a war, then we damn well ought to win it.

Putting America’s interests first does not mean putting our heads in the sand. Americans know these savages need killing, and they happy to oblige. Army General George S. Patton understood this essential truth: “Americans love to fight.... Americans love a winner and will not tolerate a loser. Americans play to win all the time. That's why Americans have never lost and will never lose a war. The very thought of losing is hateful to Americans.”

Congratulations Washington, you managed to disprove Patton on one point. We haven’t won a ground war since Desert Storm in 1991, and we won that because we found the enemy, we fixed them in position, and we killed those bastards until they begged for mercy. Then we came home. That’s the lesson, and Trump seems to get it. What Americans are tired of is having their sons and daughters coming home in bags because D.C. hand-wringers were butch enough to start a fight, but not men enough to finish it.

Trump gets that we can’t fix Syria, and he has zero intention of dropping in tens of thousands of America’s sons and daughters to teach its inhabitants to play nice. But spraying sarin on little kids crossed the line, morally and strategically. Assad didn’t have to use it; he chose to, and he chose to because he thought he could rub Trump’s nose in America’s impotence the way he had done to Sissy O’Redline.

Trump came under fire from platoons of Eames chair generals and hipster blogtroopers sharing the strategic savvy they earned fetching a thousand lattes. Most of them have never thrown or taken a punch, and they didn’t understand that the only way to stop a bully is with a haymaker to the jaw. Trump’s message was loud and clear, and not just to that little creep cowering in Damascus. Everyone saw what happens when you get in Trump’s face, and how fast the fists flew. And just wait until they see our 350-ship Navy.

Trump’s Tomahawk strike was a tactical and strategic success. Tactically, it bashed a decent chunk of Bashar’s air force. Strategically, it gave dictators and thugs pause – and the limited nature of the response kept us from being sucked into another quagmire in which our magnificent warriors’ sacrifice and success would be squandered by subsequent Democrats a la Vietnam and Iraq. Plus it demonstrated that the key processes for executing American foreign policy are in place and operating again. The Trump Team understands that firmness and focus saves lives by deterring our enemies.

The MOAB strike was vintage Trump. Typical Obama – we had a weapon system that American forces needed, but the military probably didn’t even bother asking to use it. With Trump, they don’t have to ask. Here’s Trump’s order: “Win.”

Trump meets with the Chinese leader and a week later the Chi-Coms are leaning on the Norks. Yet the clueless media is whining that suddenly Trump’s altered some of his positions on trade issues, missing the connection entirely. But in the media’s defense, it has been eight years since Americans walked out of a negotiation having kept their pants.

The mouth-breathing media tells us Trump has done a 180 degree turn on NATO. Nonsense. Trump, like most Americans, rejects the “You hate NATO, you NATO-hating knuckle draggers!” shrieks from the establishment every time some patriot wonders why the Europeans were, for the most part, not pulling their weight in their own defense. Trump simply told them that we are done shrugging and covering the cash shortfalls while they take money that they promised would be going to guns and give it to rape-focused refugees. That’s not at all unreasonable and, as someone who supports NATO and who wears a NATO medal, some real talk was long overdue and necessary to sustain this critical alliance. NATO’s “friends,” by using cheap invective to shield it from legitimate criticism, imperiled its support among the American people. To save NATO, we must fix NATO. That will happen. Word is out that Rick Grenell is likely to be named the NATO ambassador; that would be another terrific addition in the President’s emerging all-star national security team.

In response, the desperate Democrats are trying to play tough, and it’s adorable. They hate it when a Republican stands up for America’s interests over those of foreigners abroad almost as much as when one stands up for normal Americans here at home (If Hillary had won, we may well have seen the same peace and love here as they created in Libya). That’s why the Russian nonsense was so hysterical. Watching Democrats pretend to oppose the Russkies is the fakest fake since Meg Ryan faked it in When Harry Met Sally.

Trump is playing tough with our actual enemies. The only enemies that Obama’s national security hacks like Susan “The Video Did It!” Rice and failed young adult romance novelist Ben Rhodes were ever interested in defeating were Obama’s political enemies. We eagerly await the Netflix miniseries that tells their story, Orange is the New Pinko.

It’s again clear that if you are thinking about getting uppity with the U.S. of A, you are rolling the dice. Of course, the liberals whine, which is good because the volume of their yelps is a terrific metric for success. The more they cry about it, the better an idea it is. May they weep long and hard, because America has got its feck back.