Kurt Schlichter
|
Posted: Mar 06, 2017 12:01 AM
Share   Tweet
The opinions expressed by columnists are their own and do not necessarily represent the views of Townhall.com. 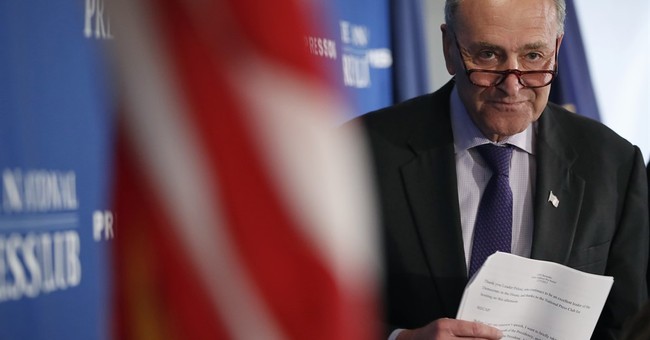 Suddenly the Democrats are coming out against their classic moves like cavorting with Russians to hack American elections and perjury (like you need a link), so who knows which of their foundational principles they will pull a 180 on and betray next: Climate scams? Free money for deadbeats? Jane Fonda?

But they don’t really mean it – hell, without perjury they could never testify to anything. If you want to know what the liberals are up to, just listen to the lies they are telling about conservatives. They used to be able to get away with it too, but thanks to the interwebs Al Gore invented between buffet deep dives and sweaty masseuse gropes, the political playing field for liberal liars is now covered in rakes.

Lying is what they do because that’s all they have left on the left. They have no foundational principles except power. Their entire ideology is transactional – it’s not based on ideas but on payoffs to Democrat sub-sets. Here’s some dough for the baby crunching industry! We’ll hassle some Christian bakers for the SJWs! Let’s put a bunch of cis-het males of pallor who don’t even listen to NPR out of work in West Tennetucky, or wherever they grow coal, to delight our global warming cultist pals!

But today the Democrats hold no levers of power, and they can’t dispense goodies anymore. All they can do now is howl, whine, and lie, and try to mobilize the parasites burrowed into the federal bureaucracy to undercut the will of normal Americans. They do this by falsely accusing us and those who represent us of doing exactly what they are doing and what they intend to do once Trump is ousted. Their goal is to seize power again and permanently disenfranchise us – and they are happy to take the risk of literally ripping the country apart.

The media is, of course, a willing and eager accomplice in this coordinated campaign of deception and slander. Notice how no one in the mainstream media pointed out how the Sessions perjury lie conveniently appeared simultaneously across the entire media just when the Democrats desperately needed to shift the narrative from their utter humiliation by Trump’s terrific joint address? The media hacks never mentioned it because they were part of it, the beat-boy skeletons to the David S. Pumpkins of progressivism. The left and its media’s problem, however, is that the new information reality means that they can start a controversy, but they can’t control it.

Here’s the utterly predictable pattern. Spazzy Dems freak out about some imagined atrocity by a conservative then, within a few hours, it becomes clear that the alleged offender did nothing wrong while conservatives scour the web and start showing how Democrat hacks are on record doing exactly the same thing times a zillion. That’s the key – the media can no longer guide the lie to destroy the target. The internet lets us have a say – and to grab the wheel.

Oh no, Jeff Sessions talked to a Russian then didn’t bring it up when not asked about it! Oh, we Democrats would never do that … except, thanks to us conservatives (and a President who’s willing to punch back twice as hard), here come the photos of Schumer and Ivan sharing a cup of Joe Stalin and here’s Pelosi’s partying with some Russkies after denying it and then the State Department turns out to have arranged it and FOR THE LOVE OF GAIA SOMEBODY SHUT DOWN THAT INTERNET MACHINE BECAUSE IT NEVER FORGETS!

Frankly, I don’t think Sessions should have dignified their nonsense by recusing himself. I think he should have strolled out before the cameras and said, “Hey Chuckie, I got a big, fat recusal for ya right here!”

We all kind of knew how the “Trump inspires anti-Semitic threats” meme was going to end up. Swedenpalloza was just a couple fake controversies ago and we all know how that went. Trump observes “Look at Sweden’s immigrant problem,” then the liberal media comes back with “Lies! Sweden is a herring-infused paradise of love and sharing!” at which point Sweden promptly gets on lit fire by Muslim refugees. All that’s missing was a woke, gender-fluid Viking wearing a “Flyktingar Välkommen” t-shirt blowing on a sad trombone.

Then Jewish Community Centers started getting threats and, of course, it had to be Trump supporters because fanatically pro-Israel people always threaten Jews or something. Facts, shmacts – the bogus narrative must be preserved! So Trump condemns this scummery, but also notes, “Sometimes it’s the reverse, to make people — or to make others — look bad.” Of course, the fake news media went nuts, because no hate crime has ever been a hoax except for almost all of them, so we conservatives settled down with our tea and waited for the ending we totally saw coming. And, of course – of course – as every non-Fredoriffic conservative predicted, the FBI busted the slug responsible for a bunch of the threats and it turned out to be …. wait for it!

Let’s see. Was it the conservative Trump supporter? Did he have a MAGA hat? Just like the media and the liberals would have you believe? Oh come on, we all knew it. Say it with me: “Leftist member of the media.”

Um, awkward! Hey, look on the bright side. At least this particular leftist member of the media didn’t murder anyone.

And, of course, there is the Trump the Authoritarian/Trump the New Hitler meme. Except Trump’s apparently not very good at authoritarianism, since no one seems to be being oppressed. He has a lot of policy ideas, which he openly explained to the American people in his speech, and which he will submit to Congress to be debated and voted upon before being enacted. That seems to correspond pretty closely to how I learned a bill becomes a law on Schoolhouse Rock.

Well, maybe his enforcing the duly enacted laws passed by Congress to deport illegal aliens counts as authoritarian Hitler stuff, except it seems odd that a leader who is doing what the people’s representatives passed into law instead of unilaterally deciding on his own not to do what the people’s representatives voted to do, and thereby effectively ruling by decree, is a hitlery authoritarian.

Obama unilaterally changed the immigration law by simply not enforcing it. That seems pretty undemocratic. He also seems to have tapped the communications of his political opponents and left some sleepers in the government dedicated to bringing down the new administration. Maybe I’m being fussy, but those seem super-undemocratic. Naturally, the mainstream media finds this all less disturbing than Kellyanne Conway’s Oval Office footwear.

Watch the liberals. Listen to what they say, because their lies and their slanders are a road map to their plans for the future. Straightforward from here, given the chance, they absolutely intend to impose the kind of quasi-fascist rule they falsely accuse Trump of contemplating. But their problem is that we now recognize their lies, and we see their endgame, and the collapse of the media gatekeepers means they can no longer keep us blind and isolated. So when they lie, we are going to throw their hypocrisy right back in their withered, pruny faces and there’s nothing they can do to shut us up. Sorry, you lying sacks of socialism, we’re not about to let you rip our country apart.