Hey, What If Trump Actually Wins?

Kurt Schlichter
|
Posted: Oct 31, 2016 12:01 AM
Share   Tweet
The opinions expressed by columnists are their own and do not necessarily represent the views of Townhall.com. 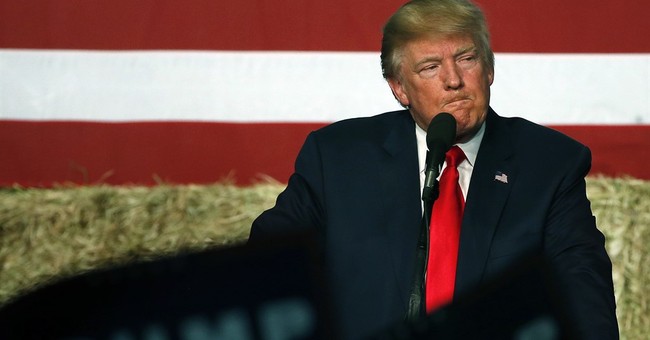 This is the greatest election ever was.

But now we face a prospect only slightly less terrifying than Hillary slithering back into the Oval Office. It’s President Donald J. Trump, the guy whose entire appeal is based upon the fact that we, astonishingly, could do worse.

This election isn’t over – the polls were already tightening as people decided that they could spot the GOP candidate a dozen free gropes if it meant they could avoid four years of Felonia von Pantsuit nagging them like some Article II-fueled first wife. But now FBI Director James Comey has found something on Weiner’s sticky laptop that is so astonishingly awful that even he had to jump off the cover-up express before it totally derailed.

You don’t drop this big of a deuce in the electoral punchbowl unless you know it’s so bad that it would flush what’s left of your reputation the moment your disgusted, embarrassed subordinates tried to redeem the FBI’s Clinton-smeared image by leaking it.

By the way, Comey is doing his part to help the limping Obama economy – he’s hiring a food taster and somebody to start his car.

Roll that around in your head for a minute.

If Trump wins, we are likely to keep the House as well as the Senate. Trump will no doubt decide to pick a Twitter fight with Paul Ryan, whose palm will be permanently attached to his face. On the upside, we can expect the Senate to be able to consider a Supreme Court nominee who doesn’t think the Constitution is unconstitutional.

Sure, there’s the whole filibuster thing, but Harry Reid has taken some time away from getting his corrupt tail kicked by random gym equipment to threaten to deploy the nuclear option to help Hillary get her way, so you know Trump is going to push to do that in order to pass his agenda. Of course, first he has to get an agenda.

One thing we know Trump is unlikely to do is get us involved in any new wars, which would be a nice change. We might stop diddling around the margins with ISIS and finally stamp out those 7th Century cockroaches once and for all. While Hillary seems fixated on proving her manhood to Putin, the nice thing about Trump is that our currently-emboldened enemies will be so freaked out by his unpredictability that they might decide not to make any sudden moves lest he nuke ‘em ‘til they glow. It’s about time we bring back Fear of America’s Wrath as a key element of national power.

Otherwise, beyond promising to MAGA, does anyone believe Trump has thought through the specifics? Normally a Republican president would look to the denizens of the network of conservative think tanks for policy ideas, but then, normally, the denizens of the network of conservative think tanks would not have spent the last 18 months trashing the Republican nominee, if not actively cozying up the Democrat. So expect the nerdy, bow-tied wonks who would normally be on the West Wing’s speed dial to be left waiting by their silent phones, lonely and sobbing. In this way, their empty professional lives will become indistinguishable from their empty personal lives.

And then there is the patronage. Normally, the D.C. Republican lifers would be slobbering for the chance to be appointed as Deputy Undersecretary of Agriculture for Cornhole Arbitration or Assistant to the Assistant Secretary of the Air Force for Buying Planes That Don’t Work and Dumping Ones That Actually Do. Some quality people will step up to serve their country despite their doubts about Trump, but the guys who would normally get the unseen but absolutely vital gigs in the Deep State aren’t in Trump’s Rolodex like they would have been for a President Marco or – shiver – President Jeb!. Instead, look for many of these jobs to get passed out to Trump sycophants, fanboys, and Twitter followers. Watch the Department of Energy to be committed to the steady, thoughtful stewardship of @TrumpH8sLibtards69.

The WaPo is going to have a field day looking into the background of these newcomers, having no doubt rediscovered its mission of holding the current administration accountable after eight years of eagerly tongue-bathing the Obama Regime.

In fact, the media, along with Hollywood, the civil service bureaucracy, and liberals in general, will completely spazz out. While their pain and agony are delicious, we need to understand that the next four years will be open warfare. We owe Hillary no respect or loyalty, and we will oppose her at every turn should America be stupid enough to elect her, so there is no reason to think the other side won’t treat a President Trump the same way. Whoever gets elected enters office perhaps mortally wounded, hated by half the population. And that’s bad.

Hillary is utterly unable to bring Americans together because she hates half of the country – not “dislikes” or “disdains,” but actively hates. She sees us – you know, patriots – as her enemies, which we are, and she will attempt to cause us harm at every turn. But Trump, despite the media lies, doesn’t seem to hate anyone, including liberals. Hell, until last year, he was a liberal. He has the chance to actually reach out, and the best way to reach out is to do nothing at all to unnecessarily outrage the other side. Now, outraging normals is the entirety of Hillary’s platform – she’s dumb and vindictive and thinks it’s smart to kick the hornet’s nest by trying to take our guns and ban our speech, thereby further dividing us while also proving me right. But Trump could focus on unity. He could avoid gratuitously disruptive fights with his opposition – there will be enough necessarily disruptive fights, like repealing the abomination that is Obamacare. He could choose to be a real leader.

Nah. In the off chance Trump wins, he’s almost certainly going to be terrible. But then, everyone (including me) said he could never get nominated, much less win. We might be surprised. Of course, it never hurts to hedge your bets, so buy ammo. Then raise a glass in a toast to Andrew Breitbart and his greatest victory.