Claims of Racism Are The Last Refuge Of A Shrill Harridan

Kurt Schlichter
|
Posted: Aug 29, 2016 12:01 AM
Share   Tweet
The opinions expressed by columnists are their own and do not necessarily represent the views of Townhall.com. 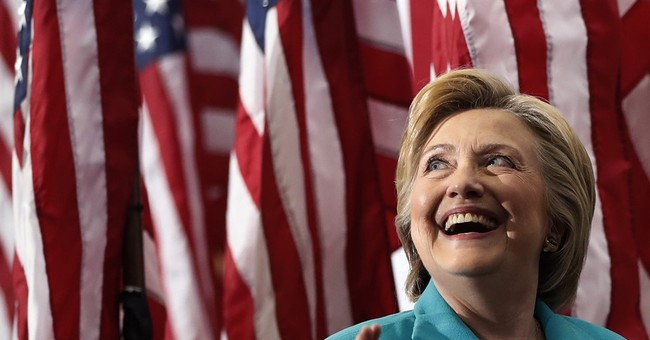 This week we found out that 40% of Americans are irredeemably racist – isn’t that the takeaway from Hillary’s ad and her speech about how anyone voting for Trump is one step away from pulling a hood out of the hamper and firing up a cross? Then we found out that a bunch of bitter virgins sitting at keyboards who occasionally take a break from viewing My Little Pony-themed porn to tweet about their Nordic heritage are the major driver behind Donald Trump. Has anyone actually met a member of the Alt Right in real life? I haven’t, but then I don’t cruise Doritos-strewn basements.

It’s all a lie, and that’s to be expected from a malignant and corrupt monster like Hillary Clinton and her coterie of suck-ups and henchpeople in and out of the media. But it’s more than just a run of the mill, lie du jour like her straight-faced insistence that Comey’s devastating closing argument about her myriad email crimes was, in fact, an exoneration. This is the kind of lie that poisons a political culture, that does real and lasting damage, but what the hell do the progressives care about that? They have been destroying America’s political rules, norms and customs for decades, with the pedal fully to the metal during the last eight years. The only silver lining has been that President Mom Jeans would have caused even greater damage if he didn’t love golfing so much.

Hillary’s racism lie, in which she linked Republicans to the kreepy klown kar her party created and in which her senatorial mentor Robert Byrd served as a Grand Imperial Cyborg Wizard Dragon or something, was not just your typical leftist slander against normal Americans. It was an attempt to marginalize fully 40% of the electorate desperate enough to avoid her no-doubt catastrophic reign by voting for Donald Trump. She and the left want to write this entire chunk of the electorate out of any voice in their own governance by authorizing her progressive supporters to disregard any duty to consider, represent or respect those alleged troglodytes. When these aspiring fascists babble about “crushing Trumpism,” what they are really saying is that they wish to permanently disenfranchise anyone on board the Trump Train instead of the Clinton Express to Venezuela.

But there is no such thing as “Trumpism” – to credit The Donald with an ideology is ridiculous. Instead, there is simply raw opposition to progressivism, which right now has coalesced around a billionaire adolescent, and that opposition is what they truly seek to crush.

We have already seen a preview of how she will rule for the benefit of the connected and favored – just look at Hillary visiting Louisiana. Oh wait, she’s didn’t – she was fundraising in Hollywood. She cares nothing for those waterlogged Louisianans because Louisianans, wet or dry, will never vote for her. And so they must be punished – this is her clumsy object lesson on the price of opposition to her rule. And there will be more of it. There will be two Americas under Hillary, the connected one and the enemy. Guess which America you and I will be part of?

This election cycle is already proving to be a preview of the Clinton presidency. She’s shamelessly lying, with a mainstream media covering for her with various levels of discomfort – some talking heads seem a bit embarrassed when trying to explain how Hillary isn’t really lying to their faces when she’s obviously lying to their faces, while others don the gimp suit to revel in the luscious contempt she shows for them. She is effectively announcing that she will be unaccountable, and she will be unaccountable by all normal political remedies.

It’s the abnormal remedies we should worry about. Once upon a time, presidents did not so blatantly pick and choose among their citizens, dividing them into the favored and disfavored so obviously and so cruelly. They did not openly insist that they would bypass the Congress by executive fiat and through unelected judges to effectively pass laws the people’s representatives rejected. They did not promise to restore unconstitutional laws that made criticizing them a crime. And the media did not openly admit their commitment to supporting their favored president by ignoring blatant corruption. The political coalition currently in power did not openly conspire to effectively exile a huge chunk of the electorate from participation in their own governance.

Abnormal actions spark abnormal reactions; when you throw out the rule book it becomes a very different game. Do they think the disenfranchised, many of whom defended this country in war, are just going to sit back and quietly accept that they no longer have any voice in their own lives, that they must obey the commands of hateful liberal bullies who delight in inflicting petty abuse and insults upon them? Or will there be a reaction? When you ignore the rules and customs and norms and laws, you should not be surprised when your opponents likewise ignore the rules and customs and norms and laws. And then what?

Because Hillary’s towering hatred for normal Americans is dwarfed only by the yawning chasm that is her wisdom deficit, she cannot see the fetid swamp at the bottom of the slippery slope she is rushing down. She will do something stupid, believing that people will simply obey her from habit as if the old legitimacy that made obeying the law habitual still applied. She is going to keep pushing, until at some point, someone is going to tell her “No.”

She will try to confiscate guns or attempt to eliminate dissident Christianity by eliminating tax deductions for churches or decide to thrill her pals in San Francisco by ruining the Lone Star state’s economy by banning fracking, and someone like Governor Greg Abbot is going to tell her “No. No, we aren’t doing that here in Texas. Your rules no longer apply here. Not unless you can enforce them. And trying to do that would be a very bad idea.”

And then that vindictive fool and her allies will have to decide what they will do when mere words and decrees are no longer enough to disenfranchise her opponents.