Kurt Schlichter
|
Posted: Mar 07, 2016 12:01 AM
Share   Tweet
The opinions expressed by columnists are their own and do not necessarily represent the views of Townhall.com. 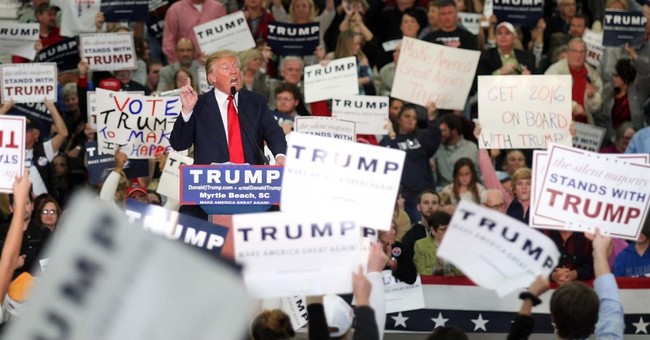 This election is the Republican Altamont, where conservatives got knifed by the Hell’s Angels. It’s our own fault too – the GOP teased its base, looked down upon it, lied to it, and when it turned out it wasn’t playing games and pulled a blade the establishment wasn’t ready.

I spent the last few days at CPAC, surrounded by conservatives, and there was a clear preference for focusing on the symptom – Donald Trump and his myriad failings – rather than the disease. Our problem is not this digitally-challenged, bizarrely phallocentric clown; it’s our failure to represent the people left behind as we got ahead.

Donald Trump is the fault of the GOP elite, including movement conservatives, who failed to listen, who failed to follow through, who thought we were meant to lead the benighted past their narrow self-interests and unseemly prejudices to a wonderful new world reflecting our benevolent self-interests and elite prejudices. Funny how the conservative, globalized utopia we sought to impose always worked out really well for us. Except those left behind aren’t laughing.

Trumpism isn’t merely about unfocused anger – it would be super-convenient to write this off as a temper tantrum that will soon blow over and allow us to get back to the business as usual of ignoring the pleas (which are now demands) to stop the immigration disaster, to address the fallout of free trade, and to stop the useless sacrifice of our sons and daughters in wars we’re too damn gutless to win. But it isn’t. Again and again Republicans promised to solve these problems and yet every single time they’ve lied. Rubio got elected in Florida promising to oppose amnesty then not only fails to do so but stands up with the Democrats and did the exact opposite. And we’re surprised a candidate comes along and points that out?

Think of this as, in large part, the struggle between the haves and have nots of globalization. Amnesty was a great idea for bubble people who think illegal immigration satisfies some sort of libertarian ideal, or who only experience its impact by being able to hire a cheaper nanny. It’s a pretty great idea for the illegals too. But leave your nice neighborhood and go where a high school grad who was born here can’t get a job as a roofer since any general contractor who doesn’t hire illegals is going to go broke because his competition will. Tell somebody whose daughter is shot dead in front of him by an illegal who got arrested five times but never got deported that it’s an act of love.

If we had built the damn wall we promised our base back then, we probably wouldn’t have that damn Trump now.

Free trade is great, in a macro sense. It sure helps enrich the donor class. But go tell the guy who lost his $25 an hour job because NAFTA let Carrier move its air conditioning plant to Mexico about Milton Friedman’s “Free to Choose.” What’s he free to choose? Long-term unemployment? Making a fake Social Security disability claim? Or taking a job greeting at Wal-Mart for $8 an hour?

Immigration and free trade are generally good, but they impose real costs and our base is getting handed the bill. These folks have been asking us for help, and what was our response? Shut up, stupid racists. Well, they finally found someone who is taking their side. His name is Donald Trump, and we made him possible. Hell, we made him inevitable.

But hey, talking about the real problem – us – is hard, so let’s focus on peripherals and hope against hope that we can put the Republican Party’s accounting off for another cycle. Let’s talk about Trump’s weird penis fixation, because that’s easier than introspection. Let’s jump on the ridiculous KKK disavowal train or run a picture of people raising their hands and hint it’s a Nazi salute, even though not one of us actually believes Trump supports the KKK or is a Nazi, because maybe we can tar him (and his followers) with charges we damn well know are false and that will let us avoid the reality of our predicament for a little while longer.

The ultimate denial manifests in the idea that the reckoning can somehow be circumvented if Cruz or Rubio or even Cruz /Rubio wins the nomination. Who goes on the ballot to satisfy Trump’s rebels? Not Tiny Hands – no, he’ll never take veep. How do you keep the yuge numbers of voters motivated by Trump and his willingness to at least talk big about taking the left-behinds’ side from walking? We can’t simply will them and their concerns into silence.

Worse, there are those of us who want to go third party. So, let’s play this out. Trump’s people win the nomination fair and square and then are told, yet again, “No, you still don’t get to win. Sure, you played by the rules, like you always do, but when we elitists saw the outcome, we changed the rules to make sure we won, as we always do.” Good plan. That’ll end well.

The Republican Party is a round hole and its base is a square peg. They no longer fit together, and there has to be a reckoning. Change must come. Political history students are going to be reading about this seismic shift in decades to come, assuming the world doesn’t end in fire and blood. And do not think the Democrats are in any less trouble – we just aren’t seeing the fractures and the fissures in Team Donk thanks to a mainstream media that won’t report them and DNC superdelegate rules that have ensured the fix is in for Hillary.

Individual conservatives have every moral right to act on their principles and refuse to vote for an unprincipled, unconservative individual. Though I intend to vote for the GOP nominee, each new round of appalling idiocy by that vulgar human troll doll tests my resolve. But as much as we wish to focus on the flawed messenger, the problem is that we have refused to heed the message he has adopted (and which I have little doubt he will abandon if elected). It’s not the illegals who are living in the shadows; it’s our own base, the guys and gals who got the short end of the globalization stick. The vast majority of Trump’s supporters are good people who we have let down, and as free agents in the political free market they have found someone who saw a need and is filling it.

They aren’t going away; we need to reintegrate them. To bring them back into the GOP is going to require us to examine our ivory tower policy preferences as well as our prejudices about our own base – and it’s going to require us to start keeping our word. We had no sympathy for the plight of the base, and that’s why now we have the devil.