Trump Is Going To Break Your Heart 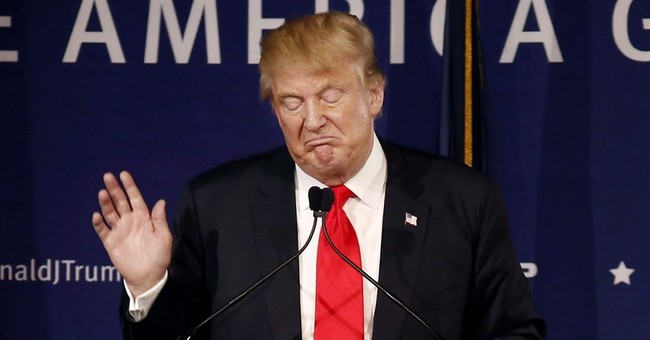 As a young man, I learned that sometimes that hot chick you're dating is also completely crazy and, as much fun as it is to go out with her, it's going to end badly. That's Donald Trump, the super hottie of the "I Hate the GOP Establishment with a Burning Passion That Has Rendered Me Insusceptible to Reason" crew. He's sexy, he likes to party, and he certainly puts out – in the sense that he fulfills your fantasies about giving it to the RINOs good and hard.

That intensely troubling metaphor aside, the point is still valid. Donald Trump is not a keeper, not the one you want to marry. He’s never going to make you happy. For now, he's going to say what makes you happy, and for now he's going to make a lot of the right people go nuts, but if you get hitched he’ll cheat on you with the liberals. At the end of the day, you’ll walk out of the courtroom wearing a barrel while Trump and the pool boy jet off to Tahiti on your dime.

I get the attraction. He ticks off Barack Obama, he outrages Hillary Clinton, and he gives Jeb Bush conniptions. This is all fine and good. He often says the stuff you’re not supposed to say but that most normal people think. Sometimes he says stuff no sane person thinks. He’s fun at parties, except that after he has a few and puts the lampshade on his head he stops being amusing and starts picking fights with your friends.

Look, on the Playboy centerfold list of turn-ons of every true conservative, making mainstream media dorks spasm like roaches after a spritz of Raid is right up there with long walks and sincere people. And it’s even better since they have to have to cover him because they need his ratings, and so they must talk about him endlessly even though it makes them want to die. And anybody who makes mainstream media people want to die can't be all bad.

Pretend I’m your buddy and we’re at a bar and I’m the guy who, among your friends, drew the short straw and has to tell you that your girlfriend is the antichrist. And, Trump people, I am your friend. You, by and large, aren’t traditional conservatives like I am, but you’re hard-working, loyal patriots, veterans and cops, the people who defended this country and who built it regardless of what that fool in the White House says. We agree on much more than we disagree on, and if I was back in a foxhole I’d choose one of you as a battle buddy any day over those simpering GOPe femboys or, heaven forbid, some safe space-dwelling liberal.

But I gotta be straight with you – Trump’s bad news, and everyone else sees it. He’s using you, and he’s going to toss you away when he’s done and never look back. Break it off before it’s too late – this is just a fling, and if it keeps up one day you're going to find your wallet missing and probably your car too. And you’ll wake up with a political rash.

Trump believes in nothing, which is why he will say anything. That’s why he's all over the map, varying his positions not only year-to-year, month-to-month, week-to-week, but even hour-to-hour. First he wants to send all Mexicans home, then maybe not all Mexicans, then yes, all Mexicans, then no, not the great ones. The same with Muslims. One minute it's every Muslim gets excluded, then the next minute no, we're going to let some of them back. Who knows what will be tomorrow. I do – whatever gets him the most attention.

When he dumps you, when he goes back to the New York liberal roots that are at the core of his being and starts talking about how he’s decided to switch back to his old positions, that it’s reasonable to take your guns, to liberalize immigration, and to keep Obamacare, you're going to feel like fools. You're going to be humiliated. And the GOP establishment, which is terrible, is going to be looking at you saying, “I told you so.”

You can do better. The failures of the Republican donor and consultant class created Donald Trump. They made you furious, and you have every right to be furious. They have treated you like dirt and it’s no surprise you picked up The Donald on the rebound. But the answer to being treated like a doormat by a bunch of buttoned-down twits is not to embrace somebody who believes in exactly nothing of what you believe in. You can totally do better. There are plenty of fish in the sea, and they aren’t all named Jeb.

Sure, that's another deeply disturbing image, but not as deeply disturbing as the image of Donald Trump taking his ego trip on the road in a third-party or otherwise ensuring the election of Hillary Clinton. Just like a gold-digging tramp might leave you with a little something that all the antibiotics in the world can't cure, Donald Trump may leave you with Hillary Clinton, and that means the end of everything you say you stand for.

Don't give Donald Trump your heart. He's only going to break it.