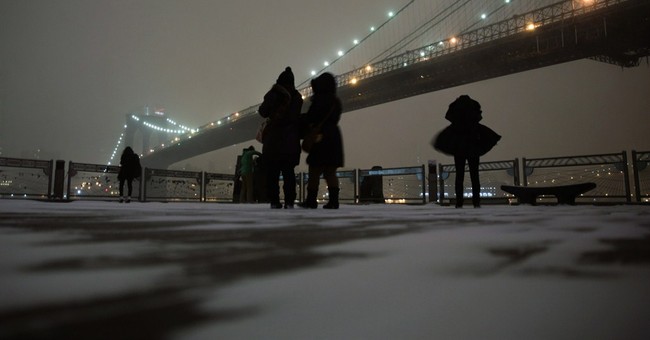 Between global warming suckers getting entombed in ice while trying to prove the Antarctic ice cap has melted to most of America doing a Frigidaire impression, the entire façade of this bogus leftist power grab is crumbling.

Understand that the climate change meme is simply the latest attempt by leftists to trick society into remaking itself in their image. It was never about science. It was always about power and money.

The scammers have been ably assisted by a palace guard media that eagerly reports the scammers’ every lie while ignoring every inconvenient truth. You’ll skim the mainstream media in vain for the reason behind the trapped expedition’s trip to the Antarctic. And, of course, the most inconvenient truth of all is that it hasn’t gotten significantly warmer since the industrial revolution started generating CO2, and it hasn’t warmed at all in recent years.

The left’s use of pseudo-science as a means to seize and centralize control has a colorful history. One particularly colorful scheme was the progressive nightmare of eugenics. Leftist icons like Margaret Sanger eagerly advocated it as a tool to eliminate infants of color.

Let’s fast forward to the 1970s, when we were entering a new ice age and the only possible solution was – surprise - more government power. The global cooling panic morphed into the global warming panic. Suddenly, temperatures were inexorably rising and the ice caps were melting. In fact, they should be melted by now.

But “global warming” is problematic when the uncherry-picked evidence shows that the Earth is not getting significantly warmer. The hockey stick is stuck. Now, one might take this new evidence and revise one’s conclusion to conform to the observed data. We call that science. But we are dealing with “science,” and when the evidence doesn’t support your conclusion you change the name of the phenomenon.

Hence, “climate change.” Its goal was stop us wacky literalists from being able to point to a lack of warming to disprove global warming. Apparently, we were fools to expect that what the scammers called “warming” might involve warming.

“Climate change” is useful because it minimizes the dangerous possibility of negating the theory through observation. Any kind of change in the weather is “climate change.” That means literally any evidence supports the theory. If you really want to tick off a scammer, ask him what piece of observable data would lead him to conclude that his climate change theory is incorrect.

Of course, in science, an unfalsifiable theory isn’t a theory at all. But in “science,” you aren’t really talking about theories. You are talking about politically necessary conclusions that are beyond question. “Science” is a religion, and we’re the heretics.

But even “climate change” has become problematic. What if the climate is not changing for the worse? Recent years have seen fewer hurricanes, and of less intensity. The Antarctic ice the penguins stood on while laughing at the trapped ship of fools was manifestly still there. Polar bears continue to wander the northern wastes uncooked.

So the left has now moved to an even vaguer, less empirically assessable concept – looming “climate collapse.” It’s a beautiful notion, at once evoking some sort of horrendous catastrophe while offering absolutely no way to evaluate its accuracy. The “climate collapse” remains off in the future, vague and ambiguous, an unspecified disaster where something bad might happen and no one can prove the negative, so there is no way to judge it to be fact or fiction.

This is “science.” And if you doubt that something of an undefined nature might possibly occur at some unknown point in the future and maybe have unexplained negative effects, you reject “science” in all its forms. You also probably believe in God and are definitely racist.

Climate change scam arguments pique my lawyerly interest as exemplar tactics, techniques and procedures in the art of obfuscation. But the nomenclature isn’t the only bit of dissembling. The scammers attempt to intertwine the idea that human activity has some sort of impact on the climate with their demand that we transfer to their control trillions of dollars and much of our sovereignty. They intentionally erase the distinction between the cause of the alleged problem and the proposed solution, neatly skipping the effect.

If you believe in science, you can’t make that quantum leap of logic. But if you believe in “science,” you and your media pals will paint anyone who refuses to do so as a mouth-breathing halfwit “denier” who is simultaneously an evil genius in the service of Big Oil.

Oh, how “scientists” hate deniers for actually applying the scientific method to the scammers’ political propaganda. And, as fiascos like Operation Mocking Penguin pile up, and as the coming climate collapse never actually comes, they’ll get even more desperate. The Los Angeles Times and Reddit recently barred dissenters from their pages – there’s no better concession of defeat than silencing your opponent.

The science is settled that “climate change” was a lie from the beginning. And every day without the long-promised climate catastrophe is one day closer to the day leftists will have to find themselves a replacement scam.