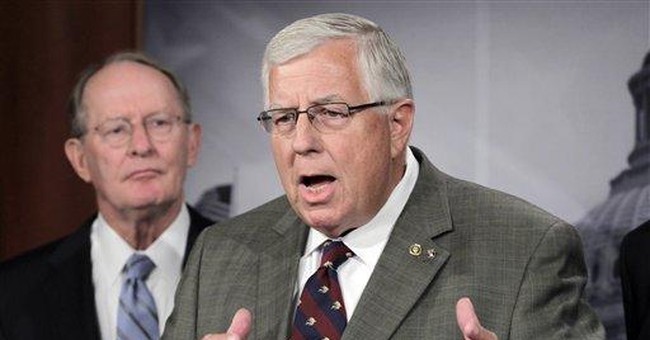 Wyoming Senator Mike Enzi is a loyal Republican, a decent guy, and generally a good senator. He also needs to retire from the Senate because he is not good enough, and I don’t care if that makes him sad.

The New York Times probably thought it was helping him recently when it ran an article about how Dick Cheney’s daughter Liz is planning to challenge him in the 2014 Republican primary. The Times hailed him as “a studious, low-key legislator who worked well with Senator Edward M. Kennedy,” and Enzi probably thinks that’s a compliment.

For that reason alone he needs to go.

He needs to go because we can do better. It’s not about Mike Enzi or any other Republican politician. It’s about winning this war against progressivism, and if you aren’t leading the fight then bow out and make room for someone who will.

Liz Cheney will. The seat would hardly be at risk – the Wyoming GOP primary is better known as the Wyoming general election – so we can take the chance to do better. After all, Liz Cheney has something Enzi doesn’t – a taste for political combat.

Enzi wants to be a sober, serious legislator working with his liberal friends across the aisle to make a better country. Except there are no friends across the aisle, and the liberals do not want to make this a better country. Liberals want to ruthlessly acquire and maintain power and control over every aspect of our lives, and anyone who does not see and understand that and who can’t commit to destroying their hideous plans for our country needs to get out the way for a true conservative warrior.

The Times, perhaps again thinking it was helping, noted that Enzi “avoids political talk shows because, he says, their goal is to get guests to ‘beat up on their colleagues.’”

Except we need GOP Senators to be willing to “beat up on their colleagues.” It’s not about collegiality in the cloakroom. We want you hated, despised, and targeted because that will mean you are getting something conservative done.

We want Ted Cruzes and Rand Pauls, not Lindsey Grahams (By the way, South Carolina, somebody needs to get busy primarying Chuck Schumer’s best buddy).

Worse, Enzi has started to forget about what conservatives do and do not do. He was a prime mover behind the internet sales tax folly. Here’s a hint: Republicans don’t collect taxes for liberal states.

Now, I expect Enzi and the other GOP Senators who should be primaried for failing to perform at a maximum level of effectiveness to feel hurt, upset and even angry. After all, they’ve generally been reliable votes for conservative policies – incomprehensible apostasies like the internet sales tax notwithstanding. Enzi will no doubt take it personally.

It has nothing to do with Enzi and everything to do with making a clear-eyed assessment of who will be the most powerful advocate for conservatism in the Senate. A “low-key,” “studious” backbencher with a passion for bipartisan consensus who won’t make the case for conservatism in the media because it might offend some of his liberal pals is not it.

We conservatives owe Enzi nothing. Nothing. Serving three terms in the Senate was reward enough for services rendered to the cause – in fact, that he’s served three should probably disqualify him by itself.

For too long the GOP has given nominations to the next old dude in line because he was a nice guy who hung around longest. For every Tea Party-linked former witch or half-witted would-be obstetrician, there are many more nice guys who ended up finishing last.

This needs to stop. We need to ruthlessly identify and select the strongest conservative voice who can win in every election even if good men like Enzi have to move aside. It’s not about their hurt feelings. I don’t care about their feelings, not even a little. Nor should you.

If Liz Cheney fails to win the nomination, I’ll eagerly support Enzi because it’s not about Cheney either. If and when she stops being useful to conservatism, I’ll support someone else.

Call it the “Rubio Effect.”

Mike Enzi is a good senator, but not a great one. We can do better, and when the future of our country is at stake, a “good enough” conservative is nowhere near good enough. He can leave with his head held high, with our respect despite some minor disagreements. Or he can choose to fight a bruising primary battle against Cheney that his pal Alan Simpson says could cause “the destruction of the Republican Party of Wyoming.”

And for what? For the chance to spend six more years checking the boxes, but not making any waves?

It’s time to go, Senator, preferably at the top of your game and with dignity. But, one way or another, it is time to go. To quote Abe Vigoda in The Godfather, “Mike, it was only business.” Now get in the car, Senator.