In Venezuela, America Is the Beacon of Hope for a Struggling Nation

Kimberly Guilfoyle
|
Posted: Sep 13, 2019 12:01 AM
Share   Tweet
The opinions expressed by columnists are their own and do not necessarily represent the views of Townhall.com. 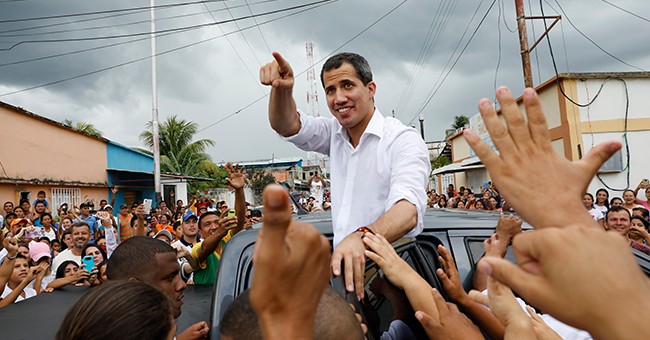 The socialist-driven economic and humanitarian crisis ravaging the beautiful country of Venezuela should give every American pause. It is not just that this ideology, which has failed the people of this South American nation, is now establishing a footing here in the United States—but it’s also because our beacon of hope that shines throughout Latin America is being threatened by America’s adversaries.

As White House Senior Advisor Ivanka Trump met with Venezuelan refugees in Colombia last week, she promised, “we stand with the people of Venezuela in their struggle to restore democracy, freedom, and the rule of law.” No doubt this was heartening to the four million Venezuelans who have fled a dictator and the devastation caused by his socialist policies.

Yet, lofty promises can so often ring hollow to victims suffering the consequences of violence, corruption, and totalitarianism. However, the sincerity of Ivanka’s pledge was matched by the U.S.’s meaningful efforts to support the people of Venezuela and its return to democracy. On the occasion of her visit, this meant a $120 million aid package to assist the country’s displaced.

In broader terms, it demonstrates the Administration’s full commitment to a political transition and the rebuilding of Venezuela under a democratic government that embraces freedom.

This commitment has also included constant coordination with the interim Guaido government, intense diplomatic efforts with like-minded allies, and biting sanctions targeting corrupt officials in the Maduro regime. It has also included maintaining a critical relationship with the Venezuelan energy sector. The importance of this relationship in the midst of Venezuela’s crisis may not be obvious, but it is perhaps the most critical element to our ability to help the country rebuild post-socialism.

As it stands, Venezuela sits on the world’s largest energy reserves—a massive oil field of 500 billion barrels by some estimates. For a hundred years, American companies have worked in Venezuela to create a tremendous amount of wealth that, for the larger part of that century, made Venezuela the richest and most stable country in South America.

In order for Venezuela to economically rebuild towards its former glory, it will need to rely on its natural resources—and the American technical expertise to extract it. At an estimated value of $25 trillion, these resources represent a new future for the country and its 30 million citizens.

This is why we must continue to allow American interests to maintain their assets in Venezuela. Without American companies there, economic vultures like Russia and China—who are no friends to the pursuit of freedom and democracy—are poised to swoop in and exploit Venezuela’s oil reserves for their own benefit.

As President Trump stated during the 2018 World Economic Forum, “ ‘America First’ doesn’t mean America alone.” With our companies on the ground, we will be there from day one after the Maduro regime has fallen in order to provide the necessary technical assistance. This will allow America to continue to serve as the beacon of hope through the economic empowering of a free, democratic Venezuela, while also providing opportunities that will improve the lives of every citizen.

The Trump Administration has also been wise to allow our energy companies to maintain their presence because it protects American national security. The threat of Russian and Chinese entities replacing American companies certainly does not benefit the Venezuelan people, but it also would provide an economic windfall for foreign interests and give them a foothold in our own hemisphere. That cannot happen.

By supporting the continued presence of American energy companies in Venezuela, President Trump is ensuring America’s beacon of hope will continue to shine throughout the nation as the fight for freedom and democracy endures.

Kimberly Guilfoyle is a political and media strategist. She was a co-host of the “The Five” and an anchor for 12 years at the Fox News Channel. She went on to serve as the Vice Chairwoman of America First Action, before joining President Trump’s 2020 re-election campaign as a Senior Advisor.