Who Gets to Decide What Is in the Best Interest of Our Children?

Kimberly Fletcher
|
Posted: Apr 30, 2018 2:00 PM
Share   Tweet
The opinions expressed by columnists are their own and do not necessarily represent the views of Townhall.com. 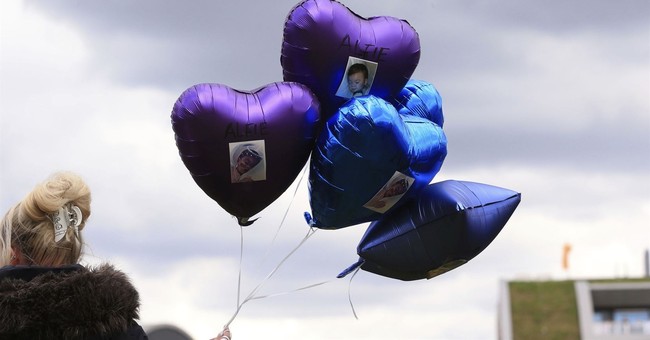 The story of Alfie Evans, the 23-month-old boy forced off life support by the British Courts and hospital monitoring his case, has captivated the attention of the world. Many are still scratching their heads over this one. Social media is flooded with the story, and even the Pope weighed in. The U.K.’s government-run medical system, National Health Service (NHS), actually went to court to fight to end Alfie’s life. Dr. Ranj Singh, clinical technician with NHS said, “Withdrawing life support is not killing someone. It is redirecting care to make them more comfortable and give them the most dignifying life that you can.”

Shouldn’t the parents be the ones to decide that?

After Italy gave Alfie citizenship so his parents could take him to Rome for an experimental treatment, the Judge not only denied the family the right to take their son to Italy, he wouldn’t even let them take him home because he considered the parents a flight risk. As Tara Burton of VOX writes, “Ultimately…the Evans case was about who gets to decide what the best interest of a child really is.”

There is a major movement among government officials and agencies to usurp parental rights and authority. It is based on one word--fundamental.

The Supreme Court has classified all our rights into two basic groups: Fundamental and non-Fundamental—regardless of the fact there is no basis in history or law for such classifications.

According to constitutional lawyer Michael Farris, there is a big difference in these two categories when deciding legal cases. A fundamental right favors the citizen and the government bears the burden of proof.  A non-fundamental right, however, presumes the government law or action is constitutional and the citizen has to present evidence there is no reasonable basis for the law or action.

The right of parents to direct the upbringing and education of their children is a fundamental right. Very few Americans would disagree with that. However, government agencies and court officials are attempting to define the government as "partners" with parents in raising their children declaring that parent's rights are non-fundamental when "the best interest of the child" is in question.

In December 2016, the U.S. Department of Health and Human Services wrote a new draft policy statement about “helping” families stating, “It is the position of the Departments that all early childhood programs and schools recognize families as equal partners in improving children’s development, learning and wellness across all settings, and over the course of their children’s developmental and educational experiences.”

This idea has carried over into the education, welfare, and well-being of our children so far that government officials, community leaders, and media are actually openly claiming our children are not really ours. They claim they belong to the entire state and community. Political Commentator Melissa Harris-Perry actually did a commercial promoting the idea that our children belong to the collective community. Alan Scholl, Executive Director for Freedom Project Education, said, “The danger of government as a parent is an age-old battle.”

Reasonable thinking people would conclude the state would only enlist the "best interest of the child" scenario in cases of abuse or neglect. Unfortunately that is not the case. The state is taking their imposed "partnership" role far beyond any reasonable "best interest" situation.

In the fall of 2014, Cassandra, a 17 year-old girl from Connecticut, was taken from her mother by order of the court and forced to undergo chemotherapy against her will and wishes. Cassandra was diagnosed with Hodgkin’s lymphoma and decided, after receiving thorough medical advice that she did not want to receive chemotherapy.  Her mother supported her decision and was then charged with neglect. The judge ordered Casandra to be removed from her home and custody given to the Department of Children and Families (DCF).

DCF, acting on behalf of the state, said they were obligated to intervene stating, "It's their duty to act when a child would die if medical decisions were left up to the parent."

Unless of course, as in Alfie’s case, the government decides death is the right intervention.

In Cassandra’s case the "best interest of the child" led to her being taken from her home and family, put into the custody of strangers and forced into a hospital where her legs and arms were strapped down so the hospital staff could forcibly administer chemo drugs—all while being supervised by police.

In New Hampshire in 2014, William Baer was arrested at a school board meeting for breaking the two minute rule while protesting a book his 14-year-old daughter was assigned to read. The book was riddled with graphic sexual content.

In 2013 two California parents, Alex and Anna Nikolayev, had their baby taken from them by force simply because they wanted a second opinion on their baby's medical care. "It’s like parents have not rights at all," said Alex.

Our rights come from God not government.  So the question is, are parent’s rights Fundamental or non-Fundamental? Do we have a fundamental right to teach, raise, and nurture our children or don’t we?

When Nebraska Governor Pete Ricketts, was presented with the question he took a bold stand. “Parental rights are paramount,” said Ricketts, “and must have a clearly defined role in any state-sanctioned program that impacts a child.”