Raising Boys in a Feminist World

Kimberly Fletcher
|
Posted: Apr 23, 2018 12:01 AM
Share   Tweet
The opinions expressed by columnists are their own and do not necessarily represent the views of Townhall.com. 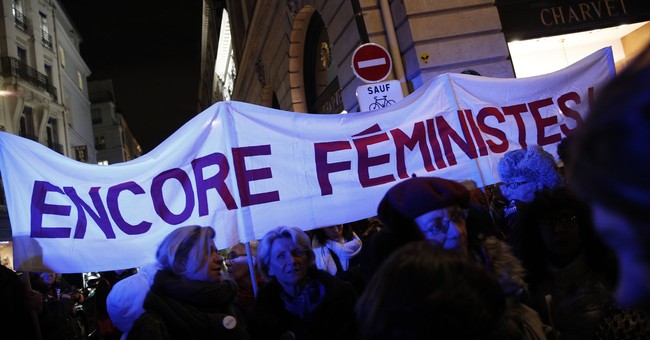 I recently read a quote by Elizabeth Acevedo, from her poem Spear, where she addresses the “rape culture” from a mother’s perspective. She writes, “I can’t trust this world to teach their sons how to treat my daughter. So I will raise her to be a sword, a spear, a shield.”

Can you imagine being a little girl and told that boys are not to be trusted, that they are out to destroy you and growing up believing that every man you pass on the street is thinking of raping or assaulting you or using you for their own personal gain? I can only imagine the life of crippling anxiety that would cause. I wouldn’t wish that kind of life on my worst enemy much less my own daughter.

While I completely recognize there are women who are assaulted and even raped, I absolutely reject the claim that we are a ‘rape culture’ and I do not accept ridiculous, fabricated terms such as ‘toxic masculinity’ intended to subjugate our men and boys. I do, however, recognize the indisputable fact that we are a sex culture literally obsessed with sex. This is largely due to the fact that feminist women have not only allowed it, but encourage and even promote it.

The sad thing is, by teaching our girls to be angry, on guard, and abrasive, we are actually diminishing their power and influence on our men and our culture. We teach our girls to demand respect but when a boy shows them the highest respect and honor by opening a door or giving up their seat on a bus they are lashed out at. Feminist society tells our boys and men it is oppressive and controlling behavior to offer a seat or open a door for a woman. I remember my grandmother whacking my cousin over the head with her umbrella for not giving up his seat to a woman.  How times have changed.

Women used to command respect through grace and dignity, while mothers taught their girls to be modest, graceful and worthy of the utmost respect from boys. Today women dress to entice men but are offended when the men respond. Our girls are encouraged to dress sexy but mothers are outraged that boys would be aroused by it. How can we expect men to not treat us as sex objects when we dress and behave like objects of sex? How can we expect to raise our boys to respect women in a society where feminists are not only promoting but demanding the exact opposite?

Organizers of the Women’s March (yes that one) tweeted that it was an absolute crisis that Backpage, a sex trafficking website, was shut down. Backpage.com is well known for facilitating the sale of trafficked minors, mostly girls, for sex all over the United States. The FBI arrested several top Backpage officials on 93 counts, including 17 cases of trafficking victims as young as 14. You would think feminists would herald this as a triumph for girls and women’s rights. Instead they declared it a crisis heralding that, “Sex workers rights are women’s rights.”

Feminism is no longer something we can ignore or just roll our eyes at. It is much more than a mass mob of pink hatted angry women shaking their fists at anyone who disagrees with them. It is a cultural epidemic with real consequences.

Andrea Dworkin, a well-known feminist activist said, “Under patriarchy, every woman's son is her potential betrayer and also the inevitable rapist or exploiter of another woman."

While that may seem absurd or extreme to most of us, the underlying message in society reflects that very image today. Feminism grooms our boys to become victimizers and our girls to be perpetual victims. And despite what many self-identified feminists believe, turning our boys and sons into the “enemy” is one of the main objectives of the feminist movement. All this anti-man culture has made it very difficult to raise good, strong, polite, and confident boys but it is possible—and it begins at home.

I am the mother of six sons and two daughters. I realized long ago that if want to change the culture I need to raise my children to be ambassadors of change. In my world chivalry will never be dead.  I not only accept the honor of having my husband and sons open the door for me, I expect it. I know there will be times when my sons will be mocked or lashed at for such things but I teach them to do it anyway. If we teach our sons respect in this small and simple way, our boys will grow to be men who respect and cherish women. If we raise our girls to expect to be treated like the princesses they are our men and boys will rise to the expectation.

If I can’t trust this world to teach their sons how to treat their daughters, then I will raise my sons to be a sword, a spear, a shield against the men who dare treat the daughters of God as anything less than the queens they are.