Message to the Freedom Caucus: “Never Give Up. Never Surrender!”

Kimberly Fletcher
|
Posted: Mar 31, 2017 12:01 AM
Share   Tweet
The opinions expressed by columnists are their own and do not necessarily represent the views of Townhall.com. 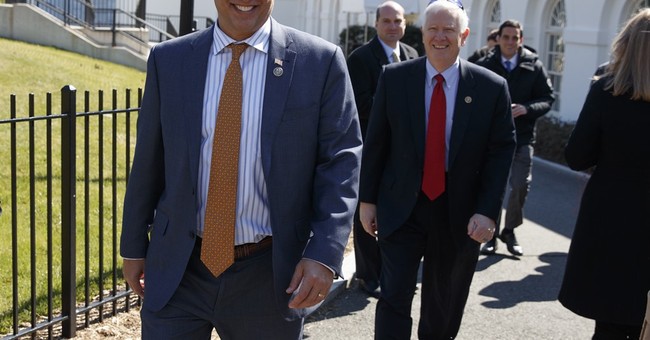 President Trump’s tweet slamming Freedom Caucus this week has a lot of Trump supporters very upset. While conservative talk show hosts spent most of the day Tuesday slamming those who didn’t support the healthcare bill introduced in the house, listeners of those shows almost unanimously called into the shows to defend them. The message to the Freedom Caucus on social media and comments to articles like Dennis Prager’s is pretty clear—Never Give Up and Never Surrender!

It is extremely frustrating to see a window of opportunity like we currently have go to waste when we, the people of the United States, have worked so hard to get here.

So for those who’ve taken to the airwaves and social media to slam the Freedom Caucus, Heritage Foundation and every American who didn’t support the bill because we don’t trust our government to “ease” into anything, let me share a little perspective—not from the right or the left, but from the hard-working Americans who are suffocating from the government noose tightening around their necks.

Dennis Prager said on his radio show this week that we need to support “fragile compromise” to get to what we want. As someone who has been involved in elections, grassroots campaigns, and civic activism for two decades I know how the underbelly of this political system works.  “Fragile compromise” never works in favor of constitutional conservatives.

We have been dealt a bill goods and the American people just don’t trust it. I am all for compromise when it makes sense but we’ve worked way too hard to get where we are to settle for mediocre labeled with “just trust us.” The American people don’t trust government—of any party affiliation.  We’re not even in the trust but verify stage. We’re leery and will scrutinize everything carefully. Going after the Freedom Caucus—people we worked tirelessly to elect—does not help their case.

There are a few points we should make clear.  Donald Trump was not elected by the people of this country because he is a Republican. He was elected because the American people believed he was courageous enough and tenacious enough to go against the establishment of both parties and really get things done. A lot of Trump supporters this week wished he’d remember that.

The Freedom Caucus is not the enemy, they are Trump’s best asset to fulfilling his promises to the American people who elected him. Many of us had serious misgivings when President Trump chose Reince Priebus as chief of staff.  Those misgivings diminished greatly when his other appointments were announced. Now many are wondering if President Trump is listening to the wrong people and ignoring all those we elected to support him.

The healthcare bill will never be supported by Democrats no matter what it says. They won’t support anything Donald Trump does, supports or introduces so why are we trying to appease them? The members of congress aren’t there to do whatever it takes to keep their jobs, they’re there to “support and defend the constitution against all enemies, foreign and domestic.”  The members of the Freedom Caucus take this oath very seriously even when it is unpopular. I’m not dismissing the constitutional allegiance of other members of congress who supported the bill I’m sure many of them truly believed it was the right thing to do.  Those of us who didn’t think the bill was enough are not blaming or throwing insults at those who supported it. We deserve the same respect.

We have good reason to be cautious. We have been fighting Obamacare since Nancy Pelosi proclaimed congress needed to pass it so they could see what’s in it.  Hundreds of thousands of American’s descended on the nation’s capital to protest the Affordable Care Act but they passed it anyway.  The Supreme Court was the next hope but they sold out the constitution.  After phone calls, emails, rallies and protests, finally the American people had hope that Donald Trump was the person who could finally get the job done.  He didn’t promise the American people “I’ll piecemeal it away in phases.” He promised to repeal and replace.  Senator Ted Cruz wrote an excellent article on how simple it would be to do it and Senator Rand Paul introduced his own replacement which is much more what we are looking for.

Obamacare was run through congress like an unstoppable bulldozer because the Democrats had the numbers to do it.  Well now we have the numbers so why are Republicans not doing the same.  And why are we making it about parties at all when we elected Donald Trump to blow past party allegiances and get things done?

It shouldn’t be about parties, it should be about defending the constitution and doing what’s right by the American people. This isn’t high school, it’s the real world. Members of congress should be much less worried about being accepted by a party and more worried about what America will look like in the next election if Obamacare isn’t repealed.

If congress keeps trying to repeal Obamacare little bit at a time we’ll never get it done. What will happen is things will get worse, Republicans will get the blame and any hope of a conservative surge is gone forever. Bring the full repeal and replace to the floor and let each member of congress make their vote on the record.  We’ll remember who voted against it. The last few elections proved that.  The American people are suffocating.  Freedom Caucus members don’t want to loosen the noose a little, they want to cut the rope.  Give them the scissors and get it done!