Could General Patton Have Prevented the Cold War?

Kevin Mooney
|
Posted: Nov 10, 2020 12:01 AM
Share   Tweet
The opinions expressed by columnists are their own and do not necessarily represent the views of Townhall.com. 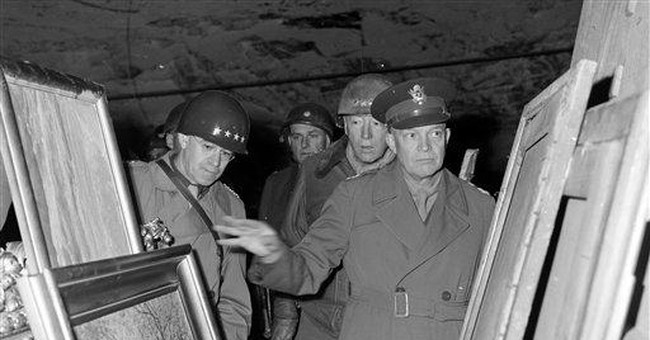 Instead of halting the American advance and playing nice with Russia at the end of World War II, Patton wanted to stave off future threats. That’s why the American general was poised to have U.S. troops move in and occupy Berlin, Prague, and other parts of Eastern Europe. So why didn’t the allied leadership allow Patton to have his way? And, why was Patton effectively silenced before he could address the American people?

Robert Orlando, a filmmaker, author, entrepreneur and scholar, addresses these questions in a new book titled “The Tragedy of Patton” and an accompanying film titled “Silence Patton.” Although he was vilified in his time, here on this Veteran’s Day, it should now be evident that Patton was prescient in his warnings about the Soviet Union and strategically forward looking.

“Patton is best thought of as the antihero of the Second World War,” Orlando said in an interview. “He could be daring and highly imaginative on the battlefield, but he lacked the tact and diplomatic grace of his contemporaries and this had some real political consequences. But Patton was also the kind of general the allies needed to get the rough work done on the ground. He was outspoken about the conduct of the war and eager to identity the Soviet Union has the next great threat to American democracy. Only a few years after his very suspicious death, Patton’s strategy and vision were vindicated.”

The film opens by reviewing details about the automobile accident that ultimately claimed Patton’s life on a road in Mannheim, Germany on Dec. 9, 1945, seven months after the war ended in Europe. Everyone else involved in the accident walked away, but Patton died before he could go home to America to give his version of events that led to the end of World War II. Orlando steers clear of any conspiracy theories, but does make the point that President Franklin Roosevelt’s administration and America’s top military brass were concerned about what Patton might say about the Soviet threat and how the American public might react to his comments.

“There would have been people in FDR’s administration who would have detested George Patton,” Paul Kengor, a Grove City College political science professor, and author, says in the film. “There was the fact that Patton thought the Soviets were the threat, or at least the future threat post war. The FDR administration has a bunch of people who were in some cases outright Soviet spies, Soviet sympathizers, dupes who were soft on communism.”

“Eisenhower recognizes the value of Patton on the battlefield,” the film’s narrator says. “He’s a master strategist, a determined tactician and a hard driving commander.”

Eisenhower is quoted as saying, “In pursuit and exploitation there is a need for a commander who sees nothing but the necessity of getting ahead. The more he drives his men, the more he will save their lives."

Victor David Hanson, a senior fellow in military history at the Hoover Institution at Stanford University and a professor emeritus of classics at California State University, Fresno, provides insight into Patton’s view of warfare and what needed to be done to transform the American army into a lethal fighting force.

“Aggressiveness, brutality, killing is not innate in our democratic DNA and we have to learn to be killers. We’ve got to get rid of this whole romance that you get shot in the shoulder and then suddenly, you’re a hero and you get a purple heart. You’re not a hero. You’re only if before you got shot in the shoulder you went out and shot a bunch of Germans or you blew up a panther tank.”

Unlike other generals, Patton was an “aggressive thruster,” Hanson explains.

But unlike some of the other generals, Patton did not smoothly transition over to diplomatic and political settings, the film explains.

“The qualities that made Patton successful on the battlefield, unflinching nerve, audacity, fearless candor, were the very ones that made him a nuisance when the fighting was over,” the narrator explains. “Off the battlefield Patton is a liability, he lacks diplomacy and his actions by some accounts are insubordinate.”

At the heart of film, is the question of whether in retrospect Patton was right to preempt Soviet troop moves across Eastern Europe.

“The Allied troops were within 200 miles of Berlin and were held back from capturing the capital to let Soviet troops move in,” Orlando says. “Patton felt that this made what became known as the Cold War inevitable. He said it often, and loudly enough that he was relieved of his command and silenced. What I’ve found since the film’s release is that Patton’s behavior, character and performance on the battlefield is looked at not through the lens of history, but is retrofit into the standards of today, forgetting that the 1940s were an ugly, challenging time for the Allies and that Patton was uniquely up to the challenge.”

Orlando is the president and director of Nexus Media, a Princeton, New Jersey based filmmaking studio. A complete list of the cast and crew for “Silence Patton” is available here.

The film explains how Patton was horrified by how Soviet leader Joseph Stalin brutalized German civilians and went to his grave seeing an opportunity to free the people of Eastern Europe.

There’s one quote from Patton that echoes from the beginning to the end of the film and that resonates into today.

“Tin-soldier politicians in Washington have allowed us to kick the hell out of one bastard [Hitler] and at the same time forced us to help establish a second one [Stalin] as evil or more evil than the first.”

Orlando’s original film “Silence Patton was released by Sony Pictures in 2018, but the book The Tragedy of Patton: A Soldier’s Date with Destiny, explains, “was the product of a lifetime of passion and study for the subject.” The book and the film detail Patton’s warnings about the coming Cold War, but the book takes a deeper dive into Patton’s religious convictions and in the words of Orlando “showcases a man obsessed with fulfilling his military legacy for God, country, and his intense drive and ambition that places him in the pantheon of our greatest generals!”