Kevin McCullough
|
Posted: Nov 04, 2018 12:01 AM
Share   Tweet
The opinions expressed by columnists are their own and do not necessarily represent the views of Townhall.com. 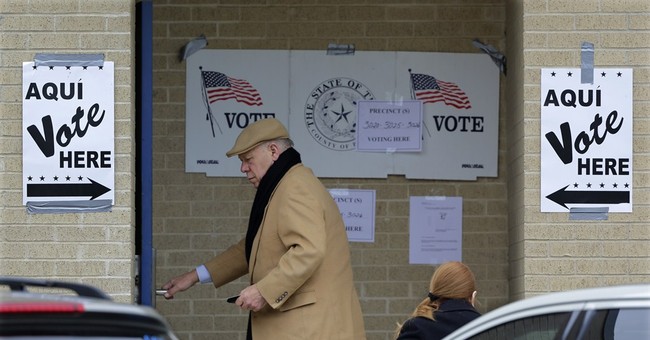 Three days before the election in 2016 every major pollster in the nation predicted Hillary Clinton would be the next President of the United States.

Three days before the election in 2016 President Trump was at that time as risky a bet for conservatives & Republicans as he was for working class Democrats. They had all been let down by an establishment system that claimed to put them first but had seldom delivered in the previous number of years.

Three days before the election in 2016 nearly every major media pundit believed the never-Trump split in the Republican Party would prevent the nominated candidate from taking office. This would insure that the established progressive powers could continue to guide the direction of the courts towards America last, non-Constitutional, emotionally fickle rulings that would deliver through judicial activism what they had never been able to deliver through representative government.

Three days before the election in 2016 then President Obama believed the corruption buried deep in the infrastructure of the Department of Justice, the FBI, the State Department, the IRS, the White House Counsel’s office, and the remainder of his executive branch had enough insiders planted within to push forward his legacy of progressive governance. This cabal would also simultaneously punish those who didn’t play along.

Three days before the election North Korea, Iran, Russia, & China firmly believed they had another pushover lining up for the job in Secretary Clinton. Their ability to scam American interests on the foreign policy front would continue unabated.

They were all so wrong.

The landslide that had Hillary Clinton on the losing end ruined all of their plans. In a runaway crushing of 30 to 20 (of 50 states) the people demonstrated a different mind than that of the corrupt established elite club dedicated to fundamentally transforming America into one of the weakest and most inept versions of herself in history.

Now three days before the elections of 2018 pollsters are again predicting that Democrats will win crushing victories and return the control of Congress to the Democrats.

Now three days before the elections of 2018 the media believes it is finally the beginning of the end for President Trump.

Now three days before the elections of 2018 never-Trumpers have largely returned to the GOP base and some of their most vocal members from 2016 have pledged absolute support for Trump in 2020.

Now three days before the elections of 2018 two original language strict constructionists sit on the Supreme Court. Far beyond that 84 additional lifetime appointed judges sit on circuit and district courts. Three more conservatives have even been added to the whacky 9th Circuit (the most overturned court in the nation.)

Now three days before the elections of 2018 President Trump has fixed the economy, overseen an explosion of jobs and wages that defy historical norms. North Korea, Russia, China & Iran are on the outs. ISIS has lost 99.7% of its territory. Trade deals with nearly every major trading partner have been made more favorable to the American worker.

And that cabal wholly dedicated to resisting Trump and preserving Obama’s legacy within the executive branch has been exposed for the lying hypocritical and criminal creeps they are.

There is much more to do. Even more importantly there is much that must be prevented from allowing everyone who opposes this progress to do.

Never has a President campaigned harder — literally picking up his parties’ Congressional members, putting them on his back and doing all he can to get them across the finish line.

His tireless work ethic on the campaign trail in 2016 proved how crooked the system was. His rallies were enormous. The polls were 1000% wrong. And election night turned into a narrative nightmare for the established media, establishment political class, and the progressive political class so intent on preventing American greatness from re-emerging.

Three days before the election of 2016 I drew a map that got within one state a prediction of nearly the exact outcome of why President Trump would win. I felt odd at the time because my friends and colleagues who had been Trump supporters longer than I had been didn’t believe he would win.

Three days before the election of 2018 my intuition tells me election night will be a bit of surprise. The GOP should expands seats in the Senate. The GOP may even possibly hold the House in what would be a historical accomplishment not seen in 32 years.

I’ve even recommended grief counselors be brought in for the pundits in MSNBC and that other network—what’s its name—the one that trails the Cartoon Network and infomercials most nights... oh that’s right... CNN.

The people won’t abide being carved up, compartmentalized, and counted out before they even show up.

Three days from now they may just show those pundits and media anew—just how little they actually know.