It Was No More The Guns, Than The Bombs

Kevin McCullough
|
Posted: Oct 28, 2018 12:01 AM
Share   Tweet
The opinions expressed by columnists are their own and do not necessarily represent the views of Townhall.com. 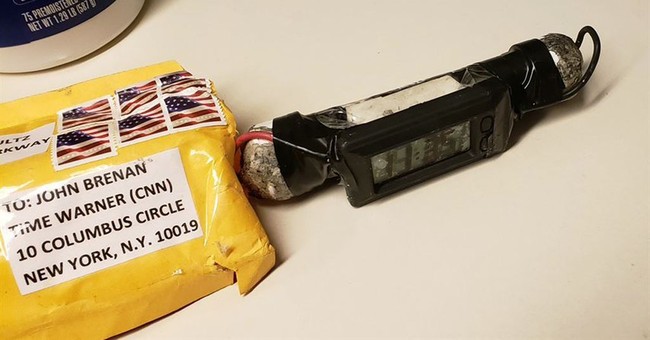 Wrapping up a week of some tragic and absurd news stories it was easy to see the knives coming out.

Two national horrors in back to back succession left many asking for answers—as is almost always the case.

Two mentally disturbed individuals—one a Trump “supporter” (though his life demonstrated values far different from his social media,) the other an avowed hater of the President.

Their support or hate of this President or the previous, or the next ten of course does not matter. The media will nevertheless blame all of it on a Republican President that most of theirs didn’t vote for and would do so no matter who occupied the office.

Discussions will unfold all this coming week on the somber circumstances and how “important” it was for the media to quickly identify what type of firearm the Pittsburgh shooter used, and why the only possible solution is to take more guns away from lawful gun owners.

With both attackers now in custody the pipe-bomber and the Pittsburgh shooter are now getting something both may have sought—fame and notoriety. Unlike the victims in the steel city and the intent of all those who received a strange package with questionably operational explosives, both of these attackers will live to see another day. The injustice leaves legitimate justice seekers fuming.

The President is entirely proper in calling for the death penalty.

Sadly the Left’s approach will be to protest the lawfully installed President, to insist upon taking rights away from non-law-Breaking citizens, and to demonize anyone who doesn’t buy into their tired claptrap.

Eventually all of this will be leveled at the feet of inanimate objects—the guns themselves.

Taking them away—preferably from the entire citizenry—is the only thing that will quench the thirst for control from the activist political class, celebrities with outsized perspective of their own opinions, dishonest faculty in the classrooms of the universities, and smarmy news anchors who look down their noses at close to everyone.

But it wasn’t the guns that left us the tragedy in Pittsburgh.

For it took human fingers to pull the triggers.

Just like it took human hands to create the dozen bombs sent to politicians, without human hands pulling the trigger on three firearms those eleven fatalities would be alive today.

No it wasn’t the guns, the gun laws, the politicians, or the NRA that did any of this.

Truly the source of this pain is traceable.

It can be defined, identified, and in an attempt to be helpful even be targeted.

But our society doesn’t wish to.

Because to admit the real culprit is to admit something that all the elites try desperately to avoid.

Basically... looking in the mirror.

Mankind is sinful. Left to our own devices murder is normal.

And it is but God’s intervention into our hate-filled, sin-obsessed state that any of us find redemption, peace, and freedom from the demons that obviously prey upon some more than others.

Mankind’s decrepit and corrupt nature in a “normal” person is something that only God can offer the answer to. But stick that same sin-stained-soul in the body of someone who is even more broken than most. Someone who has stopped functioning at even a basic level with their fellow humans—and the potential for disaster abounds.

In doing so we sentence future generations to more pain exponentially.

The first sin recorded in scripture beyond Adam and Eve in the garden of Eden was one brother killing another. And we have been capable of doing the same ever since.

But until human behavior is recognized as the source the killing will never stop.