Kevin McCullough
|
Posted: Sep 23, 2018 12:01 AM
Share   Tweet
The opinions expressed by columnists are their own and do not necessarily represent the views of Townhall.com. 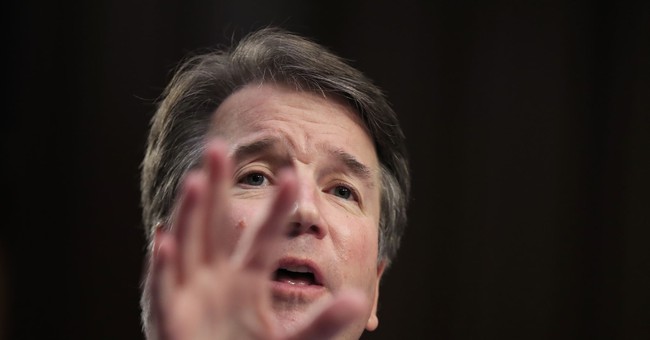 There are dozens of bonafide reasons as to why the Senate has no obligation to delay the Kavanaugh confirmation another minute.

The underhanded nature with which the activist and sore-losing leftists in the U.S. Senate have conducted nearly every element of this drawn out exhibition has been noted by an electorate that put in office (by overwhelming margin) a President they hoped would transform politics into something resembling a system that once again works for Americans.

GOP “likely turnout” for 2018 (over the past two weeks) has *increased* by an average of 3-8% according to the poll measuring it.

Since leftist Democrats are dealing with an identity crisis in their own party they are desperate for two things: a unifying cause & a perceived win on... well.. anything at this point.

It’s my belief that such desperation caused Senate Judiciary members to stage wildly off-putting confirmation hearings with Judge Brett Kavanaugh. But also in the wake of those hearings decided to double down on maybe the flimsiest strategy they’ve come up with yet.

Considering that Senator Diane Feinstein and Dr. Christine Ford’s own attorney have both openly cast doubt on reliable truthfulness of Ford’s account, memory & “evidence,” it does defy more than a bit of reflection.

The on-again, off-again, & anything-but-confident decision to appear at the judiciary committee’s re-opened hearings into the Kavanaugh confirmation was even fought for by the Judiciary Democrats, before they opposed it, only to (we think) now embrace it again.

To West Virginia coal miners that just looks shady. To auto workers in Ohio it looks desperate. And to the factory workers in Michigan, they’d never personally put up with such nonsense.

Yet even when Dr. Ford arrives this week to finally testify, there remain significant hurdles between her story, and anything resembling provable behavior on Kavanaugh’s part that ends with him being removed from nomination.

Here’s just some of those hurdles:

Her Story Is Public - The moment that someone in Feinstein’s office decided they had the right to leak her name, send Dr. Ford’s life into chaos, and eventually force her to tell the Washington Post her story she immediately lost credibility, and opened up public examination of her claims. The reason this has worked against her instead of Kavanaugh is the lengthy discussions the public has now had in every coffee shop in every corner of America. Usually ending when one of those in the discussion asks, “Does anyone sitting here believe someone should be thought guilty of something without proof?”

Her Story Lacks Corroboration - The lack of evidence is also primarily sourced from the accuser’s own account. It would not hold up in a court of law to claim that lacking physical evidence there is also a lack of even basic details. No medical evidence, no eye witnesses confirming her “details,” (rather a witness that claims the event never occurred,) no place, no time frame, and no actual consistent explanation of why she was there, who was with her, or much of any other detail.

Her Story May Not Include Kavanaugh - When an attorney who isn’t even working the case can put together a better string of details that support the accuser’s version (as best as any can be) and that string leads to another schoolmate who looked nearly identical to the accused it means something significant. (It doesn’t mean the look alike is guilty of anything either.) But what it definitively proves is that there are Mack-truck-sized holes in the story. It is not necessary for Judge Kavanaugh to prove anything about his whereabouts on whatever mystery day is in question. That there is even one additional workable theory—lacking material evidence—in a court of law the accused is vindicated.

His Story Is Not Public - Due to Democrat shenanigans the news oxygen has been largely sucked out of the universe with Ford, her attorney, Feinstein, Grassley and even as late as Friday — the President. The person we have yet to hear from as it relates to these mysterious and non-definitive claims is the man they have been made about. Undoubtedly one of the reasons Democrats opposed reopening the hearings is because Judge Kavanaugh will be granted his due. It will be definitive, declarative and likely as strongly asserted and articulated as nearly everything else he answered to during his many dozens of hours before the committee. It will be a powerful moment when he is finally granted permission to face his accuser and respond to her claims.

His Life Is Corroboration - One of the reasons I believe most strongly that this will backfire is that while the accuser has been in desperate search to find anything that proves her story true, Judge Kavanaugh has been supported and uplifted by highly unusual groups of people for someone accused of sexual assault—women. Girls he dated, lifelong friends, women he has promoted through the ranks of the DC aspirational legal system, clerks that have worked for him for decades, those who attend church with his family, those who work with him in his efforts to tutor inner city youth, coach junior league basketball, and feed and clothe the homeless. To date literally hundreds of women that have known him with far greater consistency than anything Ford can claim and their claims are consistently superlative. From liberal Yale law professors who might disagree with him philosophically or politically, to the very women who have run his very life day to day. Overwhelming numbers of voices, overwhelming corroboration that he does not display behavior conducive to such claims.

His Reputation Counts - It’s not supposed to, but Constitutionally speaking it absolutely must. Brett Kavanaugh is a good man. And that’s putting it mildly. He has nary a blemish on his life of any sort. And while no human is perfect and biblically speaking we are all sinners at birth. This is a man who has by every measure possible attempted to pursue truth, live justly, and give back to those who have not enjoyed the blessings he lives gratefully with.

There is nothing Dr. Ford can say in her upcoming hearing that will provide any further evidence than her initial claims.

While many of us who have had sexual assault touch the lives of those nearest us, none of us wish to see any victim’s pain be exacerbated or extended.

Nevertheless significant cases in recent years have not only demonstrated legitimate assaults occurring against victims which needed to be exposed, there have also been widely publicized instances of victims naming the wrong persons as offenders be it by mistaken identity or criminal intention. (Think Duke Lacrosse, and NYU “mattress girl.”)

In the mean time, it appears increasingly like Judiciary Democrats in the U.S. Senate were more than comfortable in further exploiting the alleged victim in this case by ignoring both her right to confidentiality & pushing her forward into testimony that she has been at best “reticent” to participate in.

With each childish ploy, media hit, and campaign trail screed, it appears increasingly that America believes in its heart that not much has been accomplished here other than the naked political attempt to slander a good and decent man, simply to prevent him from taking his deserved spot on the nation’s highest court.

But she should confirm him!