Ways To Prevent The Next 'Alfie's' Murder

Kevin McCullough
|
Posted: Apr 29, 2018 12:01 AM
Share   Tweet
The opinions expressed by columnists are their own and do not necessarily represent the views of Townhall.com. 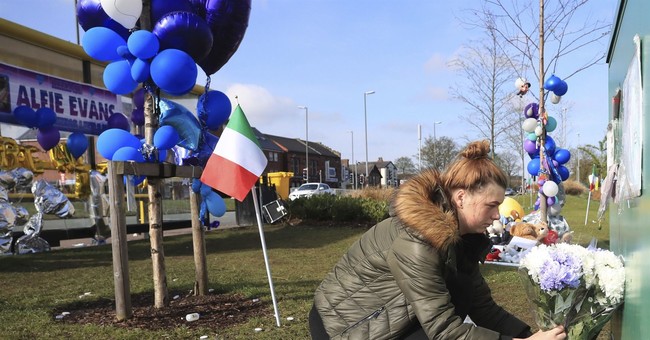 If you took sides with the British National Health Service in its systematic execution of the baby Alfie Evans, then you sided with and gave comfort to the most publicly documented murder in the modern era.

Incompetent physicians backed by arrogant death panels propped up by a completely leftist court system produced the anguish, tears, and mourning that came to it’s climax at 2:30am on Saturday.

How pathetic that a free world—celebrating the birth of Prince Louis Arthur Charles—stood by and did precious little about the court-enforced starvation and suffocation death of Alfie Evans.

The strength on display by his parents in restraining themselves from literally striking blows against every hospital official and attending physician that made decisions in Alfie’s restraining order & in being chained to his death bed is in itself miraculous.

As I have examined my own emotions on what I would feel in their shoes, I have discovered myself far to weak a human sinner to not have done all I could to free him and get him to the waiting Italian helicopter sent to save him.

But angry words and justified face slaps only accomplish so much.

The real point is how do we prevent the next family from having to experience this slow excruciating torture.

On that I believe some critical observations may help us.

1. KILL the Left’s Agenda: If anything led to Alfie’s unjust execution, if anything could be the most responsible for his outcome and if anything prevented getting the potentially life-saving care by medical professionals it was leftist politics. The insane policies in the United Kingdom that give the hospital and government more power than the parents in the care of a child is in itself the very embodiment of the oft-scoffed “death panels” argued against in the American national debate over whether to nationalize our health care system. In Alfie’s case a board overseeing his care, overrode the wishes of the parents, prevailed in a lower court and got a leftist appeals court to more or less ignore the case. If the protection of innocent life is the foundation of the free world, then everyone in it must understand that killing the vulnerable is a short step to killing anyone who becomes to difficult to deal with, care for, or just don’t like much anymore. And just to drive the point home, of all the voices that spoke out in favor of protecting Alfie, getting him continued care, and pushing the murderous British government into doing the right thing—were any of them prominent leftist, center left, or progressive voices? David Hogg screams about needing to take guns away from law abiding citizens, but sits silent as a government systematically strangled and starved a child far more vulnerable than those from Stoneman Douglas High School.

2. Produce Legislation That Protects Parents: It doesn’t take a rocket scientist to understand that if a nation doesn’t value the God-given structure and position of a family in the economy of their citizens, then their lives just don’t mean much. That Alfie’s parents were powerless to act on behalf of their son is simply unconscionable. If the new born prince born to William and Kate experienced all of the same issues, does anyone on earth believe that a court would have the power to stop them from seeking out every available medical option?

3. Get Faith Leaders Involved Earlier: That the rather leftist leaning Pope even came to Alfie’s defense is telling. That he convinced Italy to grant Alfie citizenship and sent a private charter helicopter is notable. But imagine if the Pope, Franklin Graham, the Patriarch of the worldwide Orthodox Church, and tens of thousands of pastors and priests had rallied to Alfie’s defense. Imagine if London had been forced to deal with a modern day civil right’s march on their turf. Imagine if weeks ago those leaders sought audiences with Prime Minister May and even the Queen. Imagine if the defense of innocent life gave rise to such decibels as to be unable to be deafened or stopped. Imagine if Christians of every variety, from every corner of the globe, organized local prayer chains, letter writing campaigns, and even traveled to the scene to encourage and help the family, or lobby parliament.

4. Speak Loudly, The Darker It Gets: One of the lessons we learned from the Waffle House shooting, the #MeToo & #TimesUp movements, the Cosby verdict, and from criminal and terrorism recovery counselors is that when attacked it is vital to take action and to speak up. When attacked harshly, because the attacker attempts to intimidate, speak louder. And as Rush Limbaugh has said on multiple occasions, “When they come to take away your every last freedom including speech, yell as though there is no tomorrow.” The truth is — there may not be. But those who seek to permeate evil on others can often be stopped when they meet resistance, and persistence in not being dissuaded. Eventually bullies are always overcome by the one who no longer allows themselves to be his victim.

5. Advocate Competence: One of the most stomach churning elements of the Alfie saga is the lack of knowledge about Alfie’s condition the “vaunted” socialized British NHS was supposedly able to render in his diagnosis. As of his time of death, they had not been able to identify his actual condition. Doctors in multiple countries desired a chance to examine him, to lend their considerable medical knowledge and credentialed heft to the process of helping just discover what Alfie’s condition was. Once identified, treatment options may have or may have not remained limited. Alfie might have even expired in the process of trying to discover. God is ultimately in charge of the number of days any of us gets. But for the mental and emotional health of his parents, and all of humanity it is a far healthier thing for us to have exhausted every option possible to save him—much less properly identify his condition.

6. Shame Those Who Fight Against Life: Those who don’t care about Alfie’s outcome—particularly those educated on the details of the narrative, are cancers to the human race. And I don’t mean that figuratively or symbolically. The shallow ninnies who celebrated and gossiped about the new born prince’s name prior to it’s release, the facebook posts that were both amazed or disturbed by Kate Middleton’s ability to leave the hospital seven hours after admission, the Hollywood executive who channel surfed his cable channel because Aflie’s story was too depressing, the wine and cheese parties that very academically discussed the “pros” and “cons,” the overwhelming number of people who never even bothered—these all deserve scorn. For they all prospered off the culture, economy, and planet while little Alfie could barely pass breath to and from his lungs after a government forced the removal of oxygen tubes that were mere inches away and guarded by police officers. Our abhorrence and even worse apathy towards the value of innocent human life is the worst strike against the character of this era of history. It rears itself in less notable ways all the time. But in Alfie’s case we are exposed for the self-obsessed, no-time-to-be-bothered, evil that we have been feeding on for a few generations.

My prayers tonight are said for Alfie’s family.

My efforts will be to prevent any family from knowing what they’ve known.

Will you join me, before it’s too late?