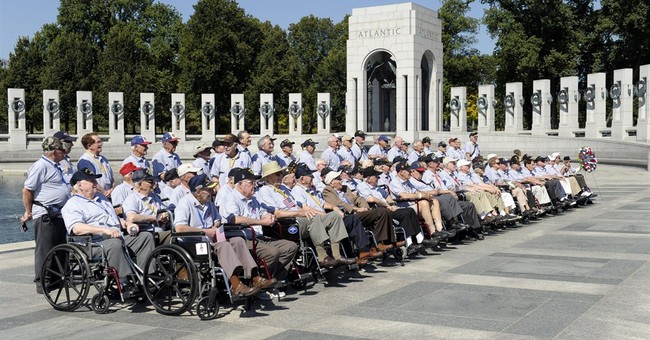 For much of this last week, according to the spokespeople for the National Park Service, the NPS has asserted that the White House specifically ordered that they barricade the open air memorial commemorating the sacrifice and service of the veterans of World War II. In multiple statements to the press NPS spokespeople made it clear that they were directly instructed by the White House specifically to shut the memorial that had previously never been closed.

How do you close something that by design is intended to be open 24 hours a day, 7 days a week, 365 days a year?

National Park Service personnel were also quoted in multiple press reports this week confirming that the White House orders were, "To make life as difficult for people as possible." Adding their own commentary in this thought, "It is disgusting."

On the first day of the shutdown, the White House ordered the open air memorial barricaded. When World War II veterans who were on previously scheduled trips to D.C. to see the memorial in their honor, saw the barricades, the staffers of the House Of Representatives members helped open up the barricades so as to allow these heroes to see the memorial the nation established in their honor.

The next day--obviously displeased that the veterans were allowed to have access--the White House raised the stakes and chained the barricades. The next day they wired them shut and sand bagged them. They even ordered additional work hours for the NPS to send more people to "guard" the World War II memorial.

Commentators drew the ironic and sad comparison that the President was far more concerned about "guarding" this open air area, than he had been in sending guards to rescue Ambassador Stevens the night of the attacks in Benghazi. And only in an upside down universe like an Obama administration would anyone ever believe that the World War II memorial needed "guarding" from World War II veterans to begin with.

Among the topics I've broached in recent years of broadcasts, none have riled the irritation level of the listeners to my 900+ affiliates anywhere equal to the Obama administration's specific targeting of World War II veterans as payback in the debate over the shutdown.

Nothing has come close.

The reasons for the blood-boiling outrage are simple. Here's a few that listeners have consistently written me about:

1. These are the last people in our society deserving of this type of treatment.

2. They paid for the memorial they wish to see with the blood of their own sacrifice, and that of their friends who never came home.

4. They will likely never have another chance to return to the nation's capital to view the memorial.

5. Many saved for much their lives to make this journey.

6. This memorial has never been closed.

So on the third day of this scandal that was deliberately targeting the greatest Americans in our midst, I began to wonder aloud on air, "Why?"

The Weekly Standard had published pictures of some of the other war memorials in Washington. None of them had a "security presence" anywhere akin to the World War II site. It wasn't until late Saturday that police removed observers from the Vietnam memorial. And the World War I memorial is still wide open for visitors.

So why World War II?

Add to that the late hour closing of the Iowa Jima memorial, and the decision on Thursday to close the Normandy and D-day Memorials and the pattern continued.

What was it about World War II that this administration felt the need to censor?

President Obama's grandfather, on his mother's side, served in WWII--enlisting in the hours following the attacks of Pearl Harbor. One of his great uncles served in the 89th Infantry and helped liberate a labor camp. (A story the president campaigned on (by error) in referring to later as liberation of the camp at Auschwitz.) And President Obama's great uncle and brother to his grandfather landed at Normandy on Dday plus 4 and fought his way through France, Italy and Germany before the war's end.

On his father's side, his paternal father was too young to serve in World War II as he was just a boy when the fighting broke out. But his paternal grandfather had fought in World War I, he became bitterly anti-British and converted to Islam following World War II and associated with banned organizations. He was tried for sedition and imprisoned. He refused to give information about the growing insurgency to the colonial westerners, and adopted the name Hussein.

How any of this family history plays into the rather explicit anti-colonial views of President Obama we are left to guess at. But one thing is clear. This president has taken great delight in targeting, hurting, and punishing veterans of World War II in ways this week few could have imagined under any circumstances.

The World War II memorial is my personal favorite memorial in Washington DC. Both of my grandfathers served the United States Navy during the war, and both would be disgusted at the pure manipulation of political power to punish the men they served alongside to keep the free world free.

In the days to come perhaps it would be fruitful for President Obama to negotiate with those he opposes, instead of punishing those he owes his liberty and life to.

And until that day arrives, we must do all we can, to express our thankfulness to all of those who have been willing to give the last full measure of devotion for the freedom we sleep under tonight!