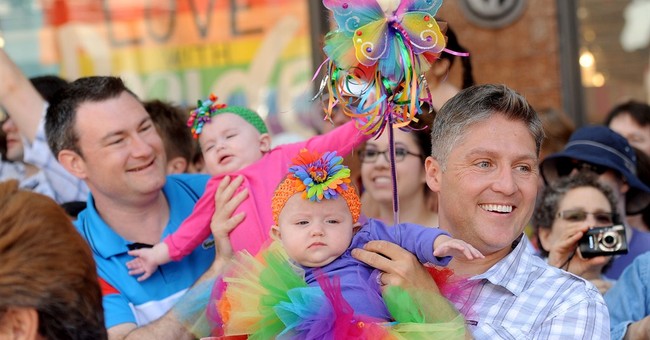 There is a coming showdown that will determine the soul of the republic. Not in fiscal or physical stature per se, but definitively in the arena of what has held America as unique for most of her history.

With the erosion of cultural norms to no longer truly recognize the difference between the moral and the immoral, the idea that such differences even matter cause college professors to laugh, and elementary teachers to ask your children "special" questions about the "teachings" of your family's faith.

Perhaps no where is this erosion more prevalent than the fact that grotesquely offensive public behavior is tolerated and encouraged to be on display under events labeled as PRIDE. (Anyone caught objecting to the nudity, public sex, and debauchery is immediately labeled hateful.)

This past week at a "pride" event in Seattle, participants in the events openly assaulted those they perceived to be opposing them on religious grounds. In the Seattle event--which is particularly relevant because it took place under American laws--two twenty-something young men, one holding a banner that had not a single word referring to "Pride" or "homosexuality" - but did utilize the words "Jesus" and the most offensive of all "repent"--were savagely attacked by those attending the "festivities.

In a similarly recent event in Toronto a mob swarmed similar youth, displaying a similar message. In April a group who labeled themselves "Angry Queers" attacked Mars Hill Church in Portland battering windows with baseball sized rocks destroying nine of them. And of course last year an admitted activist intended to shoot and kill dozens at the offices of a Washington think-tank who advocated primarily on behalf of American families. His calling card was to leave a "Chic-fil-A" sandwich on the body of each of his victims.

What is clear through this litany of activist oriented violence against people of faith is the intention.

Pride participants and sexual activists wish people of faith to be silenced. The intolerance with which they insist upon runs directly contrary to the tolerance which they constantly say they are in need of.

But the principles will likely be coming to an even more defined confrontation legally and culturally soon. As activists have declared that the "Employment Non-Discrimination Act" must be passed and made law, they are also simultaneously begging President Obama to act by executive fiat and to not wait for the legislative process.

In a piece authored recently by Liz Abzug and Heather Cronk, they openly suggest that the President create a law that would prevent employers from being able to hire someone based on their personal view of morality--specifically declining anyone a job merely because they engage in homosexual sexual behavior.

Let me pose an example...

Say you're a store operator and you hire a stock room professional whose sexuality you don't know about, nor care about when you hire him. Simply wanting a stock room professional who can see to it that inventory is where it is supposed to be is normally thought to be sufficient. Turns out, your stock room professional ends up having a same sex boyfriend, who frequently stops by, gives him a little "have a great afternoon" kiss in front of customers at the end of his lunch hour, and now your customers--particularly those with kids are stuck being exposed to something they don't wish to be. You ask him to not engage in the behavior any further--he challenges you to do something about it--so you fire him for damaging the reputation of the business. But he sues you and under ENDA--WINS--because they perceive your termination of him was based on his state of being. But it wasn't, you fired him for behavior that was unbecoming the welfare of your business.

You're a pastor at a church who is looking to hire a youth ministry director. In these times, it is prudent for church staffs and all organizations that work with youth of any sort to do background checks. At this particular church you have homosexual activists who have specifically targeted this hiring process. Knowing the church's doctrinal statement opposes homosexual behavior, the church communicates that it must only hire staff persons who agree with the doctrinal and theological positions of the church. A person who engages in homosexuality applies for the job, is declined and sues the church under the terms of ENDA.

And so the conflict is enjoined.

The direct belief that homosexual behavior must be allowed, codified, and agreed with as morally straight by everyone vs. the belief that God grants a quite narrowly defined view of sexuality that should be encouraged.

The courts will have little understanding of how one's sexual behavior could threaten the sanctity of faith, mostly because there are so few people of faith on the courts.

Churches will refuse to codify homosexual behavior as moral, and activists will sue, protest, and as we've seen recently turn violent and ugly.

How does it end?

Not terribly sure, but the conflict is coming.

And thanks to the President, the Supreme Court, and a cultural temperature set at "if it feels good do it" it doesn't look good for those who fear God.

Though that is the beginning of wisdom...